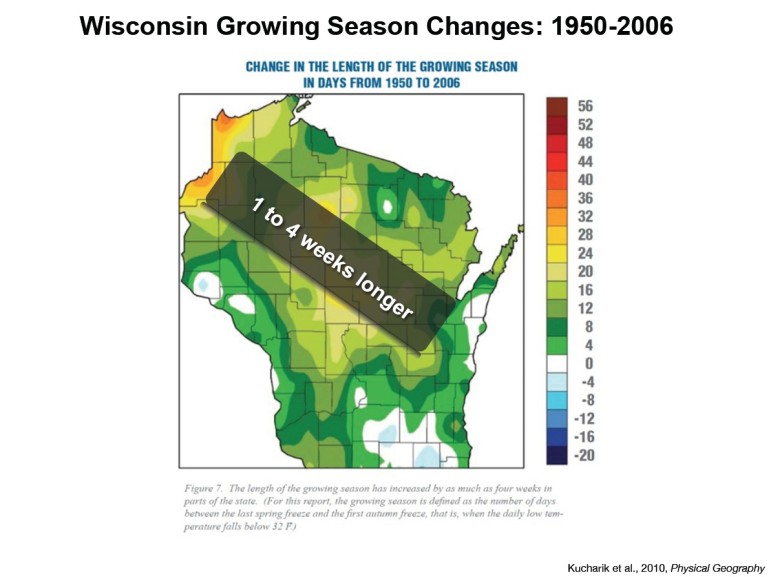 Excerpt from a presentation by University of Wisconsin-Madison agronomy professor and climate researcher Chris Kucharik about climate change’s effects on Wisconsin agriculture.

This story is part of the Wisconsin Center for Investigative Journalism’s ongoing coverage of water quality and quantity issues in Wisconsin. See more at the Center’s endocrine disruptors and groundwater quantity project pages.

Most Wisconsin farmers remain skeptical about climate change, although data show they have already begun adapting to shifts in weather patterns, scientists said at a University of Wisconsin-Madison conference this week.

Farmers, the scientists said, are key actors in adapting to climate change or mitigating its effects. They manage 61 percent of the nation’s land. They are vulnerable to droughts, cold, heat and hail — crop insurance paid out $17.4 billion dollars in indemnities nationwide after the 2012 drought.

“Farmers are at ground zero for climate change,” said Paul Mitchell, an associate professor of agricultural and applied economics at UW-Madison, speaking Thursday to more than 100 academics and others at the university’s annual Sustainability Forum.

But they do not believe in it, by and large. 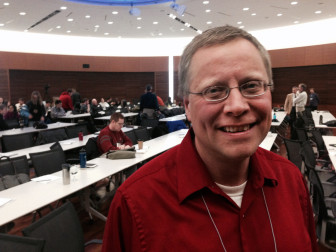 In a 2009 four-state survey of about 1,300 farmers, published in the November 2013 Journal of Agricultural and Applied Economics, less than half of farmers agreed that climate change had been scientifically proven.

The findings are consistent with another national study from 2012, which found 60 percent of farmers believed climate change was either mostly natural, not happening, or they were uncertain about it.

Other studies have shown about two-thirds of the general public believes in climate change.

While there were differences in perceptions based on age, education, farm size and other factors, Mitchell said the clearest finding was that farmers across a broad geographical swath — Mississippi, North Carolina, Texas and Wisconsin — had similar beliefs, with a little less skepticism in North Carolina.

The survey, conducted by the National Agricultural Statistics Service, had a 23 percent response rate. It omitted the smallest 20 percent of farms in each state.

The survey did not examine the reasons behind farmers’ views, but Mitchell said he had seen enough controversy to know that “it’s not a scientific issue; it’s a political position.”

The Intergovernmental Panel on Climate Change, a United Nations-established body that assesses the state of climate science, says climate change is under way and it is “extremely likely” that humans are the cause.

Global temperatures have risen about 1.5 degrees Fahrenheit since 1900, most in the last half-century. Wisconsin’s warming has roughly followed global patterns, and temperatures are likely to rise 3 to 9 degrees by midcentury.

In Wisconsin, climate change over the past half-century has meant fewer very cold winter nights, more annual precipitation overall, and a steady rise in the number of extreme rainfalls.

For farmers, the growing season has lengthened by one to four weeks since 1950.

Corn and soybean yields have risen, as has year-to-year variability in those yields. Some of the increase is due to better practices and technology, but earlier planting explained nearly a quarter of the increase in yields from 1979 to 2005, according to data from Chris Kucharik, a climate researcher in UW-Madison’s agronomy department who regularly gives talks on climate change to farmers and others.

Climate change could also affect weed and pest infestations and dairy productivity, according to the Wisconsin Initiative on Climate Change Impacts, a public-private network intended to “generate and share information that can limit vulnerability to climate change.”

“Farmers that have spent 40 days in wind chills below zero have a hard time translating climate change to their personal life.”
— Ben Brancel, DATCP Secretary

DATCP: ‘You lost the farming community’

Mitchell’s study calls the climate change debate “one of the most fundamental political debates of our era.”

A web search turned up a handful of results, one of them including the state Farm Bureau’s terse official position on climate change: “We oppose climate change legislation at the state level that would increase costs to production agriculture. This issue needs to be addressed at the national and international levels.”

The group did not respond to calls Thursday afternoon or Friday morning.

Ben Brancel, secretary of the Department of Agriculture, Trade and Consumer Protection, said he could understand why farmers were skeptical and said academics must “convince them that climate change is real in their world.”

“Farmers that have spent 40 days in wind chills below zero have a hard time translating climate change to their personal life,” he said.

Brancel agreed with Mitchell that it was time for a different tack.

“You lost the farming community,” he told the audience. 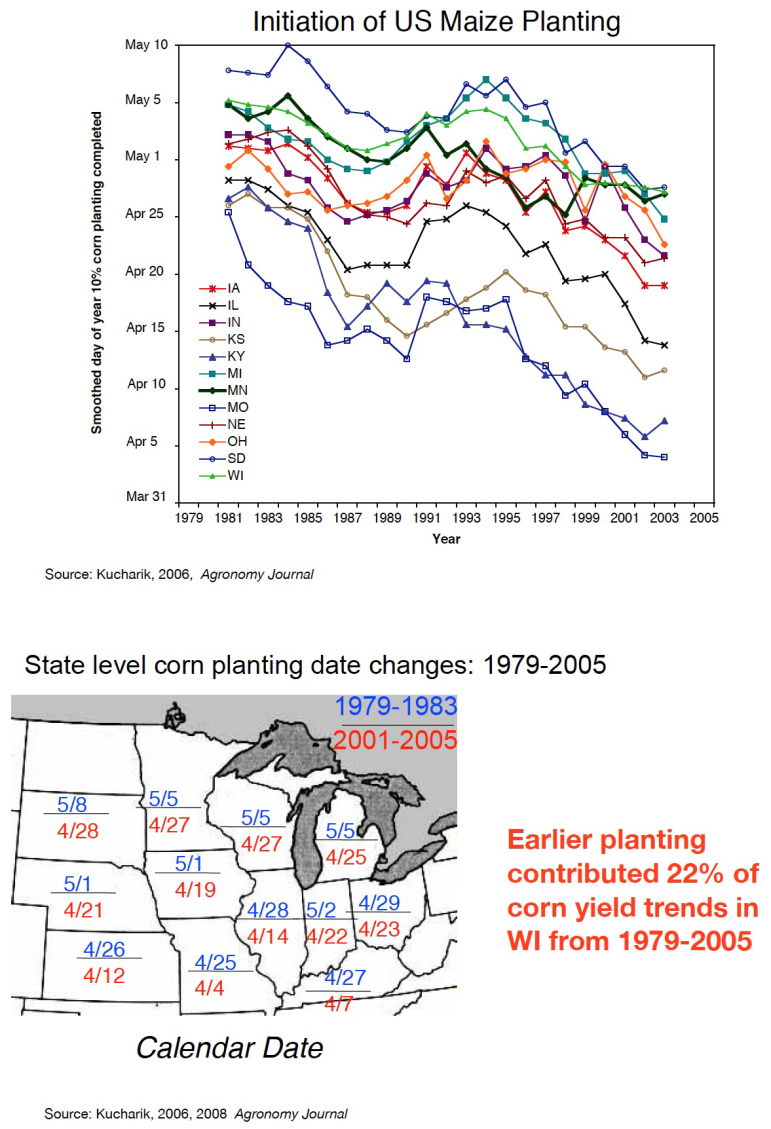 Brancel suggested that researchers talk to farmers about how to use less nitrogen and phosphorus, rather than climate change.

More heavy rains are expected to increase runoff of these nutrients, which cause murky surface waters, dead zones and fish kills.

Farmers will reduce usage if they can, because they will save money, Brancel said.

Whatever they believe, Kucharik said, farmers are already adapting.

“Most of them will say no, I’m not really doing anything different. But the facts show that they’re planting earlier and earlier for their summer crops,” Kucharik said.

Kucharik said he tries to stress facts that farmers can relate to, like extreme weather events.

Mitchell’s strategy: Talk about the weather, a safer topic. Focus on adaptation — not mitigation, since that would require them to acknowledge humans have caused climate change. Listen to farmers, who have plenty of their own ideas about what sustainability means.

And focus on opportunity, he said. Like new potential markets.

“We used to have a large lettuce industry, but the Californians drove us out of business,” he said. “Maybe a drought or two (there) will drive us into business in lettuce.”

This project, part of Water Watch Wisconsin, was supported by The Joyce Foundation. The nonprofit Wisconsin Center for Investigative Journalism (www.WisconsinWatch.org) collaborates with Wisconsin Public Radio, Wisconsin Public Television, other news media and the UW-Madison School of Journalism and Mass Communication.

2 thoughts on “Even while adapting, most Wisconsin farmers are climate skeptics”