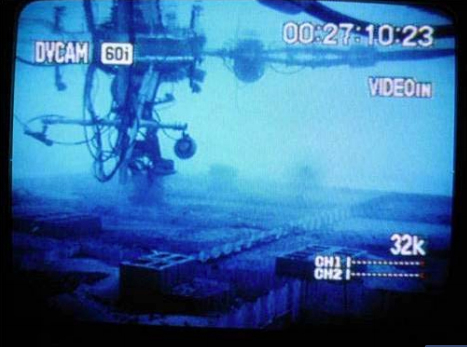 A view from the camera of a manned submersible designed to recover heavy oil by Marine Pollution Control. Photo excerpted from USCG report CG-D-09-13 (PDF), June 2013

Technology for cleaning up sunken oil is inadequate, and that may be because few submerged oil spills have caused prominent damage, said the authors of a U.S. Coast Guard research and development report from June 2013.

But the potential for harm is severe. Heavy oils can destroy shellfish and other aquatic life, clog up water intakes at industrial facilities or power plants, and appear without notice on shorelines and in sensitive areas.

In 2011, the Coast Guard tested, off New Jersey’s shoreline, three prototypes for finding, mapping and recovering submerged oil, from three companies that each spent a year on the problem.

The idea was to replace the traditional method of divers using suction hoses to pump oil to the surface.

Safety, endurance or visibility issues may plague the efforts. And water and sediment tends to come up along with the oil.

One of the prototypes was a remotely operated vehicle called the Sea Horse — for Seagoing Adaptable Heavy Oil Recovery System, developed by Alion Science and Technology Corp.

Marine Pollution Control developed a manned submersible that could go deeper and stay down longer than a diver, but was too expensive to test.

And the Oil Stop Bottom Oil Recovery System Group designed the Ninja Mini-Dredge, which weighed 3,000 pounds and could hurt the subsurface floor, but could handle harsh wind and waves.

“Of all the strategies in traditional oil spill response that increase success, the timing of getting the appropriate equipment on scene will be a major challenge in maximizing response efficiency and effectiveness,” the report said.