Screenshot of a 2010 email from Walker aide Cindy Archer to others in his inner circle.

The emails were gathered as part of a now-closed John Doe probe that led to criminal convictions of six individuals, including three top Walker aides. They cover most of 2010, the year Walker was elected governor of Wisconsin. 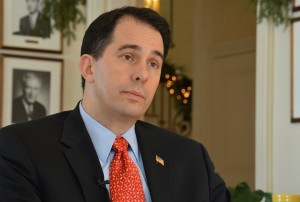 Walker and his staff felt beleaguered by the volume of records requests from political opponents, and at times expressed scorn for the requesters. But they also discussed ways to use the law to their advantage and asserted their commitment to obeying it.

“Attached are some open records requests from the Democratic Party,” wrote Walker aide Cindy Archer in an email dated May 27, 2010, at 6:01 a.m. “I will hold my personal commentary because it is too early to elevate my blood pressure.”

On June 7, 2010, Walker himself wrote Milwaukee radio host Charlie Sykes to expound on the volume of records requests received by his office. He said it got several requests a week from the Democrats and the liberal advocacy group One Wisconsin Now, among others.

Walker added that “the other GOP candidate” for governor — former Congressman Mark Neumann — “is asking for almost all of the same info as the left (in nearly identical requests).” He suggested that Sykes “make an Open Records request to my office” to obtain the requests made by others.

Another email, from Walker deputy chief of staff Kelly Rindfleisch to Walker campaign manager Keith Gilkes, discusses a request from two Milwaukee Journal Sentinel reporters for records regarding the collapse of a parking garage in a county park, which killed a 15-year-old boy.

“SKW is anxious to get them what they want,” Rindfleisch wrote, referring to Walker by his initials.

On another occasion, Gilkes advised Rindfleisch on how to respond to a particular requester: “Just give him a number of what the contract cost — just something that fulfills the request without giving him anything.”

These and other emails show extensive communication and coordination between Walker’s county executive and campaign staff. Rindfleisch was charged in connection with the John Doe probe and convicted of a felony for doing campaign work on county time. Her six-month jail term is suspended pending appeal.

As previously disclosed, Walker staffers established a separate secret system from communicating using laptops and a wireless router. The most explosive new revelations in the emails is a message from Archer to Rindfleisch suggesting that Walker was aware of this secret system.

“I use this private account to communicate quite a bit with SKW and Nardelli,” the email states, referring to Walker’s chief of staff Tom Nardelli.

On July 27, 2010, Rindfleisch wrote Gilkes to vent her frustration over inquiries being made by Milwaukee Journal Sentinel reporter Dan Bice into a county supervisor who was charged more than $2,800 by Walker’s office for a records search that yielded four pages.

“He’s going to spin it as we’re charging this outrageous amount and the public has a right to know,” Rindfleisch wrote. She had a better idea: “Spin it as this jackass spent $2,800 of taxpayer money and wasted hours and hours of county employees’ time on a political fishing expedition.”

As previously reported, an email obtained from the John Doe probe and released last year has Archer pondering whether the office was responding too promptly to records requests, given the allegedly tardy handling of these by Walker’s Democratic rival for governor, Milwaukee Mayor Tom Barrett. She said her sense from Gilkes “is that we should be operating one step above ignoring them.”

The newly released records show that this prompted an internal discussion among staff, with some staffers warning that Walker would take the blame for any delays in records compliance.

This discussion drew a sharp rebuke from Nardelli, who wrote: “Just in case anyone cares what I think as COS (chief of staff), let me assure you all that Open Record Requests will be handled as they have always been handled: Timely, Courteously, and with the detail (county legal staff) requires both upon receipt and upon release.”

Nardelli said the office’s handling of record requests “should not and will not be about how anyone else handles their requests.” He signed by name and title: “Chief of Staff (remember?).” The email was sent to Rindfleisch and Archer, among others, with a copy to Walker.