Few legislative causes have drawn as much interest and as little traction as redistricting — the drawing of new voter boundaries after each 10-year census.

The Republicans who control the state Legislature have rebuffed pressure to hold hearings on bills, AB 185 and SB 163, to shift responsibility for this task from politicians to the Legislative Reference Bureau, a nonpartisan state service agency.

And so, two of the bill’s main backers, Sen. Dale Schultz, R-Richland Center, and Sen. Tim Cullen, D-Janesville, on Feb. 10 held a “public meeting” in a packed room at the state Capitol.

Among those appearing, via Skype, was Ed Cook, legal counsel for Iowa’s Legislative Service Agency, which has run nonpartisan redistricting in that state since 1981. He said the process “has really stood the test of time” and proven popular.

Districts are redrawn using objective criteria, subject to legislative approval. “We do not look at any political information,” Cook said, such as where current lawmakers happen to live or which party a district’s voters tend to support. 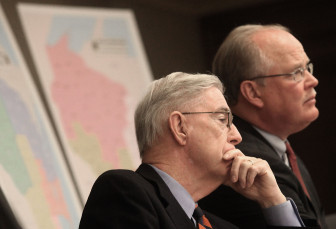 The cost of this process, Cook said, is “not significant.” No approved map has ever been challenged in court. Some districts still lean Republican or Democratic but, Cook boasted, “redistricting doesn’t get in the way of a trend in an election.”

In other words, the fortunes of Iowa’s political parties hinge on how much support they receive at the polls, not how cleverly they manage to carve out districts to their advantage.

The last redistricting, after the 2010 census, cost taxpayers more than $2 million and, as usual, was challenged in court. Mayer said the maps were “carefully drawn to maximize the partisan advantage for the Republican Party,” adding that Democrats “would have done the same thing” had they been in charge.

In the 2012 election, Republicans increased their control of the state Legislature despite getting substantially fewer total votes than Democrats. This was done, Mayer said, by packing Democrats into safe districts while creating a slight edge for Republicans in many more.

The result, charged Schultz, breeds public anger and mistrust: “They know that the system isn’t fair.”

Hypothetical nonpartisan maps produced by the Legislative Reference Bureau at Cullen’s request show how different things could be. The redrawn districts are much cleaner (for a side-by-side comparison, see tinyurl.com/mfn9a4p) and more competitive.

Had these maps been in place in 2012, Cullen’s analysis found, 28 Assembly and five Senate races would have been decided by a 6-point margin or less. In the actual election, only 11 Assembly races and one Senate race were this close.

Overall, the new maps would have favored legislative Democrats in 2012, consistent with their vote totals. But in 2010, a banner year for Republicans, the GOP would still have come out on top.

The antipathy of state Republicans to altering a system that has worked to their benefit is undiminished. Aside from Schultz, no GOP lawmaker supports a resolution calling for an advisory referendum on nonpartisan redistricting.

Chad Weininger, R-Green Bay, one of the committee chairs blocking a hearing on AB 185, has denounced it as a “gimmick,” since the Legislature would not have to follow this method. Mayer conceded the point, but only in the sense that lawmakers can always pass new laws. By this standard, he said, “virtually everything the Legislature does is a gimmick.”

At the hearing, Schultz, who is not seeking reelection, said every candidate for state office should be asked about redistricting. Cullen, who is also stepping down, said it was an issue which the public, not politicians, must take the lead.

“This is going to be a bottom-up solution,” he told the crowd. “It will not come out of this building. It will come from all of you.”