A recent article on a decorated military veteran seeking a pardon from Wisconsin Gov. Scott Walker drew a cheap shot from an online commenter: “If he is serious (about) getting special treatment from Walker, he simply needs a lot of cash to donate.”

In fact, the Republican governor’s bold stance against any and all pardons takes this scenario off the table.

“Gov. Walker supports the court system and does not want to undermine the actions of a judge or jury,” spokeswoman Julie Lund said in an email. He has other priorities besides issuing pardons, which “is not a requirement of the job.”

Critics say pardons are an important task, not an insult to the justice system. The case involving the veteran, who served tours of duty in Kuwait and Iraq, casts this into sharp relief. (For statewide coverage, see pardoneric.com).

In September 2004, two days after returning from the Middle East, Cpl. Eric Pizer of Madison intervened in a dust-up between his friend and another man. He punched the man once, breaking his nose. 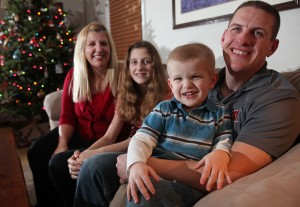 “He was trying to protect himself and others,” says Pizer’s attorney, David Relles, whose client had no prior juvenile or adult record.

The Grant County District Attorney’s Office charged Pizer with substantial battery, a felony; he pleaded no contest and served two years on probation. The conviction bars Pizer, now 32, from his dream of becoming a police officer.

Relles, a former prosecutor, believes the charge was excessive. Had these events happened more recently, he notes, the conviction could have been expunged due to a change in state law, or perhaps avoided altogether through the state’s network of veterans treatment courts.

The Grant County DA’s office, which in 2011 accused a 6-year-old boy of first-degree sexual assault for playing “doctor” with a 5-year-old girl, has refused to reduce Pizer’s charge, although it once offered to do so if Pizer signed up for a new tour of duty.

That leaves Pizer at the mercy of Gov. Walker. Says Relles, “I’m hoping he will open his eyes and open his heart.”

But Walker, since taking office in 2011, has mothballed the state’s Pardon Advisory Board and granted no pardons. His five predecessors, Republicans as well as Democrats, pardoned more than 800 people.

Margaret Colgate Love, the U.S. Justice Department’s lead pardon attorney under Presidents George H.W. Bush and Bill Clinton, says that while other governors have been stingy with pardons, none has matched Walker in forswearing them altogether.

“I can’t think of another governor who has so obviously said, ‘I’m not going to do my job,’ ” says Love, now an attorney in private practice in Washington, D.C. “Other states with which Wisconsin compares itself have a thriving pardon business, and it’s a very useful part of their justice system.”

Another national expert on the topic, P.S. Ruckman Jr., a professor of political science at Rock Valley College in Illinois, says the power to pardon “is part of our system of checks and balances.” He sees Walker’s refusal as an abdication of executive responsibility — one that could entail political risks.

During the 2008 Republican presidential primary, former Massachusetts Gov. Mitt Romney boasted that his standards for pardons were so high he granted none at all. He used this in a campaign ad attacking a fellow GOP presidential hopeful, former Arkansas Gov. Mike Huckabee.

Huckabee, like Walker a possible presidential contender in 2016, hit back. He noted that Romney declined to pardon a man who shot his friend with a BB gun at age 13, before joining the Massachusetts National Guard and serving in Iraq. The man sought a pardon because he wanted to become a cop.

“Now, let me ask you something,” Huckabee postulated. “Do you want a president who will (care) more about his best political interests than he would the future of a kid who had gone to war for this country?”