Don’t get him started.

Wisconsin Gov. Scott Walker, asked if he thinks politicians including himself are as susceptible to the corrupting influence of money as the labor unions he bashes in his new book, has plenty to say — about the labor unions.

“Whether it’s a Democrat or Republican, in so many of these cases, folks have a freedom to associate, they have a freedom to choose,” Walker told the Wisconsin Center for Investigative Journalism in a recent interview. “What I fought about with public employee unions is they didn’t have that freedom.”

Before the changes he pushed through, state and local public workers had no choice but to contribute to their unions. “You have money that was forcibly taken from people without them having any say about that,” Walker said. “That’s where I thought the corruption was.”

The book, “Unintimidated: A Governor’s Story and a Nation’s Challenge,” is fervent in its denunciation of money as the unions’ master.

Union leaders, charged Walker, “would rather have seen us take the money from the poor, lay off middle class workers, undermine education, and decimate government services — just so long as we did not close the automatic spigot of cash that was filling their union coffers.” 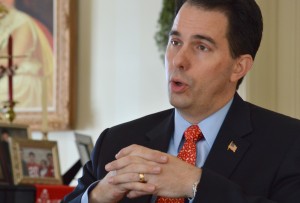 Yet on the cusp of what may be a hugely expensive 2014 governor’s race, Walker sidestepped the question of whether politicians who need to raise large sums might also be led astray.

Arguably, the will to please big-money donors led to two of Walker’s greatest missteps — his comments to businesswoman Diane Hendricks about his plan to “divide and conquer” public employee unions, and his embarrassing remarks to a prankster pretending to be billionaire industrialist David Koch. But he didn’t want to go there.

Walker was more forthcoming in addressing why, in the lead-up to his 2012 recall election and afterward, through the last reporting in mid-2013, the majority of his campaign contributions came from people in other states.

“It was people here and across the country who looked at the protest, who looked at the recall, who thought it was an abuse of power, who went out of their way to say, ‘You know what? I’m going to send $25 or $30 or $40 to help someone out.’ ” He added that these out-of-state donors “don’t have any skin in the game. There wasn’t anything they wanted or desired out here.”

Of course, much of  Walker’s total receipts have come from big-money donors, some of whom are cheering his agenda on unions, school choice and other issues. But the governor’s spin on these donations is politically astute.

Walker was noncommittal about a bill that passed the state Assembly and awaits action in the Senate that would, as amended, double the maximum individual contribution to candidates for state office, including governor.

“I haven’t advocated for it,” he said.

He made the same point about a bill to eliminate the requirement that candidates disclose their major donors’ principal place of employment. In the past, Walker has championed campaign disclosure: “The more transparency involved, the more people could hold folks accountable.”

He may still feel that way, but passed up a chance to criticize a bill that would seriously undermine donor transparency in Wisconsin.

Finally, while Walker said his book has gone into a third printing, apparently nothing has been done to correct admitted mistakes, noted in this column. (Walker’s spokesman and the book’s publisher did not respond to requests for  comment.)

In one case, the spending on recall races by Senate Republicans and their supporters is vastly understated. In another, the book says “Democrats and their union allies” spent a huge sum against a GOP state senator, when in fact the figure cited represented spending by both sides, led by the senator and her supporters.

An error left uncorrected after it is pointed out is no longer an error.