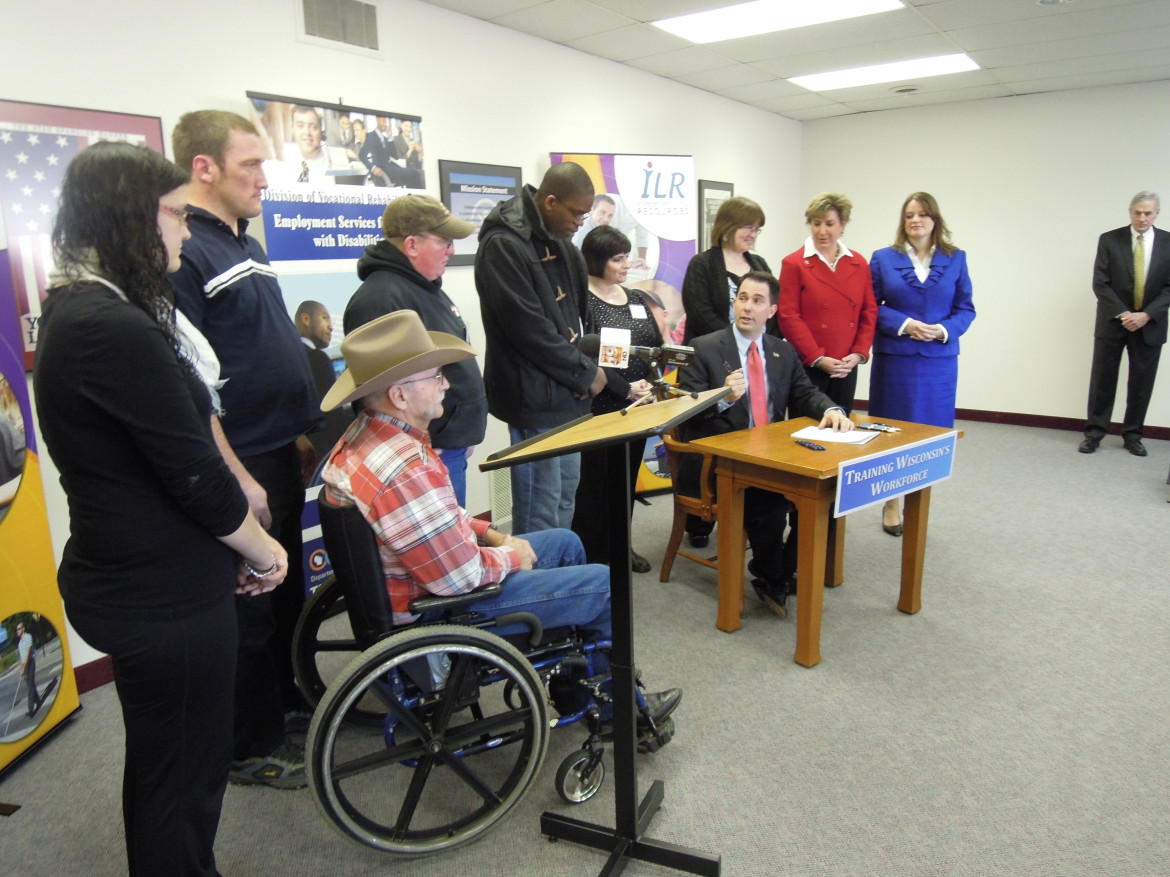 Gov. Scott Walker hands out bill-signing pens to workers who found jobs through the Division of Vocational Rehabilitation.

Walker said he changed his mind about seeking more federal funding as the state’s own finances improved.

“Looking at the options that we had, looking at the growing amount that we had available in terms of surplus because of the economy and the revenue coming in, we thought this was an appropriate fit,” Walker said at a ceremony at Independent Living Resources in La Crosse, an agency that assists people with disabilities.

“It wasn’t a matter of being for or against, it was a matter of saying we had resources available as we went into the fall session.”

The legislation enjoyed overwhelming bipartisan support and was approved by the Republican-controlled Assembly and Senate in November after Walker announced his backing. It is part of a broader package of bills aimed at strengthening the state’s labor market.

In a news release, Walker thanked two Democrats — Sen. Jennifer Shilling, D-La Crosse, and Rep. Katrina Shankland, D-Stevens Point — for authoring the measure. “This legislation is great news for people with disabilities, who want the independence that comes with having a job,” Walker said in the statement, touting increased services to job seekers as well as employers.

The measure allows the state to obtain more federal funding for the Division of Vocational Rehabilitation, an arm of the Department of Workforce Development that helps people with disabilities find employment in Wisconsin.

According to Walker’s office, Wisconsin will put up an additional $4.2 million in state funds for the agency over the next two years to allow the state to secure $15.5 million in new federal funding to cut waiting lists and expand job opportunities for unemployed workers with disabilities.

That is in addition to the $15.1 million the state originally put forward in order to receive $55.6 million in federal funds for the program.

Advocates have credited a report by the Wisconsin Center for Investigative Journalism in July with helping to change Walker’s stance.

Lisa Pugh, public policy coordinator with Disability Rights Wisconsin, an advocacy group, said the report raised awareness of the issue. “I also think it was embarrassing for our state to say we were leaving this money on the table,” Pugh said.

More than 3,000 people with disabilities are currently awaiting access to DVR services. According to an analysis by the nonpartisan Legislative Fiscal Bureau in May, DVR could nearly eliminate its waiting list over two years with full federal funding.

A similar proposal put forward in May was voted down along party lines by the Legislature’s Joint Finance Committee, with Republicans siding with the governor’s recommendation to fund DVR at the minimum federally mandated level. Walker changed his mind and announced his support for the new proposal in September.

Rep. Dean Knudson, R-Hudson, voted against fully funding the agency when the vote came up in May, but voted in support when the proposal was considered, with Walker’s support, in October.

Knudson, like Walker, said the necessary state funds were not available in May and now the state is “in a position to go back and revisit that and say, ‘Of all the places that you could spend money, here’s one where for every dollar we spend we get essentially a four dollar match from the feds.’ ”

Department of Workforce Development Secretary Reggie Newson said in an email that the agency was grateful for the shift in funding, saying it will help DVR move thousands off the waitlist.

“Everyone who wants to work should be able to do so,” Newson said.

Wisconsin Public Radio reporter Maureen McCollum contributed to the reporting of this story.