Two of our amazing former interns sent in video testimonials about how much their Center experiences meant to them.

Here’s Jacob Kushner, who started work in 2009 as one of the Center’s first interns. Kushner produced our Dairyland Diversity series, examining the implications of Wisconsin dairy sector’s growing reliance on immigrant labor. Since then he’s reported from Haiti and Kenya, and he recently produced an e-book, China’s Congo Plan.

Here’s Kushner — squeezed into a train car in Kenya.

Bonus: Kushner also sent in this photo of him at work. (Kushner, known for his healthy appetite, heavily promoted the establishment of Guacamole Fridays at the Center.) 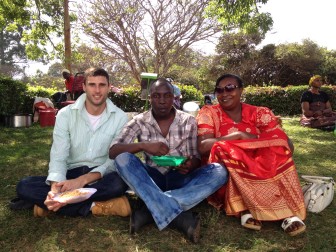 Next, Lukas Keapproth. He was our first — and so far only — visual journalism intern. He photographed the Walker vs. Barrett rematch, Wisconsin’s frac sand rush and Mario Koran’s story on the unreliability GPS devices used to track offenders.

He’s in a very different place these days, though.

This year we paid our interns $46,000. But we need your support now to keep this educational program from shrinking. Support the Center today with a donation.