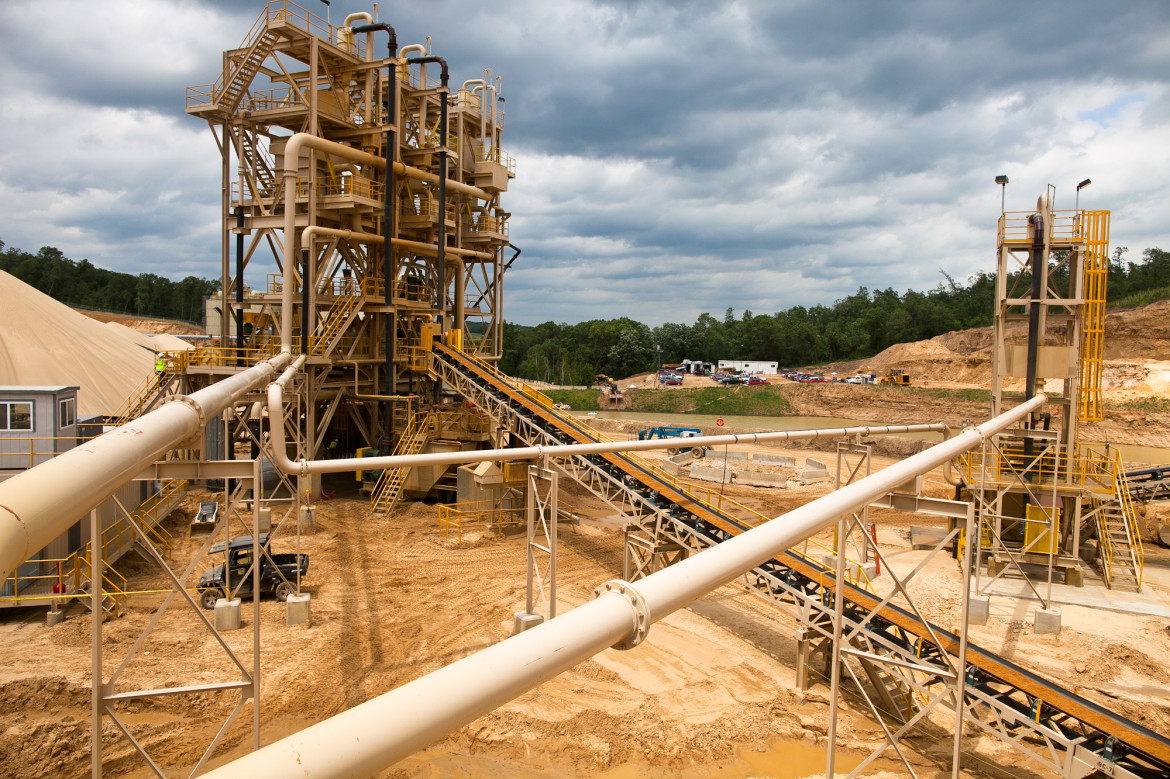 From bottom right, a conveyor carries sand from the crushing area to a wash plant tower to be washed and sorted by grain size at the Preferred Sands plant in Blair, Wis., on June 20, 2012.

Frac sand mining company Preferred Sands of Wisconsin has been ordered to pay $200,000 for stormwater and air permit violations at its facility near Blair, a Trempealeau County city.

This is the first civil judgment brought against a frac sand mining company in Wisconsin, state Department of Justice spokeswoman Dana Brueck confirmed. The company will pay in installments, the final one due in 2017, according to documents released Monday.

Wisconsin leads the nation in production of frac sand, a key ingredient in the process of hydraulic fracturing, or “fracking,” in other states. The sand, along with water and chemicals, is pumped deep underground, holding open fissures in the rock to allow oil and natural gas to escape.

In May 2012, a plume of sediment-laden stormwater left the Preferred Sands site and flooded a creek and an adjacent wetland, according to a complaint filed by state Attorney General J.B. Van Hollen and Assistant Attorney General Cynthia Hirsch.

Sediment also traveled over nearby properties, including through the first floor of a home and into a garage on another property. A road was left with a 6-inch-deep layer of sediment.

The company said in a statement that it acquired Winn Bay Sand in 2011, including the Blair plant. At that time, noncompliance concerns were identified. The statement said Preferred Sands disclosed the issues to the Wisconsin Department of Natural Resources.

The DNR determined that waste piles of sand had been too high and too steeply sloped, according to the complaint.

The 2012 events followed a 2011 incident in which a neighbor saw excessive runoff and sediment coming off the site. At that point, the facility was operated by Winn Bay, which later acknowledged that its stormwater detention pond was too small, the complaint said.

In its statement, Preferred Sands said storms in 2012 exacerbated some of the “inherited matters” but that it resolved those problems and worked to prevent others.

The Wisconsin Center for Investigative Journalism also reported in March that the company was cited for violating its air quality permit. It was emitting too much particulate matter, according to the complaint.

In its statement Preferred Sands said the plant is now compliant with all stormwater and air permits.

Despite the size of the penalties, an environmental attorney doubted their impact.

“Given how much money companies are making and the amount of time it took for the settlement to be finalized, I don’t know that (the judgment) provided the deterrent impact we need,” said Sarah Williams, a staff attorney at the Madison-based law firm Midwest Environmental Advocates, which has represented residents upset about the operations of Preferred Sands.