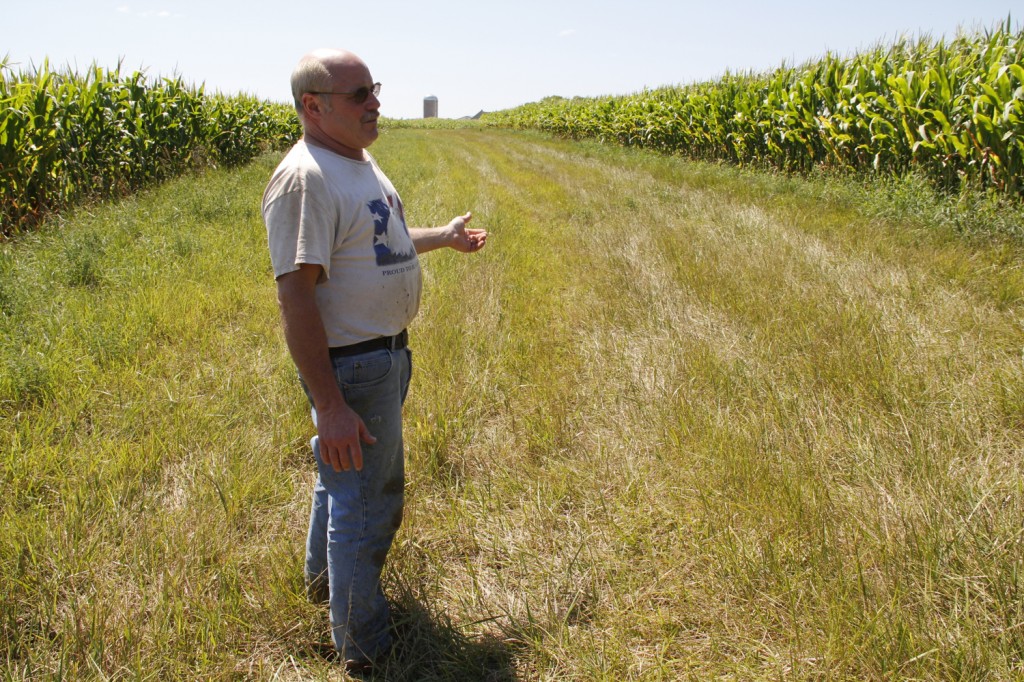 Kewaunee County dairy farmer Chuck Kinnard walks a grassed waterway on his land, built to keep runoff from contaminating groundwater, in July 2012. Like many farmers here, he is acutely aware of what a thin layer of soil protects the bedrock below.

Stories and multimedia at the Center’s endocrine disruptors project page.

Below: Take a tour of the Holsum Dairies manure digester.

If manure made wells estrogenic in northeast Wisconsin, there are two solutions: Get the hormones out of the manure. Or prevent manure from polluting the groundwater in the first place.

“A well-managed place is not going to get manure into the groundwater,” said Laurence Shore, a physiologist in Israel who studies the fate of hormones in the environment.

Simple measures already used by farmers prevent water pollution. They can avoid applying manure on grass buffers alongside streams, or build grass waterways between crops to soak up runoff.

Bill Hafs, a former Brown County conservationist, says that best management practices are often unpopular, in part because of cost.

Holsum Dairies installed this manure digester to reduce odor, make heat and electricity. But research suggests another possible benefit — that hormones from cows may break down in it.

The state requires large farms to have nutrient management plans to limit pollution, but county conservationists strapped for time stick largely to complaint-based enforcement, Hafs said. Small farms need not comply with nutrient management requirements unless the state pays 70 to 90 percent of the cost.

Other methods include composting manure and using anaerobic digesters, in which bacteria turn manure into biogas. They also can break down hormones in manure, Shore said.

“Just for estrogen alone, you wouldn’t justify (composting). But it solves lots of problems,” Shore said. “Composting, it destroys everything.”

But few Wisconsin farmers currently compost their manure, according to the DNR. Most farmers store manure in a lagoon until it can be applied as fertilizer. Anaerobic digesters have become more popular recently but are still uncommon.

Digesters require a substantial initial investment that may not pay off for several years, said Kenn Buelow, manager and co-owner of the 8,000-cow Holsum Dairies in Calumet County. He has two digesters that cost $2 million apiece and now pencil out — after a few years of tweaks.

Kenn Buelow, manager and co-owner of Holsum Dairies — two 4,000-cow dairies in northeastern Wisconsin — shows WisconsinWatch.org reporter Kate Golden one of the two manure digesters. Buelow originally built the digester to keep the smell down. Now it heats and powers his operation, and Holsum is selling energy back to the grid. But it took a while to get there, he says. Video by Kate Golden.

Manure-powered: A tour of Holsum Dairies’ digester from WisconsinWatch on Vimeo.