In April, Renee Simpson told a state legislative committee about her father, who was diagnosed last fall with mesothelioma, a virulent form of cancer associated with asbestos. While he was too weak to travel, she said, he considered the legislation she had come to testify against “unconscionable.”

SB 13 and its companion, AB 19, would impose additional reporting and procedural requirements on individuals suing companies over asbestos, a fiber once used widely in insulation and building materials. Their cases could not go to trial until they filed any possible claims against the various personal injury trusts established by now-defunct asbestos manufacturers.

Proponents of the bills, sponsored by state Rep. Andre Jacque, R- De Pere, and Sen. Glenn Grothman, R-West Bend, say the change is needed to prevent plaintiffs from “double-dipping” — seeking additional money from the trusts after getting everything they can from existing manufacturers. Their evidence of this occurring in Wisconsin is scant.

Opponents say asbestos lawsuits in Wisconsin are already tough enough. Only nine such suits were filed last year, in a state which annually has about 80 asbestos-related deaths, according to the Centers for Disease Control and Prevention.

The bills are opposed by veterans groups including Veterans of Foreign Wars Wisconsin, of which Simpson is state commander. She says 30 percent of mesothelioma cases involve veterans, who make up just 8 percent of the population. 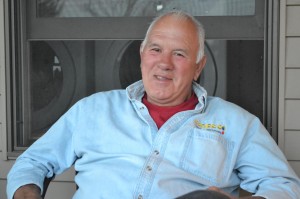 Dennis Lockington died of mesothelioma within a year of his diagnosis. Photo courtesy Renee Simpson.

Simpson’s father, Dennis Lockington, was exposed to asbestos during his military service, in barracks and on naval ships, and afterward, when he worked at several foundries. Simpson herself encountered asbestos while serving as an Army medic in Bosnia.

The bills, part of an array of “tort reform” legislation sought by state Republicans, are among the session’s hottest issues, generating nearly 1,100 hours of reported lobbying in just the first half of 2013. About half was by industry proponents and half by foes including the Wisconsin Association for Justice, representing trial lawyers, and the Wisconsin Asbestos Victims Network, a new state nonprofit.

Assembly and Senate committees have both recommended passage on party-line votes, with Republicans in favor and Democrats against. The bills could be voted on this month.

Trevor Will, a Milwaukee attorney who testified in favor of the bills on behalf of the Wisconsin Civil Justice Council, a coalition of business interests, denies that they create unfair burdens. He says plaintiffs just have to do what they’re already doing, only earlier, to prevent abuse.

But Nancy Rottier, legislative liaison for the state court system, says the legislation as written would require statements on potential trust claims in all personal injury lawsuits. In 2012, there were 6,350 such actions filed in state court.

This would mean, for example, that you couldn’t sue your neighbor for accidentally blowing up your house without filing a separate document stating that your neighbor has not created a trust for such purposes. Will dismisses objections to this new requirement, calling this filing “hardly a monumental burden.”

The bills could also make plaintiffs file all possible trust claims, whether they want to or not. Jill Rakauski, an attorney who represents asbestos victims, says the payouts for some trusts are lower than the nonrefundable $100 filing fee. Will is open to letting plaintiffs forgo pursuing claims when this does not make sense. But the current bill contains no such exception.

Dennis Lockington died in May, at age 68. Simpson says he was able to initiate legal action against the foundries where he worked before his death.

“You kind of suffocate,” Simpson says through tears. “He couldn’t breathe very well and the medications they gave him made him very sick. He couldn’t eat. It was pretty hard to watch.”

She doesn’t understand why some lawmakers think people like her father are out to cheat the system.

“We don’t feel that veterans, or anybody with mesothelioma, should have any additional hurdles,” she says.