Three weeks after the launch of federal health care exchanges, just one of the six organizations selected to receive a total of $1 million in federal funds to help Wisconsinites enroll is up and running.

J.P. Wieske, spokesman for the state Office of the Commissioner of Insurance, blamed the delay on the federal government. 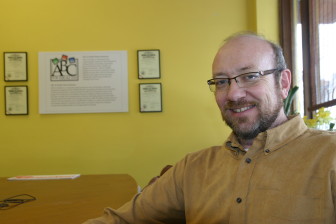 Bobby Peterson, ABC for Health: "We know that there are folks out there who are having difficulty enrolling." Courtesy of James Edward Mills

“Functionally, when you don’t get a grant until Aug. 15 and you’re supposed to start Oct. 1, you’re going to have problems,” Wieske said.

Others say rules put in place by OCI have made it harder for grant recipients to provide the contracted assistance.

“There’s a fair amount of blame to go around,” said Bobby Peterson, executive director of ABC for Health, a Madison-based public interest law firm. He cited federal delays in getting the program started, followed by additional “hoops and hurdles” for would-be navigators imposed by the state.

OCI is requiring that all navigators go through 16 hours of training, pass a written examination and a background check, submit to fingerprinting and pay fees. And the organizations they work for must register with the state and secure a $100,000 bond or equivalent proof of liability coverage for navigator misconduct.

Wieske said the state needs to protect vulnerable consumers from people who might take advantage of them. But Peterson said the federal government already established strict standards for the agencies receiving navigator funding.

“There’s two sets of regulatory hoops that you need to go through,” Peterson said. As a result, some navigators are not available even though they are badly needed: “We know that there are folks out there who are having difficulty enrolling.”

Wisconsin opted to use the federal health care exchange marketplace instead of creating its own under the Affordable Care Act. To facilitate this process, the federal Centers for Medicare and Medicaid Services (CMS) agreed to provide slightly more than $1 million to six groups to serve Wisconsin residents.

These grants are among the $67 million in Navigator Cooperative Agreements that CMS awarded to 105 entities in 34 states. Their role is to provide education and outreach, help establish eligibility and enroll individuals in the exchanges.

Navigators are not the only people empowered to help citizens enroll. Certified application counselors, who are not federally funded, can also provide enrollment services. They also must attend OCI training and take an examination.

CMS spokesman Richard Olague would not say how usual it is that Wisconsin’s navigator grant recipients are not up and running. But Wisconsin’s problems getting navigators in place do not appear to be universal.

In Illinois, according to a news report published this week, “hundreds” of navigators are now helping people sign up on the new exchanges. Other articles mention navigators on the job in Florida, Arizona and Wyoming.

The exchanges opened Oct. 1 and residents have until March 31 before open enrollment ends for 2014. But those without insurance are on a tighter timeline: They must enroll by Dec. 15 to get coverage by Jan. 1, or pay a fee — a portion of their income — for not being insured.

Representatives of the state navigator groups cited a short timeline and complex system for the delay.

“It’s a lot of work, especially at beginning, to get people hired and trained and on the field,” said Lucio Fuentez, executive director of Partners for Community Development, which got a $315,720 grant to reach Hispanic and Hmong residents in several Wisconsin counties.

Northwest Wisconsin Concentrated Employment Program, awarded $285,035 to provide outreach at sites including jobs centers, libraries and college campuses, became operational this week. Brad Gingras, the group’s chief operating officer, said his group had difficulty getting the $100,000 bond, which it originally did not realize it needed.

Gingras acknowledged that the lack of trained navigators during the first three weeks of the exchanges means that some people’s needs have not been met.

Legal Action of Wisconsin, which received $70,000 to enroll people aged 60 to 64, still has not received state approval. But Matthew Hayes, director of the group’s SeniorLAW project, said he expected to be up and running within a week.

“We will have plenty of time in November and the first half of December to get people signed up,” Hayes said. He added the organization has already been doing what it can to assist people, providing basic information and setting up appointments.

JoAnn Smith of the National Healthy Start Association, which was awarded more than $191,600 to reach out to uninsured Wisconsin residents, declined multiple requests to comment on its progress. The National Council on Urban Indian Health, which will get $35,000 specifically to work with Wisconsin Indian health programs, did not return calls for comment. Both groups are based in Washington, D.C.

CMS also awarded $104,520 to R&B Solutions, an Illinois-based company that works with Kenosha-area hospitals, to “connect uninsured and underinsured individuals with coverage options.” The company filed for bankruptcy last year and is now in the process of reorganization.

Dennis Brebner, president of R&B Solutions, said his company has trained more than a dozen navigators and is now just waiting for final approval from OCI.

“We’re ready to go once we get the final piece in place,” he said.

Olague of CMS said R&B Solutions “is a grantee in good standing,” taking part in progress calls and working to get state certification.