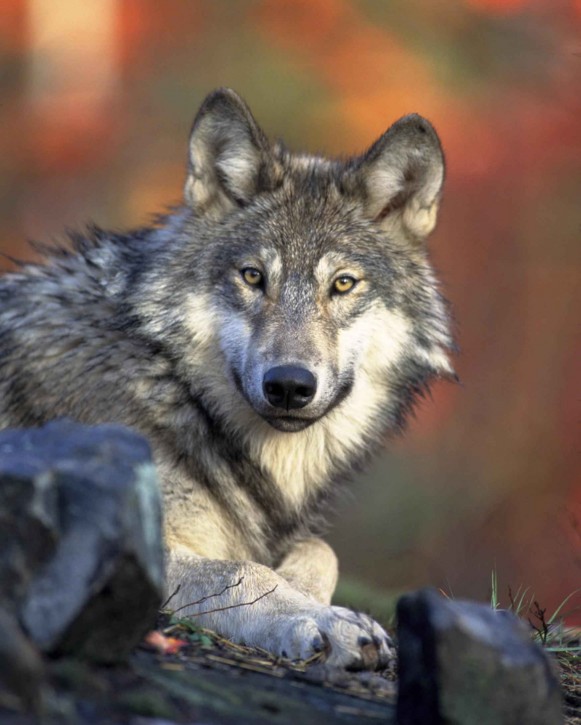 The state Department of Natural Resources estimates there are at least 800 wolves in the state. Some members of an advisory committee want to reduce the population to 350. 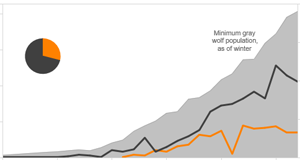 Each year the U.S. Department of Agriculture gets more than 100 complaints about problem wolves damaging livestock and property, harming dogs or endangering people. The Center found that in nearly 30 percent of the reports, wolves aren’t to blame. Explore the data in our interactive visualization, below.

As hunters prepare for Wisconsin’s wolf hunt, some scientists are warning that a proposal to sharply cull the population could destabilize it — just two years after wolves were removed from the federal endangered list.

At issue is a plan, favored by some members of a reconstituted state Department of Natural Resources committee, to maintain a population goal of 350 wolves.

The proposal runs counter to a widely accepted scientific model for harvest management, which suggests 350 is too low to reliably manage the wolf population.

Currently, the DNR estimates the state has at least 800 wolves. The 2013 wolf hunt season, which calls for harvesting 275 wolves, begins Tuesday. The DNR wants to reduce the population by about 13 percent to move closer to its goal.

“My opinion is the 350 number is the one people who simply don’t like wolves have seized upon,” said Timothy Van Deelen, a wildlife ecologist and associate professor at the University of Wisconsin-Madison, who is not on the committee. “You have a lot of the stakeholders who don’t know the science or feel any obligation to the science.”

The wolf committee is one of 16 wildlife advisory committees that were revamped this spring to exclude university researchers and reduce DNR staff — a move that internal DNR records show was controversial among some of the agency’s scientists.

The committees now have more representation by interest groups, including sportsmen.

The wolf committee is drafting a long-term plan for managing the animals due in June to the Natural Resources Board, which sets policy for the DNR.

Committee facilitator Bill Vander Zouwen, the DNR’s ecology section chief, said agency administrators are feeling pressure from outside groups not to raise the goal from 350, set in a state wolf management plan from 1999 when wolves were recovering from threatened status.

“Whoever worked with the legislators on the bill — it’s clear the legislators wanted (the wolf population) brought down,” he said. “If we start talking about higher goals, it will make people nervous because of the political pressure out there.”

Vander Zouwen said he didn’t know who was applying this pressure: “Nobody has really told me who those influential parties are.”

Several hunting groups have lobbied on the wolf hunt and contributed to GOP campaigns.

Proponents of reducing the population to 350 say this would decrease depredations — wolves killing or harassing livestock, deer, hounds and occasionally pets.

Eric Koens, who represents the Wisconsin Cattlemen’s Association on the advisory committee, said 350 is the maximum number his group would support because depredation complaints started taking off after the wolf population reached 250 in the state in 2001.

“There’s probably a place for some wolves, but they should be in the forested areas and not around farms and livestock operations,” Koens said. “They not only kill livestock but they cause other trauma to the rest of the herd.”

Committee member Maynard Breunig, representing the Wisconsin Trappers’ Association, was also adamant about not going above 350. 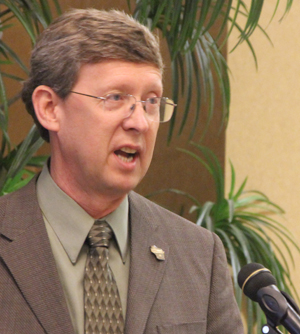 Some say goal not scientific

According to sustained yield theory, a prominent approach for managing wild animals, a species should be managed at no less than half of its habitat’s total carrying capacity, to ensure long-term stability. Above that level, a population can naturally rebound from environmental variations and harvest seasons, the theory goes.

Van Deelen estimated the carrying capacity for wolves in Wisconsin to be about 900. At 350 wolves, he told the advisory committee at its July meeting in Wausau, small mistakes in management are no longer self-correcting; they could lead to instability.

“If you’re dealing with a system you don’t have complete control over and complete knowledge of,” Van Deelen said, “the risk is you make mistakes that would overharvest and could eventually walk the population back to extinction.”

Van Deelen is working with a doctoral student, Jennifer Stenglein, who he said has developed a more nuanced model that represents the population even better.

Stenglein said her model also shows a wolf population of 350 may be too low to sustain.

“It’s very hard to keep the population at 350,” she said. “I don’t think they would immediately go extinct, but it’s definitely not a stable number.”

Vander Zouwen, facilitator of the wolf advisory committee, said the DNR wants a sustainable number and that 350 would be in a range of sustainable population goals. “The population when it was below 350 just steadily increased,” he said.

“If you’re dealing with a system you don’t have complete control over and complete knowledge of, the risk is you make mistakes that would overharvest and could eventually walk the population back to extinction.”

But he said it is too early to tell what the goal will be, and he urged committee members to keep open minds.

“I’ve been telling everybody not to jump to conclusions yet,” Vander Zouwen said. “We have a lot of homework to do before we get to that point.”

Not listening to science?

Gray wolves, who have lived in Wisconsin since the glaciers retreated about 10,000 years ago, were driven to extinction in the state in 1960 after a century of elimination efforts. They began to make a comeback along the Minnesota border in 1975.

In 1989, the Wisconsin DNR launched a plan to recover the species. The species was reclassified on the state level from “threatened” to “protected wild animal” in 2004 when the population passed 350. In January 2012, wolves were removed from a federal list of endangered species, which prompted state legislators to mandate a yearly harvest of wolves.

Gov. Scott Walker signed the bill into law in April 2012. At the time, he said the wolf population had “created a hardship for many farmers and homeowners.”

The state’s 2012 wolf hunt, the first in half a century, was approved with support from several state sportsmen groups, including the Safari Club International Wisconsin Chapter, Wisconsin Bear Hunters Association and Wisconsin Bowhunters Association, all of whom are now represented on the Wolf Advisory Committee.

Officers and board members of the seven groups that spent time lobbying for the wolf hunt have donated at least $15,500 to Republican campaigns since mid-2008, an analysis shows. Recipients include Walker and former state Rep. Scott Gunderson, now DNR executive assistant. They also gave at least $4,300 to Democratic campaigns.

The rechartering of DNR’s 16 wildlife committees has raised concerns among some DNR panel members, according to emails and a report obtained under an open records request by the Wisconsin Center for Investigative Journalism.

“(T)his is not a great way to integrate science into committee work which should be the foundation of recommendations or at the very least used to inform decision-making,” DNR wildlife and forestry section chief Karl Martin wrote in a March 26 email to Vander Zouwen.

“If our ‘partner groups’ are allowed a seat at the table on our species committees, why is it that our University partners are not allowed a seat?” Anderson wrote a DNR wildlife supervisor on March 18. “They are just as important, if not more so. They provide the science behind the decisions we make to protect, preserve and restore the natural resource of this state for its citizens.”

In an internal July report on the “new advisory committee protocol implementation,” committee member and DNR carnivore specialist Dave MacFarland noted, “From my perspective, the meetings seem to be dominated by external partners. Staff seem reluctant to speak or to challenge statements from external partners.”

During Wisconsin’s 2012 wolf harvest, hunters and trappers killed 117 wolves but made little impact on the total population. The DNR set this year’s quota at 275, of which 24 are reserved for Indian tribes and will not likely be hunted because they consider the animal sacred.

“Our intent at this point is to put downward pressure on the wolf population,” Vander Zouwen said.

That approach is contrary to what neighboring states are doing.

Minnesota’s management plan says wolves “will continue to be allowed to naturally expand their range in the state.” With the current population estimated at 2,200, the plan sets a minimum threshold of 1,600 wolves, at which point the DNR would manage the population to recovery.

Last year, Minnesota allotted about 400 wolves for harvest. After a survey last year showed a declining population, state officials cut that quota nearly in half for 2013.

Michigan is treading even more lightly. The state will have its first harvest this year, limited to 43 wolves to reduce depredations in three targeted areas. The state’s wolf population is estimated at 658.

Stenglein said her modeling has shown that the wolf populations in these neighboring states could continue to replenish the Wisconsin population if they continue to have lighter harvests.

“Then Wisconsin becomes kind of a sink for wolves and they continue to pour in,” Stenglein said. “I guess the good to that is there will be a buffer, but the sad side to that is, do you really want to go there?” Learn About Tableau
The nonprofit Wisconsin Center for Investigative Journalism (www.WisconsinWatch.org) collaborates with Wisconsin Public Radio, Wisconsin Public Television, other news media and the UW-Madison School of Journalism and Mass Communication. All works created, published, posted or disseminated by the Center do not necessarily reflect the views or opinions of UW-Madison or any of its affiliates.