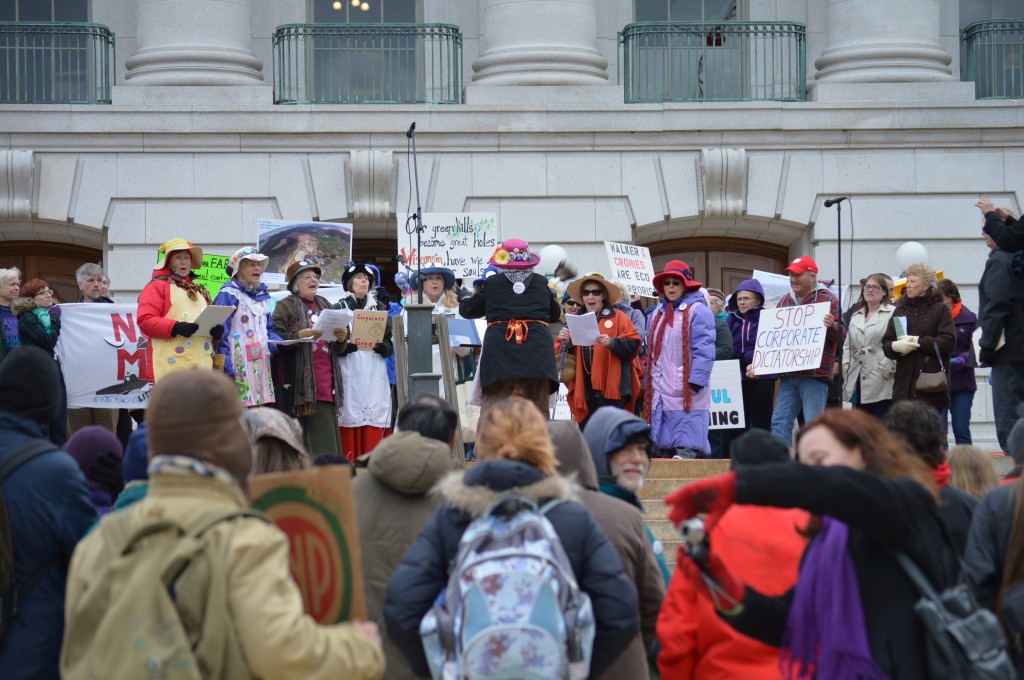 About 125 opponents of the bill rallied outside the Capitol at noon. Some of the speakers were from west-central Wisconsin, where most of the frac sand mining is taking place.

The impact of a controversial bill that would restrict local government regulation of frac sand mines might be broader than originally thought, affecting the proposed iron ore mine in northern Wisconsin and factory farms across the state, opponents said Thursday at a Capitol hearing.

But while about 125 opponents of the bill rallied outside the Capitol, backers insisted that the bill is needed to streamline regulations for frac sand mining companies.

Patchwork regulation of nonmetallic mining “is beginning to have spillover effects into other parts of the economy,” Tiffany, chairman of the Senate Committee on Workforce Development, Forestry, Mining, and Revenue, said at the hearing. 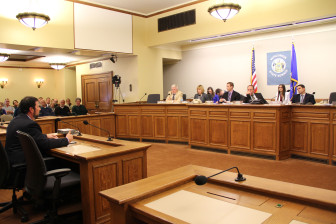 Rich Budinger, president of the Wisconsin Industrial Sand Association, testified that the proposed legislation would create “regulatory certainty” for industry.

Tiffany added that varied regulations could have a “chilling effect” on commerce. However, he did not return messages seeking response to opponents’ concerns about the bill’s potential impact on the proposed iron ore mine and on factory farms.

Senate Bill 349 would limit the ability of local governments to regulate air and water quality, use of explosives and highway use contracts. It would also prohibit the state Department of Natural Resources from establishing nonmetallic mining reclamation standards related to water quality or quantity and air quality that are more restrictive than existing state laws.

Testimony at Thursday’s hearing suggested that the bill could have impacts beyond just frac sand mining. The state’s sand is in demand for use in the process of hydraulic fracturing, or fracking.

Amber Meyer Smith, director of programs and government relations with Clean Wisconsin, a nonprofit environmental group, said the bill could also prevent communities around the proposed open pit taconite mine in the Penokee Range from controlling activities such as blasting.

Smith said Tiffany introduced the bill shortly after Ashland County officials indicated they were considering an ordinance that would restrict the use of explosives. The county is considering such regulation because of the recent discovery of asbestos minerals at the Gogebic Taconite, or GTAC, mine site.

According to an evaluation of the proposed bill released on Wednesday by the nonpartisan Wisconsin Legislative Council, the bill would prohibit cities, villages, towns, and counties from regulating the use of explosives in connection with mining, quarrying, and related activities. However, those municipalities would be allowed, according to the report, to regulate blasting schedules by issuing a conditional use permit.

“It is hard not to see this provision as just another way to ease any restrictions that GTAC might have to take in building this mine,” Smith said.

Smith added that broader provisions in the proposed bill would also restrict local regulation of air and water quality. She said, for example, that more than 200 communities regulate outdoor wood boilers because of air pollution and added that Tiffany’s bill could affect such efforts.

State Sen. Bob Jauch, D-Poplar, also said he was concerned about potential impacts on communities around the proposed Gogebic mine. Many of his questions at the hearing also centered on local governments’ ability to protect their citizens’ health, safety and welfare and concerns that agreements already in place would be overridden if the legislation passed.

The nonprofit League of Conservation Voters charged that the bill would block important local efforts to limit pollution from factory farms and others. For example, the group said, the town of Rosendale prohibited aerial spraying of manure in response to concerns about exposure to viral and bacterial pathogens. And Kewaunee County is considering expanded testing of groundwater because many wells have unsafe levels of nitrates and bacteria.

Outside the Capitol, protesters derided the bill.

“This is an assault on local control,” said Mike McCabe, executive director of the Wisconsin Democracy Campaign, a nonpartisan watchdog group, who spoke at the protest. “It’s a state power grab.”

More than 30 groups sponsored the rally, according to a release from the group Madison Action for Mining Alternatives. A bus from Menomonie was scheduled to leave at 6 a.m. Thursday to bring people to the protest and hearing.

“People in my district are saying, ‘Let us have some say in what happens in our neighborhood,’ ” she said. “But this bill does just the opposite.”

Speaking in favor of the bill, Rich Budinger, president of the Wisconsin Industrial Sand Association, talked about a local ordinance that would have forced a sand mine to shut down within 60 days.

“The bill before committee creates regulatory certainty,” he said.

The bill also received the support of Wisconsin Manufacturers & Commerce, the state’s most powerful business lobby.

The Milwaukee Journal Sentinel reported Tuesday that the Assembly plans to wait until spring 2014 to take up the bill. The Senate committee did not plan to vote on the bill on Thursday.