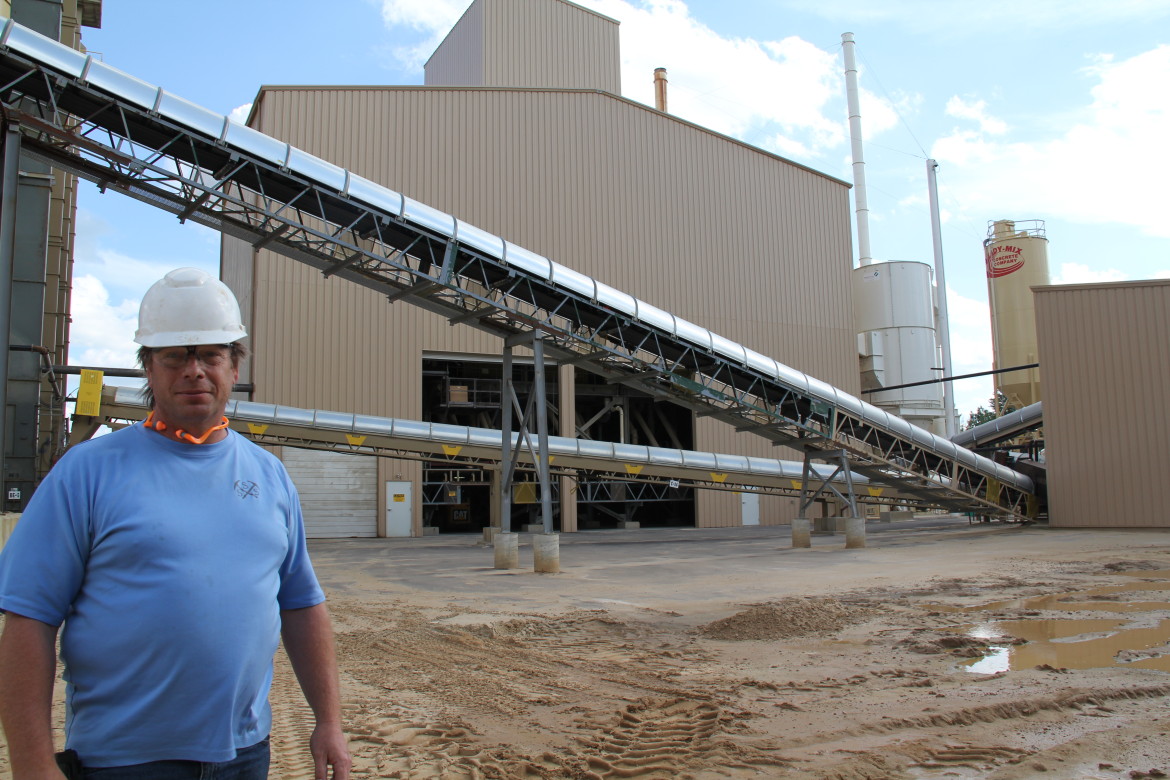 Environmental Health and Safety Manager Duane Wilke said he has a vested interest in making sure the Superior Silica sand processing plant in New Auburn keeps the dust down: his 15-year-old daughter. “I would never do anything to harm the air quality, to harm my own daughter,” he said.

NEW AUBURN — Frances Sayles is cleaning her counters and vacuuming her home more often in an attempt to keep a never-ending stream of sand at bay. But it is not just the cleaning that concerns her. She also worries about her health.

“It bothers me because I have asthma and I have trouble breathing at night, especially,” said Sayles, a retired certified nursing assistant. “I’m a very healthy person other than that.” 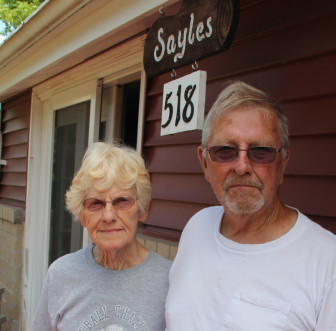 Sayles lives with her husband, Dean, in the village of New Auburn. There are two frac sand processing plants on the edges of the village, which straddles Barron and Chippewa counties.

The state has at least 115 permitted or operational frac sand mines and processing plants, according to a tally by the Wisconsin Center for Investigative Journalism. The state’s sand is in demand for use in the process of hydraulic fracturing, or fracking.

Like some other west-central Wisconsin residents, the Sayles are frustrated with the state Department of Natural Resources’ lack of a comprehensive approach to addressing concerns surrounding potential health problems from crystalline silica dust.

Tegan Wendland reports for Wisconsin Public Radio that in light of growing citizen concern, State Senator Kathleen Vinehout and State Representative Chris Danou are working on legislation this session to increase funding and staffing for the DNR. 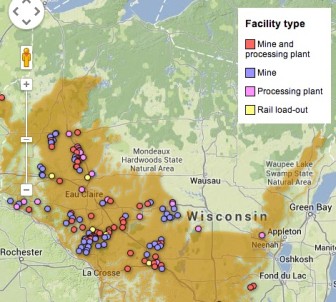 In New Auburn, the village’s preschool through grade-12 school recently upgraded its air filters as a precautionary measure after residents expressed concern about fine crystalline silica dust, which is known to cause serious health problems in workers.

“As far as our health’s concerned and anything else, we don’t know what’s going on,” Dean Sayles said. “And I think somewhere along the line that they’re going to have to tell us what’s going on, if this is really affecting us. The DNR ain’t helping us — that’s for sure.”

Trempealeau County, in western Wisconsin, recently voted to temporarily halt permitting of additional frac sand facilities so it could study potential health effects. A moratorium went into effect Aug. 30 in that county, which leads the state in the number of permitted and operating frac sand mines, processing plants and rail loading facilities.

The DNR and state Department of Health Services say they lack the resources to find definitive answers. They also argue that current efforts to control dust are sufficient. 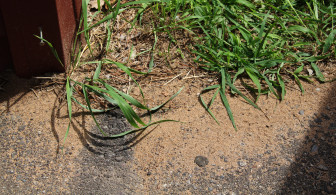 The Sayles say they sweep their driveway, shown here, and wipe their cars down daily because of all the sand and dust from neighboring sand facilities.

“Unfortunately, resources aren’t there to do large-scale studies,” said Jeff Johnson, an environmental engineering supervisor for the DNR.

In August 2011, the DNR surveyed existing research and other states’ actions to mitigate health effects of crystalline silica exposure. The agency concluded that more research was needed.

Since then, Johnson said, he is unaware of any comprehensive Wisconsin study on exposure to respirable crystalline silica.

DHS rejected two legislators’ request for such a study in 2011. A letter from then-state Health Secretary Dennis Smith noted that although there was evidence of health effects from long-term occupational exposure, his agency found “no published evidence” of health effects from “occasional off-site” exposures to people living near sand mining operations.

Some industry officials question the outcry over potential health effects.

Rich Budinger, president of the Wisconsin Industrial Sand Association, said companies should answer “genuine” questions, but added that “some people are anti-mining and creating a disingenuous scenario of panic and fear.”

But for many, the issue has not been resolved.

Decades of research in worker populations has proven the serious health hazards of inhaling fine crystalline silica particles in high levels over long periods of time. Little is known, however, about whether surrounding communities are exposed to disease-causing levels.

“I think it’s important for us to understand exposure,” said Dr. Matthew Keifer, a physician of  occupational medicine at Marshfield Clinic. “That is really the most important thing to me because if it’s not a concern, we can put people’s minds at rest.”

The National Institute for Occupational Safety and Health notes that occupational exposure to respirable crystalline silica is linked to silicosis — an incurable lung disease — in addition to lung cancer, pulmonary tuberculosis and airway diseases. Workers in such industries as construction, sandblasting, mining and glass manufacturing are at risk of exposure.

At the end of August, the federal Occupational Safety and Health Administration proposed lowering the exposure limit for crystalline silica in the workplace to prevent silicosis. 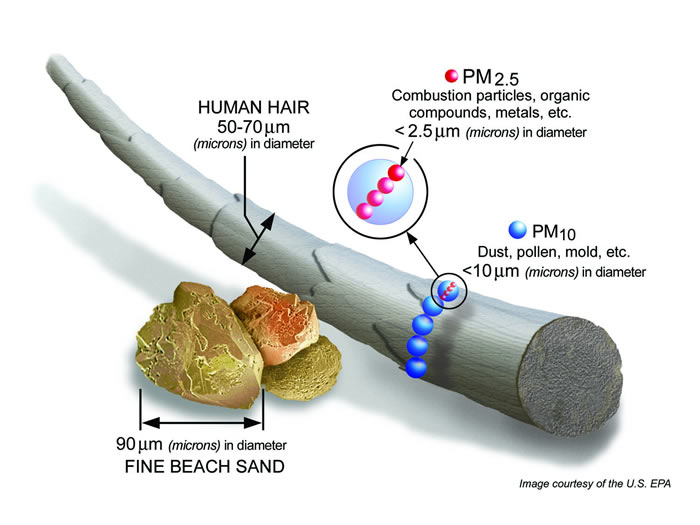 And while studies in workers do not necessarily predict effects on the broader population, the neighboring state of Minnesota used those data to set a guideline for respirable crystalline silica exposure outside the workplace to protect human health.

Using occupational studies to help set exposure guidelines for the general population is not unusual, according to James Kelly, a manager in the Minnesota Department of Health’s Environmental Health Division, who supervises the group that developed the state’s guideline.

Minnesota’s Department of Health established a guideline in July 2013 that recommends exposure no higher than 3 micrograms per cubic meter of particulates 4 micrometers in diameter or less, so-called PM4, the size that worries health experts. The average human hair is between 50 and 70 micrometers in diameter.

In September, the National Institutes of Health approved a grant that would provide almost $125,000 for the University of Iowa to study the impact of mines on respirable crystalline silica levels in nearby communities and report those findings to the public.

In Wisconsin, EOG Resources, a Texas-based company, is monitoring air emissions for crystalline silica at PM4. Preliminary data from its four facilities in Chippewa and Barron counties show much lower concentrations than the Minnesota guideline recommends, according to preliminary results released by the DNR.

Data from the first two quarters show most of the samples were below the minimum limit the study could analyze, or 0.3 micrograms per cubic meter of air. The samples were also within the average background levels that can be found in the environment throughout the nation, according to the study.

The DNR’s Johnson said the EOG study helps “fill a gap” the agency identified in its August 2011 study.

“There is not a lot of information of off-site impacts of crystalline silica, specifically,” Johnson said.

Keifer said he does not know whether the level of exposure in surrounding communities would be high enough to induce health effects.

Clockwise from left: Piles of sand wait to be washed and sorted by size at Superior Silica in New Auburn; grades of sand on display at the plant; dust filters used in an elaborate filtration system to keep air emissions down.

Some frac sand mining critics question whether the DNR’s regulations and enforcement are enough to protect public health.

Budinger, president of the state’s sand mining industry association, said if there is a problem, it is not due to a lack of regulation but of enforcement: “The industry is under strict regulations and has been for many decades.”

At a conference of the Society for Mining, Metallurgy & Exploration in the Twin Cities in mid-September, those working with and in the frac sand mining industry expressed similar sentiments. 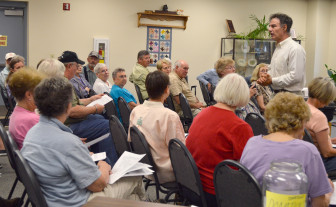 The DNR currently requires only facilities that produce more than 2,000 tons per month on a rolling 12-month average to install ambient air monitors. However, the DNR can exempt facilities from this requirement if certain conditions are met.

The DNR oversees 13 industrial monitors that collect particles 10 micrometers in diameter or less, so-called PM10, at sand mines and processing plants. The monitors show that all of the facilities’ emissions are well below the Environmental Protection Agency’s particulate concentration standards, Johnson said.

But health experts are concerned about smaller particles that are not specifically monitored in the ambient air outside frac sand facilities. Monitors measure only total particulates in the air, not specifically crystalline silica.

“The DNR is not looking at these fine particles, they’re not requiring industry to measure these fine particles,” said Crispin Pierce, an associate professor in the Environmental Public Health program at the University of Wisconsin-Eau Claire. “But we believe it is a concern and our initial results suggest that there are times when the levels are above EPA standards.”

Many concerned about potential health effects cite Pierce’s work as evidence that understanding exposure is a pressing issue. In response, Budinger and others question the validity of Pierce’s findings.

UW-Eau Claire professor Kent Syverson, who has worked as a consultant for the frac sand industry, said Pierce’s research “does not produce meaningful quantitative data.”

Marty Sellers, an air management engineer with DNR, said he inspects primarily larger, industrial mines because that is what regulations are geared toward.

The DNR requested and was granted funding for two new positions as part of the 2013-15 state budget, though it said it could use as many as 10. Those additions will allow the agency to expand its compliance efforts to smaller facilities that currently receive less frequent inspections, said Johnson, who will be leading part of the team.

State Sen. Kathleen Vinehout, D-Alma, who has introduced bills with additional requirements relating to frac sand facilities, believes the DNR should have an additional 32 positions, given the number of existing and proposed facilities.

“I think part of the problem we see right now is that the existing state regulations that should apply to sand mines are being very poorly enforced,” said Vinehout, whose district includes dozens of frac sand facilities. 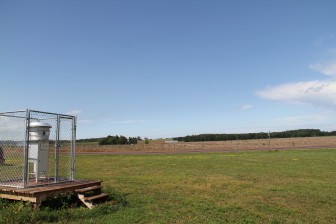 An air monitor stands among cornfields on the outskirts of New Auburn, which has two frac sand processing plants on its edges.

In November 2011, a group of 10 citizens, including Pierce from UW-Eau Claire, submitted a petition to the DNR requesting that, among other things, the agency list respirable crystalline silica as a hazardous air pollutant.

Scott McCurdy, director of environmental groups with Cedar Corporation, a consulting firm in Menomonie, wrote about his concerns for his family.

“I have a son, a daughter-in-law and three grandchildren that live two miles from the mines up in Cooks Valley, so I have a concern that I think is important that industry needs to address,” he said in an interview, but added that he does not take sides on the issue.

In a Jan. 30, 2012, letter from Deputy Secretary Matt Moroney, the DNR denied the petition. The agency cited the Air Management Program’s lack of authority and the agency’s belief that current regulations were sufficient to protect public health.

Two years after the initial requests, there are still no conclusive answers to the questions weighing on residents’ minds. And for now, back in New Auburn, the Sayles are still waiting.

“I don’t know what to do,” Frances Sayles said. “Just live with it, I guess.”