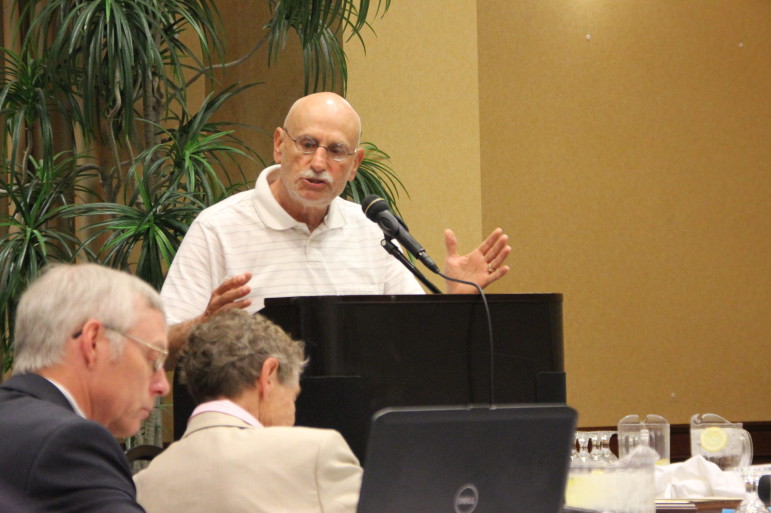 Howard Goldman, representing the Humane Society of the United States, said the hunting quota was set too high. The organization was not allowed on the wolf advisory committee this year. Rory Linnane/Wisconsin Center for Investigative Journalism

As hunters prepare for Wisconsin’s wolf hunt, some scientists are warning that a proposal to sharply cull the population could destabilize it — just two years after wolves were removed from the federal endangered list. Oct. 13, 2013

The state Department of Natural Resources has 16 committees that advise it on wildlife management decisions. In March, the department restructured the membership of these committees, reducing DNR staff, removing university researchers and adding more representatives from external interest groups.

The Wolf Advisory Committee was the first to be rechartered. It now includes 12 DNR employees, three representatives from federal agencies, a tribal representative, and nine other DNR-appointed “stakeholders.”

The invited stakeholders mostly represent hunting and trapping interests. Some organizations that call for a lighter hunt, including the Sierra Club-John Muir Chapter, and the Humane Society of the United States, were denied spots on the committee. Both had been represented on a previous DNR wolf committee.

“It’s taken 38 years for wolves to recover in Wisconsin,” said Howard Goldman, of the Humane Society of the United States. “We must be very conservative in our management approach. Too much is at stake to do anything else.”

Dave MacFarland, a DNR carnivore specialist on the wolf advisory committee, said groups opposed to wolf hunting were excluded because the “harvest is required by state law.”

Randy Jurewicz, representing the Timber Wolf Alliance on the advisory committee, said his is the only “pro-wolf” group to get representation because of its reputation for providing reliable information, not advocacy.

“That is not lost on me,” said Jurewicz, who helped draft the state’s current wolf management plan. “There’s a sensitivity that we were invited there, so as an invited guest, I try to be polite.”

Jurewicz admits he does not always speak his mind, to protect his spot. For instance, although he said in an interview that he opposed this year’s hunt quota, he did not speak up when the committee facilitator asked if everyone could “live with” a quota of 275.

“I may have made a mistake by not saying no at that point, but given the circumstances … it seemed like that was kind of a done deal and probably the best we could get,” Jurewicz said.

There is one representative in the group who is entirely opposed to the wolf hunt — Peter David, who represents tribal interests and whose spot is legally mandated. He thinks the stakeholders offer a skewed perspective of what the public wants.

“Once you get outside of the agency personnel, you’ve got seven groups that are related to hunting, trapping and livestock interests,” he said. “To me, that doesn’t reflect the public interest in general.”