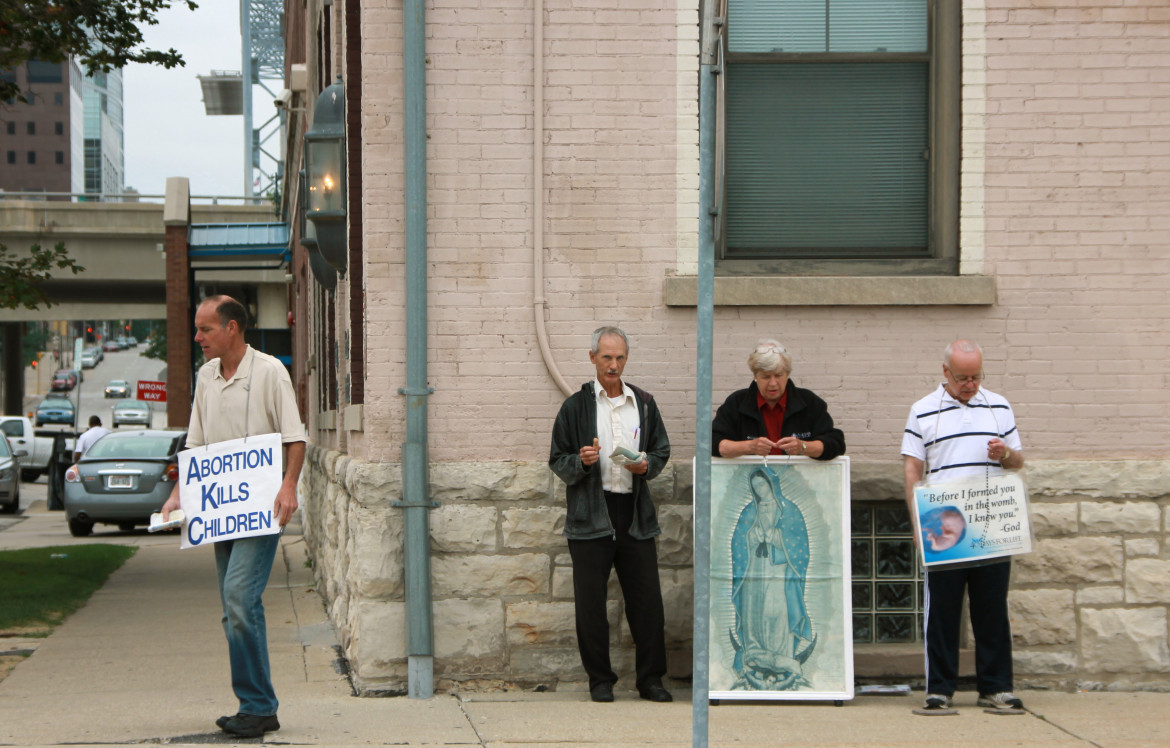 Protesters gather Aug. 28 outside the Planned Parenthood clinic in Milwaukee that provides abortions. The organization is suing the state to clarify a new law that puts additional restrictions on medication abortions.

Click the chart below to track abortions by Wisconsin women over the past decade.

Despite an overall decline in abortions by Wisconsin women in 2012, the number of surgical abortions rose by 8 percent last year — the first increase since the state started tracking abortion methods in 1998, records show.

Planned Parenthood officials say the rise in surgical abortions is a result of legal concerns over a state law that prompted them to stop providing medication-induced abortions for most of last year.

The medication option, which is less invasive and offers more privacy, has been increasingly chosen by women in the first nine weeks of pregnancy since it was approved for general use by the U.S. Food and Drug Administration in 2000.

“It’s an option that’s been available for women for the last decade in Wisconsin, and to have the main provider not be able to provide it anymore, it took that option away for them,” said Nicole Safar, public policy director for Planned Parenthood of Wisconsin.

“The government has made a choice for them and taken away a good, valid, safe health care option for no other reason but a political reason.”

Wisconsin Right to Life credits the new law with helping to drive down the number of abortions by 4.7 percent statewide in 2012.

“Whenever babies aren’t being destroyed, whether through chemical or surgical abortions, we think that’s great,” said Susan Armacost, legislative director for Wisconsin Right to Life. “We’re looking at the numbers across the board. There were 322 fewer abortions in 2012, so 322 babies whose lives were spared.”

Act 217 was billed as a way to prevent doctors from prescribing abortion medication by webcam, as has happened in other states. But Planned Parenthood officials say they had no plans to use teleconferencing in medication abortions. And they allege the law’s requirements are too vague for doctors, who face the threat of criminal and civil penalties if they do not comply.

For example, the law requires a doctor to be physically present when abortion medication is given, but does not specify whether the doctor has to be with the patient when she takes the second pill, usually done in her own home. Because Wisconsin already has a 24-hour waiting period — and the two abortion pills must be given 24 hours apart — the law could mean women would be forced to make three trips to a clinic to obtain an abortion.

In June, Wisconsin Planned Parenthood clinics resumed offering medication abortions after a Dane County judge temporarily blocked the provision requiring that a doctor be present when the medications are given. The ruling came in a lawsuit filed by Planned Parenthood seeking clarification of the law.

That case remains open, and other parts of the law are still in effect. Under the new law, patients are required to see the same doctor for a counseling session on the first day and receive the abortion medication on the second day. Safar said this requirement has caused scheduling delays, but Planned Parenthood is not challenging this provision.

The only other abortion provider in Wisconsin, Affiliated Medical Services, halted nonsurgical abortions at its clinic in Milwaukee when the law took effect in April 2012, but resumed a month later after a legal review.

Women in Wisconsin and across the country have increasingly chosen the medication option for abortions since the pills were approved by the Food and Drug Administration in 2000.

In 2011, 45 percent of women eligible for medication abortions — generally those nine weeks pregnant or less — at Planned Parenthood clinics in Wisconsin chose that option, the organization said.

Surgical abortions by Wisconsin women rose to 5,734 in 2012, up from 5,299 the previous year, according to data released in August by the state Department of Health Services.

Last year, 6,692 Wisconsin women had abortions in the state. This was a drop of 327, or 4.7 percent. Total abortions performed in Wisconsin, including among women from out of state, dropped by 322, or 4.4 percent.

Providers say the number of abortions has been on a downward trend for years because of a decline in unintended pregnancy, attributable to improving sex education and access to birth control. Safar said the new restrictions have just created roadblocks that delay access to a legal medical procedure.

A decade of abortions in the state:

Hover over the lines to see exact values.
//ajax.googleapis.com/ajax/static/modules/gviz/1.0/chart.js