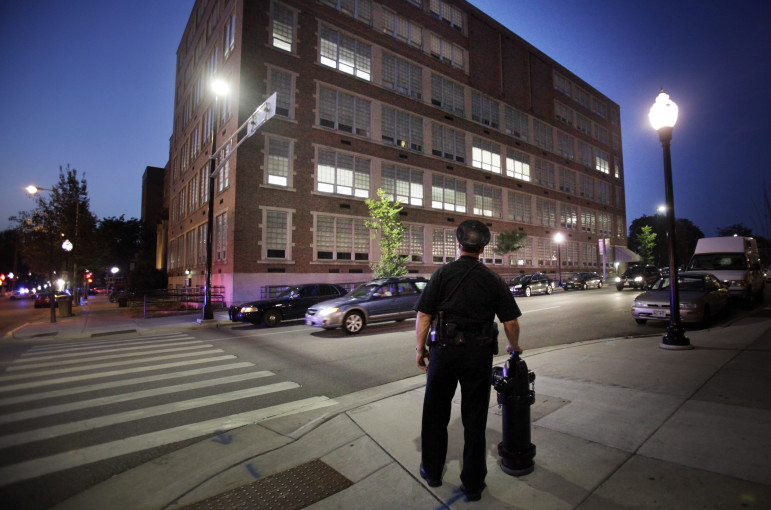 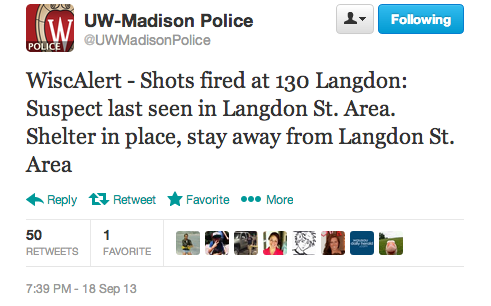 Most UW students do not get text alerts

An April report by the Wisconsin Center for Investigative Journalism showed most students at UW campuses had not signed up for text alerts.

Five minutes after Dane County’s 911 dispatch fielded a call about a shot fired on Langdon Street by the University of Wisconsin-Madison campus Wednesday, thousands of students received the same urgent message on their phones.

An armed suspect was heading west on Lakeshore Path in the direction of Lakeshore residence halls, and everyone in the area was to take shelter and stay put, the message from UW-Madison police said.

UW-Madison police credit the rapid communication with helping them quickly catch one of two suspects who had allegedly robbed a student at gunpoint, then fired. There were no reported injuries.

“That message in itself kept people indoors and that made it easier for our officers to find people who were outside and matched the suspect’s description,” police spokesman Marc Lovicott said.

Universities nationwide are increasingly turning to text alerts, as well as emails and social media, to provide instruction in emergency situations.

At UW-Madison, all campus students, faculty and staff get email WiscAlerts, and about 25 percent have opted in for text alerts. In the 24 hours following the emergency, 1,000 people signed up for texts.

Beginning in the fall of 2014, UW-Madison students will be required to sign up for text alerts during registration, though they can later opt out.

For those who didn’t get the texts Sept. 18, communication was spread in other ways, both old-fashioned and new.

One student outside Memorial Union Terrace, located on Lakeshore Path, stood up and read the message to the crowd, according to another student’s Tweet. A Tweeted photo showed the Terrace was promptly deserted.

“That’s great. That’s the point here,” Lovicott said of this communication. “WiscAlerts are a way for us to reach out to as many people on campus as possible. I know there are individuals on campus who are visitors, so we rely on the system to alert our community and we hope our community in turn alerts those around them.” 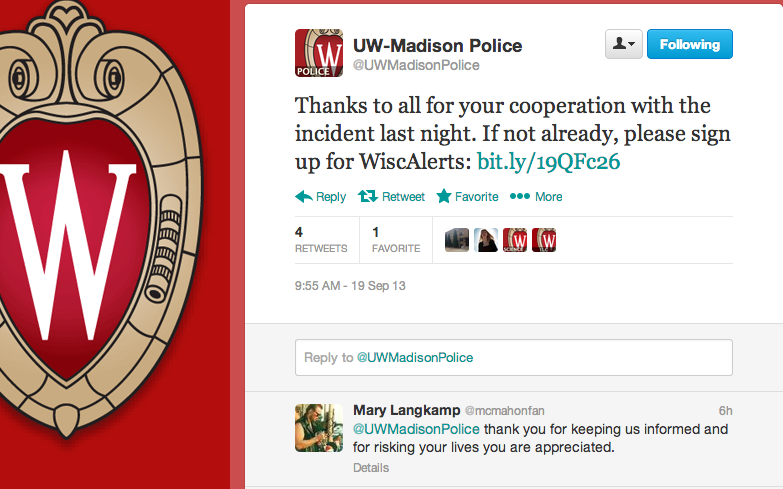 Lovicott said police sent out five alerts over a two-hour period, including a final all-clear message. The alerts reached 92,000 campus accounts, which included texts to 17,000 cell phones, and 75,000 emails.

Police also took to social media, posting updates to Facebook and Twitter where they interacted with other users worried about their safety. The UW-Madison police Twitter account has more than 4,775 followers, about 325 of whom started following since the emergency.

Lovicott said this allowed police to address misinformation and provide further instruction, and he urged other campuses to take advantage of the tool.

“We saw that with the Boston bombings — a lot of police information was shared on Twitter,” Lovicott said. “We’re entering a brave new world with social media. Folks are information hungry and they’re wanting to find this stuff out.”