Trout swim in a viewing pond at the Nevin Hatchery in Fitchburg near Madison, where some fish tested positive for cutthroat trout virus.

Tegan Wendland reports for Wisconsin Public Radio on how the DNR is viewing the virus as a biosecurity issue.

State natural resource officials are wondering how a mysterious virus found its way to Wisconsin trout and what it will mean for the health of aquatic life.

“It’s a big unknown,” said Susan Marcquenski, a fish health specialist for the state Department of Natural Resources. “There’s very little information about the effect of the virus on cool-water species.”

Despite the uncertainty, state authorities confirm that they released 270,000 brown trout this year from hatcheries where fish tested positive for the cutthroat trout virus. An additional 160,000 had already been released last year before officials got the test results. 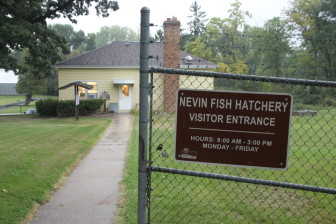 At the Nevin Hatchery in Fitchburg near Madison, thousands of trout were released into the wild before officials learned some of the fish had tested positive for cutthroat trout virus.

Raised in state hatcheries, the trout were meant to bolster the species’ population in local watersheds. They were the first fish known to be infected with the virus east of the Mississippi River, according to Marcquenski, though the virus may have previously gone undetected.

Because only samples of fish are tested, officials do not know how many of these fish were carrying the virus when released into the headwaters of the Mississippi and the Yahara river system.

Part of the rationale for releasing the infected fish was the benign history of the virus, which has been found in several western states. Though similar to the virus that causes Hepatitis E in humans, it has no known health impacts on the trout it inhabits, and likely cannot spread to mammals.

But little is known about the potential for the virus to spread to other cold-blooded animals that share a home with trout, such as pike, bass, other species of fish, and even amphibians.

Trout swim in a viewing pond at the Nevin Hatchery in Fitchburg near Madison, where some fish tested positive for cutthroat trout virus.

She and a professor at the University of Florida, Thomas Waltzek, are developing a proposal to study the effect of the virus on other fish species. Waltzek is also helping the DNR develop ways to track and remove cutthroat trout virus from fish eggs.

Wisconsin DNR officials first found the virus in November in lab results for brown trout at the St. Croix Falls Hatchery, analyzed by the U.S. Fish and Wildlife Service. The virus was also found at the Nevin Hatchery in Fitchburg near Madison and in trout from Lake Michigan. 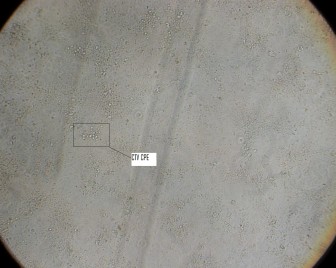 Biologists with the U.S. Fish and Wildlife Service captured this image identifying the cutthroat trout virus in fish cells.

“It’s quite a puzzle to us,” said Al Kaas, chief of DNR’s fisheries culture section. “We’ve been trying to figure out how our biosecurity measures broke down and allowed it to show up in three different locations in Wisconsin.”

The virus may have come to the state by people moving fish and fish eggs, or natural movement of fish and predators, Macquenski said. Sometimes birds pick up fish from neighboring waterways and drop them in the state’s exposed hatcheries.

Marcquenski said DNR officials, after consulting with the Wisconsin Department of Agriculture, Trade and Consumer Protection, as well as DNR’s Fish Management Board, released a group of trout likely carrying the virus.

“They chose not to take any regulatory action,” Marcquenski said. “So the fish were stocked in the watershed surrounding the St. Croix Falls Hatchery.” Kaas noted that none of the hatchery fish died or experienced adverse effects from the virus.

That watershed runs from the headwaters of the Mississippi River down to the Gulf of Mexico.

Jim Winton, a supervisory research microbiologist at the Western Fisheries Research Center in Seattle who specializes in fish viruses, said he was not seriously concerned about the DNR’s decision.

Although Winton said a precautionary principle is to not move fish that are carrying a virus, he noted that the virus may have already naturally migrated to the watershed.

“The fish either had it or acquired it from a local source,” Winton said. “If the virus was already in the watershed, it’s pretty hard to put that genie back in the bottle.”