Kim Simac, a Tea Party activist, says the Common Core standards are “spreading across the country without much input.” She hopes to pressure state lawmakers to halt their implementation.

Too easy or too tough?

Some critics of the new Common Core standards embraced by Wisconsin schools feel they set the bar for students too high too early. Others argue that the standards are too easy. Read more here.

Read some samples of the standards for various grade levels.

As Wisconsin schools begin a new year, many are tailoring their lessons around an increasingly controversial set of voluntary math and English standards for kindergarten through 12th grade.

The Common Core State Standards Initiative, which sets new and often more rigorous goals for nation’s students at each grade level, is drawing flak from all sides, from Tea Party activists to educators.

“It’s kind of a monstrosity that’s spreading across the country without much input from the town boards, school boards,” said Kim Simac of the Northwoods Patriots, a Tea Party affiliate in Eagle River.

Meanwhile, the Milwaukee-based nonprofit publisher Rethinking Schools has chided, “Unfortunately, there’s been too little honest conversation and too little democracy in the development of the Common Core.”

Meant to prepare students for colleges and careers, the Common Core standards list specific expectations for academic mastery. For instance, students should recognize equivalent fractions by fourth grade and use precise vocabulary when writing about complex topics in grades nine and 10.

The standards also call on teachers to help students develop critical thinking and analysis skills, said Emilie Amundson, Common Core State Standards team director for the state Department of Public Instruction (DPI). She sees the standards as a step in the right direction.

“For Wisconsin as a state, this is a huge shift. Our (previous) standards … were so incredibly general,” Amundson said. “We now have an expectation as to what children should learn and be able to do.”

Many educators around Wisconsin began implementing the standards when they were adopted by State Superintendent Tony Evers in 2010. But this year, the standards will be in place in virtually every public school in the state, and some private schools.

Tim Schell, director of curriculum and instruction for the Waunakee School District, said the transition to Common Core will be hard for elementary level teachers, who must overhaul both their math and literacy curricula.

“You’re beginning to see some of the actual impact, and these are big changes,” Schell said. “These are not easy changes.”

In May the state Legislature’s Joint Finance Committee amended the state budget to require a review of the standards and a study of the costs associated with them. It called for a series of public hearings on Common Core, which DPI plans to hold, and asked for a Legislative Council study committee to look into the issue.

The budget committee also added language to block additional Common Core standards, such as for science or social studies. But in fact, the Common Core initiative disbanded, and no further standards are planned. The Legislative Fiscal Bureau also is expected to release a report by Aug. 30 on the cost of implementing Common Core, as well as the cost to halt implementation.

“DPI began to implement Common Core in 2010 without any public input or legislative action,” state Rep. Dean Knudson, R-Hudson, said in a statement. “My hope is that after public input is had and the study received by the Legislature, we can more precisely assess which standards are best for our state’s schools.”

Common Core is a national initiative, with political undertones. The National Governors Association and the Council of Chief State School Officers developed the standards with input from a panel of experts and funding from the Bill and Melinda Gates Foundation.

Currently, 45 states and the District of Columbia have adopted the new standards. Minnesota has embraced the standards for English but not math.

But in some states, including Wisconsin, these standards are under fire as an ill-conceived bureaucratic intrusion into the classroom.

In April, Indiana passed a law calling for an evaluation of the standards and their costs, while stalling their implementation. Michigan, in its new state budget, prohibits spending state money on Common Core.

And several states, including Georgia and Oklahoma, have withdrawn from one of the groups developing Common Core-aligned standardized tests. 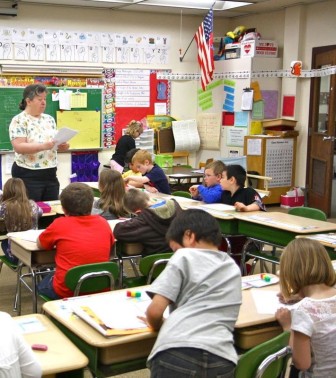 Most teachers across Wisconsin will incorporate the Common Core standards into math and English lessons this fall. Joseph W. Jackson III/For the Wisconsin Center for Investigative Journalism

Nationally, Republicans are split on whether the Common Core is a good idea. In early August, a handful of Republican governors including New Jersey’s Gov. Chris Christie — considered a likely 2016 presidential candidate — reaffirmed their support for the standards.

Gov. Scott Walker was an early supporter of the standards, but last week his office declined to comment.

In May, Wisconsin lawmakers held a special legislative hearing on the new standards. The turnout was so large that spectators spilled into an overflow room. Several speakers, including representatives from two Wisconsin school districts, the DPI, and the right-leaning Fordham Institute, testified in favor of the standards.

Committee members also heard from critics who painted Common Core as an exercise in federal overreach.

Joy Pullmann, a research fellow at the Heartland Institute — a conservative think tank that weighs in on education, health care and promotes skepticism that climate change is manmade — took up this theme. She said Common Core subjects students, parents and teachers to “unproven education theories, embedded in an Orwellian control system in which we have had no voice.”

Simac, who ran unsuccessfully as a Republican in a 2011 state Senate recall election, fears private schools and homeschoolers will be pressured to implement the Common Core standards as well.

“Is this another way to possibly pull the rug out of homeschooling and private schooling?” she asked in an interview.

Critics of Common Core agree on the need for K-12 academic standards, but oppose how these particular ones were developed.

They are troubled that the standards were developed nationally, not by individual states or school districts. They question the funding from the Gates Foundation, which seeks to improve education and healthcare worldwide. They even worry that the standards will lead to a national database of student information, and may be a step toward “one world government.”

The standards have been championed by Arne Duncan, President Barack Obama’s education secretary. And the administration offered Race to the Top grant money and No Child Left Behind waivers to some states that got on board.

Indeed, some critics of Common Core have dubbed it ObamaCore.

The Republican National Committee has condemned the standards as “an inappropriate overreach to standardize and control the education of our children.” It ripped “the collection of personal student data for any non-educational purpose without prior written consent.”

There is no mention in the standards about a national database for student information, and defenders of the initiative say there is no such intent.

“Common Core itself does not require any data collection,” said Jennifer Kammerud, legislative liaison for DPI, at the May hearing. She added that state and federal law already require some data gathering. However, Assistant State Superintendent Kurt Kiefer told the committee that data shared with the federal government cannot be traced to individual students.

New testing, funded in part by federal Race to the Top, is part of the deal. Beginning in 2014-15, all Wisconsin students in grades 3-11 will take standardized tests aligned with Common Core. The results will eventually be used as part of new evaluations of teacher effectiveness.

Mike Bormett, DPI policy and budget director, said these new tests will cost the state an additional $8.3 million next year. The tests are more costly than previous assessments because more grades will be taking the tests, they are more complicated and they require expensive software.

“These are higher standards,” Amundson said. “It’ll be a harder test.”

The educational establishment worries about the pressure the new tests will put on teachers and students. Skeptics also criticize the speed with which these standards have been adopted and the “one size fits all” approach of applying the same set of standards to students nationwide.

Stewart Purkey, associate professor of education at Lawrence University in Appleton, questions whether the standards will do anything to meet the special challenges of students with disabilities, or from diverse backgrounds.

“We just don’t know what the effect will be,” Purkey said. “At the very least we should be talking about taking a year to implement these and see how they affect students.”

Bringing it all together 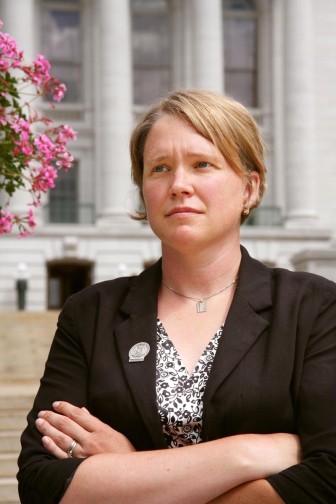 State Rep. Mandy Wright, D-Wausau, a supporter of the Common Core, was using the standards as an English teacher before her January inauguration. Joseph W. Jackson III/Wisconsin Center for Investigative Journalism

State Rep. Mandy Wright, D-Wausau, supports the standards. A former middle and high school English teacher, Wright sees them as a way to bring continuity across classrooms on what students are taught.

“People have really developed their niche and what works for them as teachers,” she said. “We needed something like this to bring it all together, to pull together all those different pieces.”

Wright recalls colleagues who framed an entire year of teaching around a dog theme or focused on the Holocaust. She thinks teachers can maintain that same individuality with the new standards.

And Wright believes legislators are too far removed to appropriately address problems in classrooms and districts. “We have experts on the ground who can address these concerns,” she said.

But Simac feels the Legislature should do more to block Common Core in Wisconsin. She and other activists plan to contact lawmakers to press them on the standards, which she believes will be an issue in future elections.

“I’m concerned that they’re going to brush it under the rug and hope that it all goes away,” Simac said.