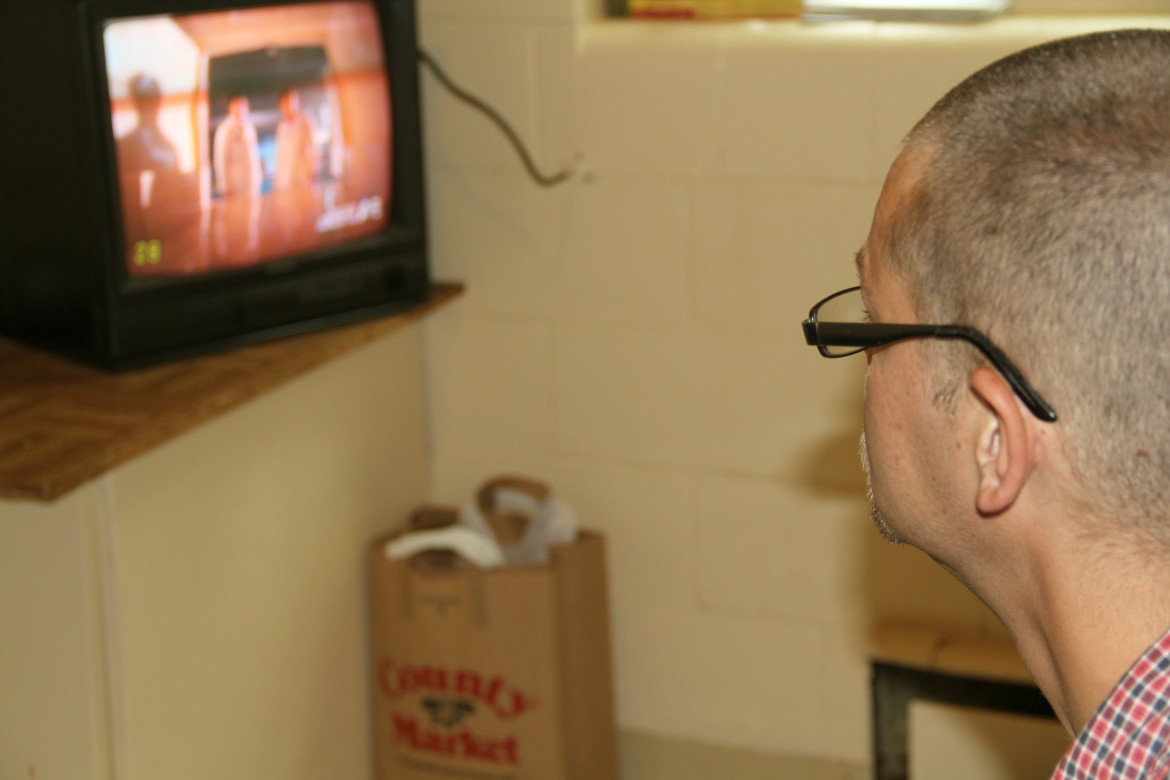 Justin Peebles, 32, watches TV in the room he rents at a halfway house in Wausau. He said he would rather be working, but has been waiting for help from a state agency since April. Tegan Wendland/Wisconsin Center for Investigative Journalism

Wait list long, caseloads high
As a result of long wait lists, Wisconsin’s Division of Vocational Rehabilitation has implemented a category system to prioritize clients with the highest need first. Some clients in Category 3 never get assistance.

On the radio: Tegan Wendland reports on the DVR backlog for Wisconsin Public Radio

Deep cuts: Hear Justin Peebles talk about what it’s like being unemployed.

The 32-year-old Wausau man is epileptic and needs a job that will allow him to work part-time in a safe environment, in case he has a sudden seizure. He worries that he soon will be evicted from his room at the halfway house because he cannot pay rent.

“I’ll go back to the (homeless) shelter, and I don’t know what’s going to happen after that,” Peebles said. “It’s something I worry about every day.”

Back in April, Peebles applied for services at the state Division of Vocational Rehabilitation, tasked with helping Wisconsinites with disabilities find work. But he said a counselor at the agency told him there was nothing she could do immediately, so he has been on a waiting list for the past three months.

In late June, Peebles called to ask what his status was and was told he had another two or three months to wait. He also has tried unsuccessfully for two years to get Social Security disability benefits.

“There is no way around it,” Peebles said. “There are no other programs that can help.”

Thousands of people with disabilities must wait for months to access state employment services, although the DVR has not requested the full amount of federal funds available to it for the past three years, the Wisconsin Center for Investigative Journalism has found.

That means more people like Peebles must remain on the waiting list, and for longer periods of time. And people with less serious disabilities are likely to receive no help at all, public records and interviews show.

DVR currently serves about 17,000 people, while an additional 4,077 are on its waiting list. Last year the agency found jobs for 3,200 people.

The agency has been cited for poor performance in the past. In 2000, a state audit criticized DVR for long wait times that are similar to the current delay in accessing services. 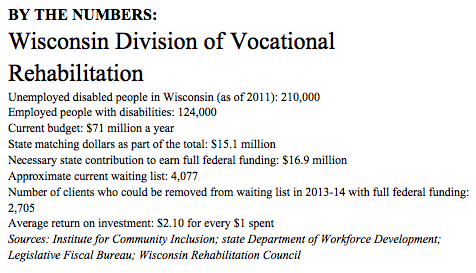 DVR officials, however, say they are pleased with their success in bringing the length of the wait list down from its peak of about 13,000 in 2009.

Cathy Steffke, advocacy specialist with Disability Rights Wisconsin, a nonprofit advocacy group, said that underfunding of DVR is “one of the biggest barriers to employment in the state.”

In the new fiscal year, Wisconsin will receive $55.6 million in federal funds to run its employment programs for people with disabilities, and spend $15.1 million in state funds. That is the minimum amount the state can spend on the $71-million-a-year program without being subject to federal penalties.

Wisconsin could get an additional $14.2 million in federal funds if it were to come up with a $3.9 million match to cover funding for the next two years, which DVR officials acknowledge would allow them to serve more people.

“If we did receive our full state match we could work with another 3,000 individuals,” DVR administrator Mike Greco said.

The nonpartisan Legislative Fiscal Bureau said earlier this year that DVR could nearly eliminate its waiting list over two years if it were to accept full federal funding.

However, Greco said he did not do that because the agency is already meeting the goals it has set for itself, in addition to meeting requirements set by the U.S. Department of Education and the Wisconsin Rehabilitation Council, which oversees the division.

DVR’s own projections show that the current funding level will cause the typical wait time for clients, currently four to five months, to grow by one to two months by the middle of 2015.

Greco said he is not worried about the current length of the wait, but “if it’s over six months, we tend to lose track of individuals.”

And that means some people who need and deserve help will not get it, said Linda Vegoe, chairwoman of the council that oversees DVR.

“For someone with challenges who may need a little coaching from the counselor, if they have to wait five weeks (to speak to a counselor) they can just give up,” Vegoe said. “And that’s the saddest thing of all I think.”

DVR officials said that while they cannot legally offer state-funded services during this waiting period, counselors can provide referrals to other agencies to those on the waiting list if they call and ask.

“The DVR program, I think, is one of the best laws that was ever written,” said Vegoe, who heads of the Client Assistance Program with the state Department of Agriculture, Trade and Consumer Protection.

“Do governments understand how important it is and that they should be supporting it? I don’t think so. It could have a greater impact on the state’s economy and on the lives of more people with disabilities.”

Wisconsin’s DVR program was created in the early 1920s. The agency, part of the state Department of Workforce Development, has 187 counselors and 43 locations throughout the state. 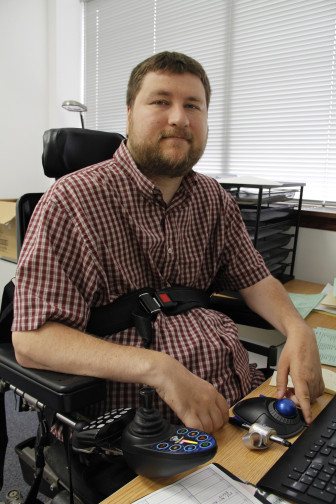 Nick Zouski, a caseworker at Access to Independence, says the need for state Division of Vocational Rehabilitation services is growing, and it is hard for clients to wait indefinitely for help. Kate Golden/Wisconsin Center for Investigative Journalism

Clients work with DVR counselors as they apply for jobs, arrange for special accommodations like assistive technology — such as hearing aids, wheelchairs and accessibility software — and navigate transportation issues, among a host of other services.

Advocates charge that it is still chronically underfunded and understaffed.

“The services are good, if you can get them,” said Nick Zouski of Access to Independence, a Madison-based nonprofit group that helps people with disabilities. “The major problem is that they’re just not available to a lot of people.”

Zouski has seen the importance of DVR’s services as both a client and a case manager. After he lost most of the use of his limbs in a diving accident in 1996, a DVR counselor helped him get his current job.

DVR helped Zouski buy a van with a lift for his wheelchair. It provided assistive technology at work, including a trackball mouse for his computer and tall desk to fit his wheelchair, and the agency paid for on-the-job training for his first three months.

Now Zouski helps others apply for DVR services, which he said are more crucial than ever given the tight job market.

“A lot of these people have immediate needs,” he says. “And some of the services they can really only get through DVR, and they are made to put their lives on hold.”

That is where Peebles is. He suffered a traumatic brain injury in 2010 when he fell down some stairs while carrying his bike. He soon developed epilepsy. Peebles formerly worked as a Wal-Mart stocker. He said he loves hard work but needs help finding a job of no more than nine hours a week.

“It’s pretty hard, you know. There aren’t many jobs like that out there,” Peebles said.

According to a national report by the Institute for Community Inclusion, a research and advocacy group at the University of Massachusetts-Boston, about 124,000 working-age Wisconsin residents with disabilities were employed in 2011. Another 210,000 were out of work. Some of each group received Social Security disability benefits. 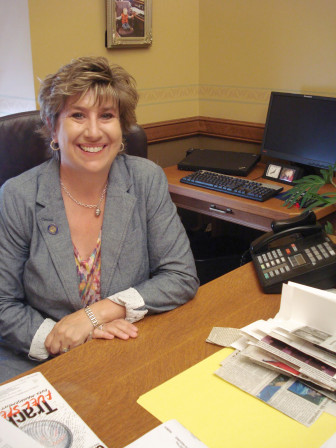 Jennifer Shilling (D-La Crosse) voted to take the full federal funding available to DVR. She said it does not make sense to turn down the federal help when the state is behind most of the rest of the country in job creation. Tegan Wendland/Wisconsin Center for Investigative Journalism

Critics argue that DVR should request all available federal funding to work toward fuller employment for the disabled.

“We should be investing in programs that are helping people find employment,” said state Sen. Jennifer Shilling, D-La Crosse. She thinks it makes no sense to turn down the extra federal help when the state is behind most of the rest of the country in job creation.

“Anybody who wants to work, we should be giving them the tools to allow them to meet those dreams and those goals for full employment,” Shilling said.

In May, the Legislature’s Joint Finance Committee, on a 12-4 party line vote with Republicans in the majority, voted to keep the state’s contribution to the $15.1 million minimum.

Lawmakers were not swayed by the Legislative Fiscal Bureau’s analysis of how spending an extra $3.9 million over the next two years the state could capture an additional $14.2 million in federal funds for DVR.

Rep. Dean Knudson, R-Hudson, was the only Republican legislator on the Joint Finance Committee to respond to repeated calls and emails for comment over the past month.

“We chose the option that we did because it allows us to provide services to those with the greatest need immediately,” Knudson said. He argued that the governor and Joint Finance Committee “struck the right balance of maintaining our state funding and protecting Wisconsin citizens from potential further reductions in federal funding.”

Program Director at Access to Independence, Jason Beloungey, insisted that DVR’s underfunding hampers the quality of the services it provides — for example pushing people into jobs that don’t suit them.

“That might work short-term,” Beloungey said. “But often we find that people come back because it’s not successful, they weren’t prepared, they didn’t get the right education or they really didn’t want to do that job.”

Worth every penny, and then some

According to DVR, every dollar spent on its clients generates a $2.10 return as people move off public assistance and back into the economy.

“Not only do people become self-sufficient and independent, but they’re getting a salary and they’re using that salary in the economy for the state of Wisconsin,” Greco said. “They’re buying food, housing and so forth.”

Patricia Bronk, a former DVR counselor who now is looking for a job, said that despite 16 years as a rehabilitation counselor and two years as a manager, being deaf is a major hurdle to getting work. For most disabled people seeking jobs in the state, she said, the outlook is grim.

“We are human, we are people, we deserve to work,” Bronk said. “We deserve to be a part of our community and earn money and pay taxes.”

Peebles said he wants to work because it would give him a sense of purpose.

“Of course I need to pay the bills, but it’s not really about the money, it’s about being productive, doing something,” Peebles said.

But all he can do now is sit and wait for the call from a DVR counselor, telling him he has been activated from the waiting list and is eligible to receive assistance.

Said Peebles: “I could really use the help.”

Documents related to this story

3 thoughts on “State passes up federal disabilities aid for jobless, despite backlogs”