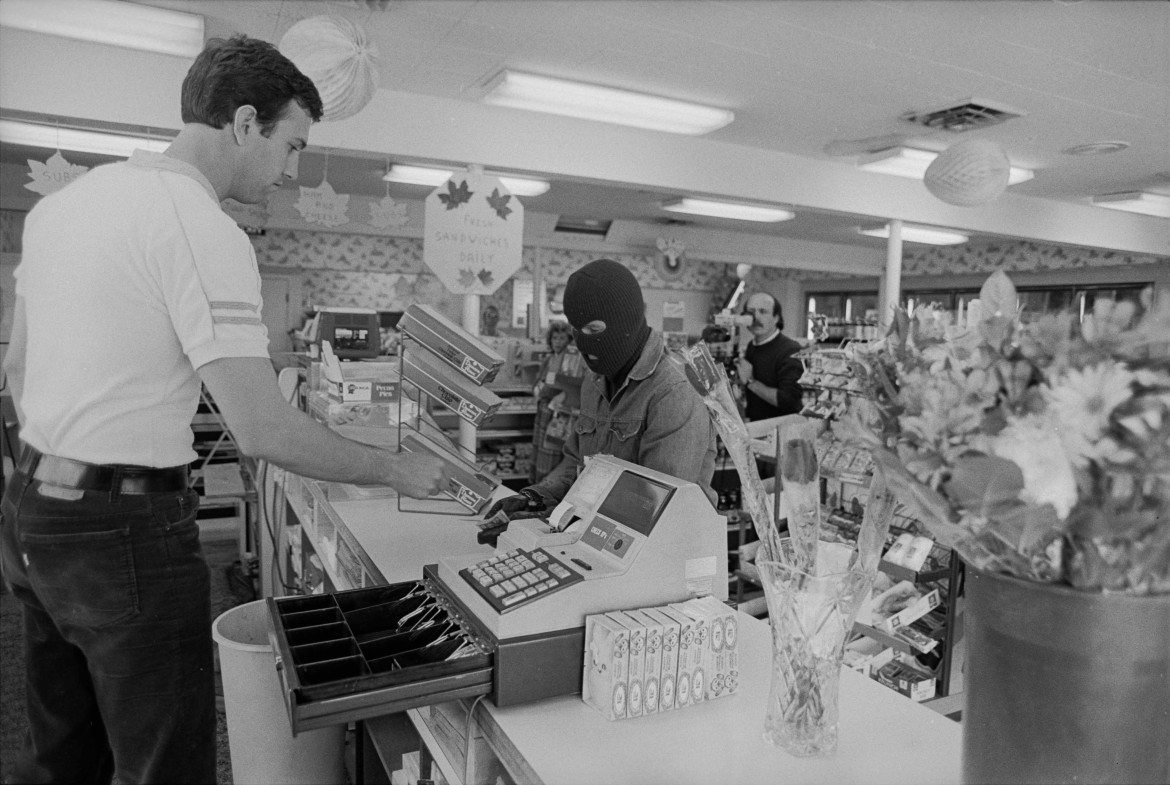 This story is part of “Cold Cases: Tracking Wisconsin’s unsolved murders,” a project that aims to to generate new, valuable leads for Wisconsin homicide investigators.

The four-week series is led by Gannett Wisconsin Media. It is produced in collaboration with the Wisconsin Center for Investigative Journalism.

Andrew Nehmer may have tried to tell what happened.

The phone in the Open Pantry where the 20-year-old student worked was off the hook. Police speculated that he started to make a call but then realized that he couldn’t speak.

It was April 22, 1986. Just past 4 a.m., a witness saw Nehmer stagger from the store and collapse in the parking lot. Blood pooled around him. He was taken to a nearby hospital and pronounced dead.

An autopsy found that Nehmer died from massive internal bleeding caused by a single knife wound to the neck. He probably died within three or four minutes. 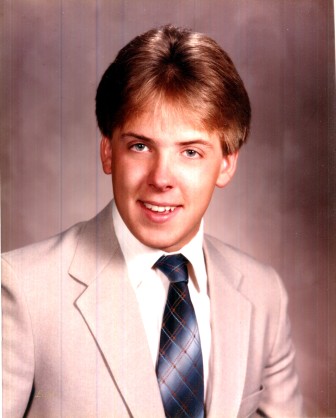 Andrew Nehmer, a 20-year-old UW-Madison student, was murdered in April 1986 while working the night shift at an Open Pantry in the town of Madison. Courtesy of the Wisconsin Department of Justice

Nehmer was a communications arts major with an interest in film at the University of Wisconsin-Madison. The Open Pantry where he worked was nearby, in the town of Madison.

The murder of Andrew Nehmer is among at least 282 cold cases in Wisconsin since 2003, according to a tally compiled by Gannett Wisconsin Media using data from the state Office of Justice Assistance and other sources. The Wisconsin Center for Investigative Journalism is working with Gannett on a series of articles exploring Wisconsin cold cases.

Nehmer was remembered as thoughtful, independent, caring. One of his former teachers at Watertown High School told a Madison paper, “He was always concerned about his fellow man, but sometimes that got him in trouble.”

Inside the Open Pantry were signs of a struggle. The safe behind the counter was unlocked and found to be full of money. Dollar bills and change were lying on the floor.

Police had few clues to go on, but one obvious suspect: Donald Ameche Braxton, then 22, who was eventually charged with multiple crimes during this same period in this same area, including several convenience store armed robberies. This included an Open Pantry, though not the one where Nehmer worked.

A habitual cocaine user whose criminal misdeeds began when he was a juvenile, Braxton used a gun in these crimes. He’d terrorize his victims, threatening to “blow your head off.” He stressed to his judge at his sentencing and in a subsequent letter from prison that his crimes did not involve physical violence. 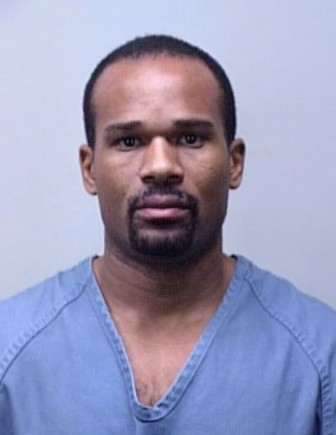 Donald Ameche Braxton, shown here in a 2002 mugshot, is a suspect in the 1986 murder of UW-Madison student Andrew Nehmer, 20. Courtesy of the Dane County Sheriff’s Office

Braxton was convicted of four felonies and sentenced to 25 years in prison. He served 11, followed by 14 years of extended supervision.

Now a resident of Colorado, Braxton, 49, is the subject of renewed attention and could yet be charged with Nehmer’s murder, more than 27 years after it occurred. He has denied involvement in Nehmer’s killing, and he passed a lie-detector test.

Town of Madison Detective David Bongiovani, a compact, powerfully built man with decades of law-enforcement experience, has been working on the “cold case” for the past four years.

It’s an investigation that highlights both the opportunities that new technologies present for solving old crimes and the challenges posed by degraded evidence, vanishing witnesses and fading memories.

“Time never helps anything,” Bongiovani said in a recent interview. “But it’s what I have to deal with.”

Bongiovani was hired by the town in 2008, after logging 25 years with the Dane County Sheriff’s Office. He has worked exclusively on the Nehmer case and the town’s only other unsolved murder, the 1992 beating death of a 32-year-old man, with support from two cold case agents with the state Department of Justice.

“It’s hard to stay glued to something for this long,” Bongiovani conceded.

The case consumes his attention, sometimes even in his sleep. He keeps a notepad by his bed, to jot down ideas that occur to him. But Bongiovani, who has himself lost a child (his 17-year-old daughter died while driving drunk in 2007), knows he is not the only one who can’t forget. 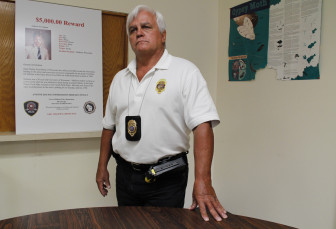 Town of Madison Police Detective David Bongiovani said he’s made progress on the cold case of Andrew Nehmer, who was murdered while working at an Open Pantry in 1986. Taken July 10, 2013. Kate Golden/Wisconsin Center for Investigative Journalism

Nehmer’s mother, stepfather and brother attended an April 10 press conference at the town of Madison police department, but asked not to be interviewed. The event was called to announce that Open Pantry was offering a $5,000 reward for information that could help solve the case. It’s the same amount the company, then under different ownership, offered in 1986.

“We firmly believe there are people in or near this community who can help us solve this case,” Police Chief Scott Gregory stated. Added Bongiovani, “We don’t need a whole lot more.”

The pair confirmed that Braxton was a key suspect. This was not something they had intended to reveal, but the Wisconsin State Journal obtained the search warrant used to compel Braxton to provide DNA samples two years before. 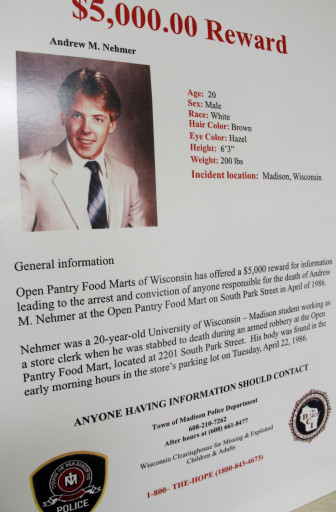 Town of Madison Police this year advertised an Open Pantry offer of a $5,000 reward, hoping to find out who murdered Andrew Nehmer at a convenience store in 1986. Kate Golden/Wisconsin Center for Investigative Journalism

“Therein lies more information than I really wanted out there.” Bongiovani said.

The search warrant listed the robberies Braxton was charged with in 1986, including several in which he wore a bandana to cover his face. It revealed that a red bandana had been recovered from the Open Pantry murder scene.

In 1996, the search warrant revealed, there had been another major break in the case. A woman named Charmaine Smith came forward to report that she had been present at an apartment on the morning of Nehmer’s murder when Braxton arrived with blood on his shirt and money to buy cocaine, including a $2 bill.

At the time of the robbery, Open Pantry told police that the cash register contained a $2 bill as “bait money” — bills used to aid the tracing of stolen currency.

Bongiovani knows well that DNA can be both a blessing and a curse.

It provides a new tool for exploring old cases, but it also can create unrealistic expectations. Juries and sometimes even prosecutors expect that DNA will seal the deal. Sometimes, it does. Sometimes it can’t.

The DNA sample from Braxton was obtained in Colorado on April 18, 2011, the day before his extended supervision expired. Testing by the Wisconsin State Crime Laboratory Bureau subsequently concluded that Braxton could not be excluded as the source of DNA found on the red bandana recovered from the scene of Nehmer’s murder.

But there was not enough DNA for a definitive match. Bongiovani confirmed that the Crime Lab was able to quantify the likelihood that Braxton was the source of the bandana DNA but declined to disclose this: “That’s what a trial is for.”

Braxton was identified as a suspect in Nehmer’s murder at his sentencing hearing in February 1987. His prosecutor, Dane County Assistant District Attorney John Burr, told the court that four of Braxton’s fellow jail inmates had come forward to report that he “took responsibility for one of the unsolved killings in Madison.”

Burr, who retired in 2006, remembers Braxton as an especially bad egg.

“He was one of our more violent and prolific individuals back in those days,” Burr said. “You didn’t see many guys who got charged with robbery, armed robbery and burglary all at the same time.” 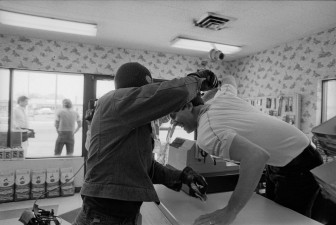 “It wasn’t the way he committed his armed robberies,” said Foust, the chief judge for a multi-county judicial district. “Ameche used a gun. He never used a knife.”

Moreover, Braxton passed a polygraph test conducted in 1987 by a respected practitioner. This included his denials that he stabbed the Open Pantry clerk or was present when this happened.

As for the polygraph test, Bongiovani tracked down the practitioner, since retired, and asked if he still had the raw results, so someone else could take a look. But by this time, these records were gone.

Braxton, released from prison in early 1997, has not had any further arrests. He has a steady job in Colorado. He did not respond to an interview request letter sent to his home.

Jessa Nicholson, Braxton’s attorney, said the defense has hired a private investigator to explore “other theories” of the crime and seek exculpatory witnesses. She noted that her side faced the same limitations as the prosecution.

“When you’re dealing with something that happened years ago,” Nicholson said, “much of the best information is gone.”

The end is near?

Over the past four years, Bongiovani and the two cold case detectives from the Department of Justice’s Division of Criminal Investigation have worked to build a case where others have failed.

Hundreds of pages of reports have been gathered, many from archaic systems. Bongiovani traveled to Green Bay in 2009 to present information and cull suggestions from a cold case review team run by the Wisconsin Association of Homicide Investigators. Dozens of tips, large and small, have been tracked down.

And, Bongiovani said, “We’ve re-interviewed probably every witness in this case.”

Some have wanted to cooperate.

“Believe it or not, they’ve come forward because they thought it was the right thing to do,” Bongiovani said.

It’s something he’s seen before in his long career: “Even people who commit armed robberies and burglaries and sexual assaults, a lot of them will draw the line at murder.”

At one point, Bongiovani described the Nehmer case as being “near what you think is the end.” He’s now preparing reports on his past several months of work to submit to the Dane County District Attorney’s Office. He said this will give the office more evidence than before, when it felt there wasn’t enough.

After 27 years, the story of what happened to Andrew Nehmer may finally be told.