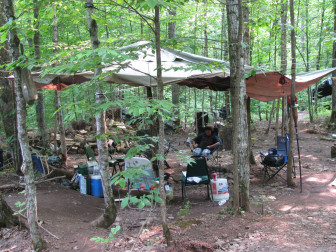 A tarp covers a fire circle at the Ojibwe harvest camp in the Penokee Range. Ron Seely/Wisconsin Center for Investigative Journalism.

Stories about the mine

Hard to say whether it was the fry bread passed out by tribal members to supervisors on the Iron County Board, but the outcome was positive for the Lac Courte Oreilles band of Lake Superior Chippewa Tuesday as the board voted to work with the band and find a way to keep a controversial harvest camp open in the Penokee Range.

Iron County Clerk Mike Saari said at least 125 people, mostly supporters of the harvest camp and opponents of the proposed Gogebic Taconite iron mine, were present as the board ordered its forestry committee to work with the LCO and help the tribe obtain a camping permit that will keep the camp in operation.

“They’re going to try and work something out,” Saari said.

More than a dozen people addressed the board, all of them urging it to vote against a recommendation from the county’s forestry committee to bring civil and criminal charges against camp organizers for not having a long-term camping permit.

The camp was established by the tribe in May as a way to educate people about the tribe’s use of the Penokees for gathering, hunting and fishing and about the potential threat posed by the proposed 4 ½-mile-long open-pit iron mine.

Rusty Barber, an LCO tribal member, opened the public comment session by making an offering of tobacco. He urged both sides to continue talking. Saari said the 60 chairs set up for the meeting were full and added that dozens of people were also standing outside the meeting room.

The camp has been so successful that the Bad River Chippewa band, whose reservation and extensive rice beds are downriver from the proposed mine, is establishing a second camp on land owned by the Nature Conservancy near Caroline Lake, the headwaters of the Bad River.

In an interview, Bad River Chairman Mike Wiggins, Jr. said the band has frequently used the area for ceremonies. The lake and headwaters are just southwest of the proposed mine while the LCO harvest camp, named for the traditional seasonal camps used by the Chippewa, is northeast of the proposed pit.

Glenn Stoddard, a lawyer for the Bad River Chippewa, said the camps are the first efforts by the tribe to use treaty rights to combat the proposed mine. In those treaties, the Chippewa ceded about the northern third of the state in exchange for the rights to hunt, fish and gather on the land. Those rights extend to off-reservation lands and have been upheld in court battles over the last 50 years.

Stoddard said the treaties not only reserve the Chippewa rights to hunt, gather and fish off their reservations but also protect habitat that supports those activities. If a project such as the mine has the potential to damage the habitat, it could violate the treaties, Stoddard said.

Ron Seely joined the Center as a part-time reporter, editor and student mentor in June 2013 after nearly 35 years as an award-winning environmental reporter for the Wisconsin State Journal.

One thought on “Iron County Board: Harvest camp can stay”