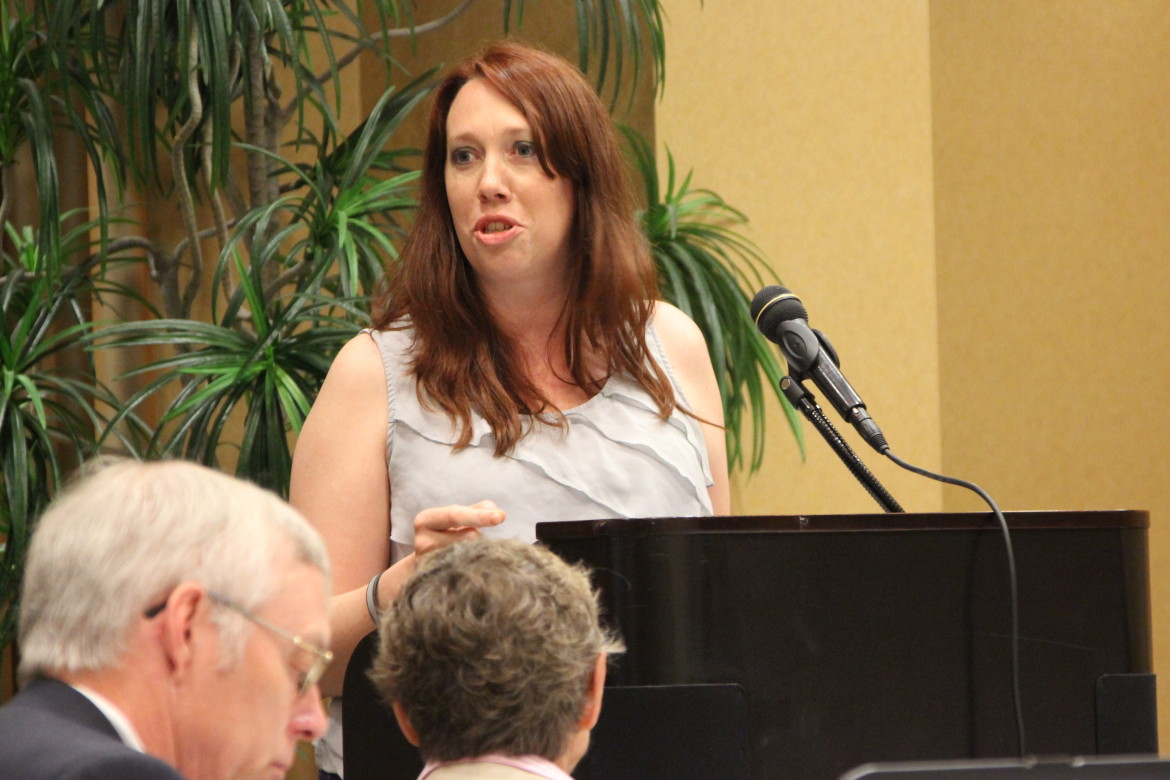 Melissa Smith, organizer of Friends of the Wisconsin Wolf, testified against increasing the quota for wolf hunting at a June 26 meeting of the Natural Resources Board in Wausau.

WAUSAU — The state Natural Resources Board unanimously approved a 37 percent increase in the quota for wolf hunting Wednesday, despite opposition from speakers who questioned everything from board members’ research to their consciences.

“Each and every one of you has your consciences and you’re either part of the solution or part of the problem,” Pickett resident Alice Miller told the board. “It’s a shame that Wisconsin residents have to come up and defend our wildlife. That’s what the DNR’s supposed to do.”

The board, the DNR’s policy-making arm, set the quota for hunting and trapping wolves in the 2013-14 season at 275 wolves, up from last year’s 201. Like last season, the DNR decided to offer 10 permits for each wolf in the quota.

Bill Vander Zouwen, the DNR’s wildlife ecology section chief, said the number was a compromise of “quite a diversity of opinions” and would help the DNR achieve its established goal of reducing the wolf population without destabilizing it.

About a dozen people spoke at the meeting, seven in opposition. Two of the supporters were part of the DNR’s wolf advisory committee, which recommended the new quota to the board. A third was the chair of the wolf study committee of DNR’s Conservation Congress.

Ralph Fritsch, who sits on the advisory committee, and represents the Wisconsin Wildlife Federation, which is comprised of hunting, fishing, trapping and forestry-related groups, supported the new quota for making progress toward the target population of 350. He said the wolf hunt in 2012 was ineffective in reducing the wolf population, which the DNR estimates at just over 800, at minimum.

“The Wisconsin DNR has the ultimate responsibility to properly manage the wolf population in the state, which is currently at least 2.5 times the management goal of 350,” Fritsch said. “The goal was based on the social carrying capacity of wolves in the state and was made as a commitment to farmers, hunters and citizens of Wisconsin.”

Zouwen, who also sits on the advisory committee, said everyone in the group agreed on the number, except the member representing Ojibwe tribes.

Several speakers Wednesday accused the committee, made up of DNR staff and other stakeholders, of failing to represent the interests of most Wisconsinites. The DNR recently decided to remove University of Wisconsin researchers from all wildlife advisory committees (including the wolf committee).

Tom Hauge, director of the DNR’s wildlife bureau, described the change to the Wisconsin State Journal as a move “to be efficient with department resources.” 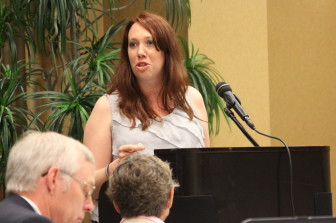 Melissa Smith, organizer of Friends of the Wisconsin Wolf, testified against increasing the quota for wolf hunting at a June 26 meeting of the Natural Resources Board in Wausau.

Others were more critical. Melissa Smith, organizer of Friends of the Wisconsin Wolf, said the advisory committee was dominated by special interests and the quota was set dangerously high.

“We need to listen to scientists, get the best data possible, and run it through the best minds we can,” Smith said.

Howard Goldman, Minnesota senior state director of the Humane Society of the United States, said he had been on the advisory committee for three years before he wasn’t invited back this year.

“Wolves present no threat to humans; they’re being hunted only for sport and trophy,” Goldman said. “It’s taken 38 years for wolves to recover in Wisconsin. We must be very conservative in our management approach. Too much is at stake to do anything else.”

Goldman cited a recent poll of Wisconsin residents that found 81 percent of respondents opposed “the trophy hunting and trapping of wolves for sport,” after being told wolves are an important part of the ecosystem.

In defense of the composition of the committee, Zouwen said, “We’re past the recovery stage; now we’re in the management stage. It makes the most sense to have the people at the table who are OK with managing and not always fighting that battle.”