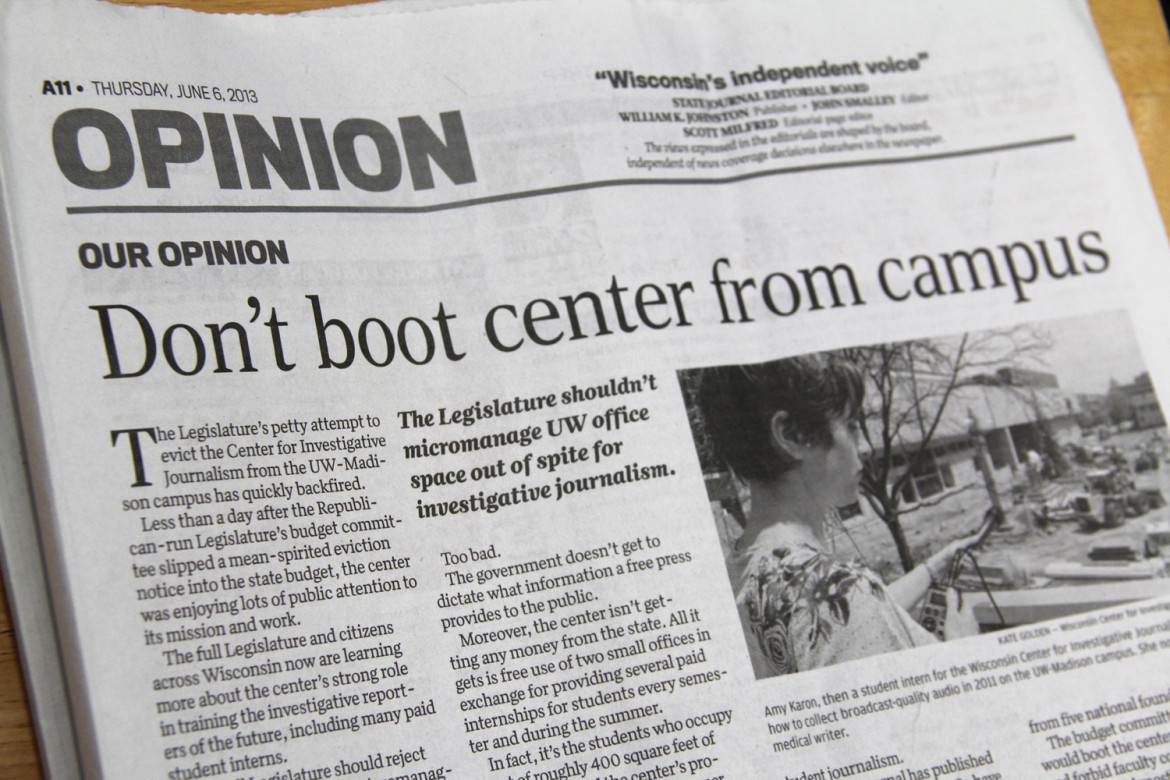 The Wisconsin State Journal's June 6 editorial on what it calls a "mean-spirited eviction notice."

Coverage of this issue

See the Center’s list of news stories and editorials below.

A Milwaukee Journal Sentinel reporter broke the news with a tweet at 5:19 a.m. Wednesday: Joint Finance Committee lawmakers had amended the state budget to evict the Wisconsin Center for Investigative Journalism from its offices at the University of Wisconsin and prohibit UW employees from working with the Center.

Motion 999 was approved 12-4 down party lines, with Republicans in the majority, around 6 a.m.

The controversy and coverage began shortly afterward, from news organizations and groups across the nation and the political spectrum.

“It is the height of arrogance, and everybody who voted for that should be embarrassed. It smacks of the kind of tactics you would expect from Vladmir Putin or Hugo Chavez — not in Wisconsin,” Sen. Dale Schultz, R-Richland Center, said in an interview with Wisconsin Public Radio’s Joy Cardin Thursday morning.

Conservative Wisconsin radio host Charlie Sykes and liberal pundit Rachel Maddow of MSNBC may not agree on much, ordinarily — but Sykes and MaddowBlog contributor Zachary Roth both went to bat for the nonprofit, nonpartisan Center.

Roth called the move “especially alarming” and noted that the JFC relied on the Center’s reporting recently in a vote delaying the expansion of a GPS offender monitoring system until its reliability could be proven.

Sykes, on RightWisconsin.com, urged conservative lawmakers to “sober up, see the light, and take this out of the budget.”

“At a time when conservatives should be embracing government restraint, the motion combines some of the worst aspects of the IRS and DOJ scandals – using government to punish those perceived as political enemies combined with a clear assault on the free press,” Sykes wrote.

Sykes’ view wasn’t universally shared by conservatives. His post appeared alongside one from David Blaska showing the Center’s logo with the headline “Center for Investigative Propaganda.”

And Assembly speaker Robin Vos, R-Rochester, told the Journal Sentinel that he believed the Center was biased and shouldn’t have taxpayer support.

The Center occupies two small offices at the UW-Madison School of Journalism and Mass Communication. It receives no funding from the school. In a facilities use agreement, the Center receives office space in return for hiring at least five interns from the school each year and providing educational services.

LINK: Read more about the Center and its response to Motion 999: Center responds to JFC lawmakers’ early-morning eviction vote

The University of Wisconsin quickly came to the defense of the Center and its award-winning collaboration with the journalism school, as did many of its students and employees.

Greg Downey, director of the journalism school, called the measure “a direct assault on our academic freedom in research, teaching, and service — and on the Wisconsin Idea.”

Gary Sandefur, dean of the university’s College of Letters & Science, which oversees the journalism school, said it was “legislative micromanagement and overreach at its worst.”

Eleven former interns signed a letter to the state Legislature saying that “we can attest that the award-winning Center’s presence on campus has been fundamental to helping us begin our careers as journalists.”

The Madison Pro chapter of the Society of Professional Journalists and the Investigative News Network issued a statement in the Center’s support. And the Wisconsin State Journal wrote an editorial titled “Don’t boot center from campus.”

The Center’s work is published by more than 230 news outlets across Wisconsin and the nation. As of May 2013, it has published 107 major reports and nearly 100 columns, reaching more than 25 million people.

Said Sen. Schultz: “I am certainly hoping that if the Legislature doesn’t come to its senses that Gov. Walker will exercise some maturity and take this out. This sends a signal about our state that I don’t think is very flattering, and find personally deeply distressing.”

“We can and must do better than that,” Schultz said.

News about the Motion 999 controversy

Stories from national and out-of-state media