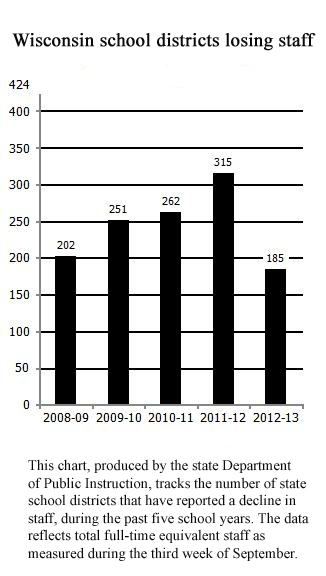 The number of employees did drop in some program areas and in some districts, according to the DPI’s summary report. And overall staffing remains significantly lower than five years ago.

“District job losses as the result of budget cuts have stabilized, and in some cases become one-year positive re-adjusts,” DPI spokesman John Johnson said. Despite this rebound, he said, many districts are still hurting for staff “and student services programs have been cut dramatically.”

The data, released this week, tally staff levels for the 2012-13 school year, as they existed on the third Friday in September.

Total student enrollment has declined only slightly over this five-year period, from 866,871 students in 2008-09 to 863,737 students in 2012-13. So the state’s school districts are educating roughly the same number of students with significantly fewer staff.

“When state aid and taxing authority do not keep pace with inflationary cost increases, school districts must make cuts,” the DPI report said. “Because PK-12 education is a labor intensive endeavor, budget cuts in recent years have had a significant impact on school staffing levels across the state.”

But the numbers call into question some of the dire pronouncements made by opponents of Walker’s changes to collective bargaining and school financing, which passed the Legislature in 2011.

Turner said he was surprised by the new numbers, “given the magnitude of cuts that school districts have had to do” in recent years. He speculated that many districts have already cut staff as much as possible, “so now they’re cutting other critical areas.”

Last year Walker was criticized, and even drew a “False” rating from PolitiFact Wisconsin, for stating that most school districts saw a staffing increase in 2011-12. This year that statement appears true.

Overall, 185 districts reported losing staff last year, down from 315 which lost staff in 2011-12, according to a chart provided by Johnson. That means staffing stayed the same or increased last year at 239 districts, a majority.

Walker spokesman Tom Evenson, asked to comment on the DPI report, said in an email: “Providing access to a great education means having great teachers, and thanks to our tough but prudent decisions, we can get great teachers and pay to keep them here.”

The report found that staff numbers fell last year in a broad category that includes professional and support staff. This category saw a one-year decline of 367 FTE positions. There were also declines last year in the number of school librarians and career and technical education teachers.

But staffing was up for administrators, aides and teachers, the report said.

Overall the number of public school teachers was up 156 FTE positions in 2012-13 from the prior year. This increase was driven in large part by gains in a few larger urban districts, Johnson said.

The Madison Metropolitan School District saw a one-year gain of 150 teachers and 290 total positions, the DPI data shows. Johnson said the gain in teachers was due largely to the district’s popular new 4-year-old kindergarten program.

Other districts showing a significant increase in teaching staff in 2012-13 include Milwaukee (up 58), Appleton (47) and Green Bay (33). Milwaukee saw an overall one-year decrease of 248 staff positions, to a total of 8,751.

Click here to download a document containing staff numbers for all state school districts going back to 2008-09.

The DPI data showed teaching staff declines in the state’s rural areas, towns and suburban areas. This trend continued in 2012-13 even as the city-based districts saw a one-year rise.

“The smaller the organization, the bigger the effects,” Johnson said.