It’s hard not to feel a bit sorry for Rebecca Blank, incoming chancellor of the University of Wisconsin-Madison.

Sure, the acting U.S. commerce secretary, set to start in July, will make $500,000 a year — plus benefits and perks including a university residence and car, money for travel and entertainment, and an unpaid academic appointment for her husband.

But she’ll be stepping into a host of controversies, drawing flak from all directions. As one UW-Madison student quipped, “Blank is not starting off with a blank slate.”

There’ll be ongoing fallout from some legislators’ volcanic eruptions over revelations that the UW System has a $648 million reserve fund. Though this is in line with other state systems, Wisconsin politicians are “disgusted.” Observers expect a two-year tuition freeze and the axing of some or all of the additional university funding proposed in Gov. Scott Walker’s 2013-15 budget.

The UW-Madison is also under fire over its ties to Palermo Villa of Milwaukee, which makes Palermo’s Pizza.

A strike was launched last June 1, days after about three-fourths of the factory’s 200 production workers signed a petition seeking to unionize. About 75 workers were fired when they were allegedly unable to verify their immigration work status; others were terminated for other reasons.

Around this time, Palermo’s inked a three-year, $600,000 deal under which its pizza is sold at Kohl’s Center and Camp Randall events, and promoted in those venues and elsewhere. A separate licensing agreement, which lets its pizzas be sold by Roundy’s under the Bucky Badger logo, has earned the university nearly $20,000 since 2010. 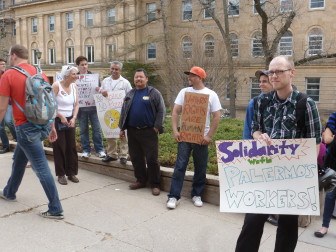 Students and others gather outside Bascom Hall on April 29 to protest the University of Wisconsin-Madison’s ties to Palermo’s Pizza. Bill Lueders/Wisconsin Center for Investigative Journalism

Groups including the UW-Madison Student Labor Action Coalition are pressuring interim Chancellor David Ward to sever these ties. More than 10,000 names appear on an online petition to this effect.

The movement teems with youthful exuberance. The main website for the anti-Palermo’s campaign is called sliceofjustice.com. One of its rallying cries is “No justice. No piece.”

Last November, the UW-Madison Labor Codes Licensing Compliance Committee urged the university to move toward ending its contract. A report issued in February by the Worker Rights Consortium, a labor rights monitoring organization that lists the UW-Madison as an affiliate, concluded that Palermo’s has “engaged in serious violations of worker rights.”

Palermo’s, in a statement, called the report “a work of fiction” created to punish the company for complying with federal immigration laws.

Last fall, the National Labor Relations Board dismissed allegations that the 75 workers were fired in retaliation for protected organizing activities. An appeal of this ruling was rejected in late April.

Ward trumpeted this finding, saying that while the university continues to urge an end to the labor dispute, “we believe that cutting ties with Palermo’s at this time is not warranted based on the facts.” 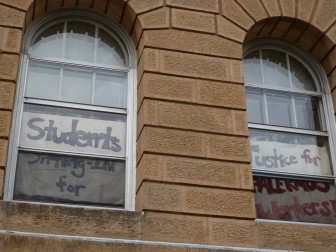 But Richard Saks, the Milwaukee attorney who lodged the complaint, notes that not all charges were dismissed. The NLRB, he says, “has been prepared to issue a complaint and prosecute Palermos for various other serious labor law violations.”

On April 29, a dozen protesters occupied a reception area outside Ward’s office for about three hours, until removed by police, while about 100 others rallied outside. They sang “Solidarity Forever” and chanted “Hey hey, ho ho, Palermo’s contract’s got to go!”

One speaker, Scot McCullough of the UW-Oshkosh, reflected that college students like himself are in “a unique stage in our lives.” They won’t be denied a degree for speaking out; they aren’t beholden to employers who can use a paycheck to keep them in line.

“We’re free,” he told the crowd. “The question is, what do we do with that freedom?” The choices he outlined: Use it to benefit oneself, or try to help others.

That’s a good question for college students to ask, even if the answers they come up with make things difficult for the people who run universities.

One thought on “UW brass caught in crosshairs”