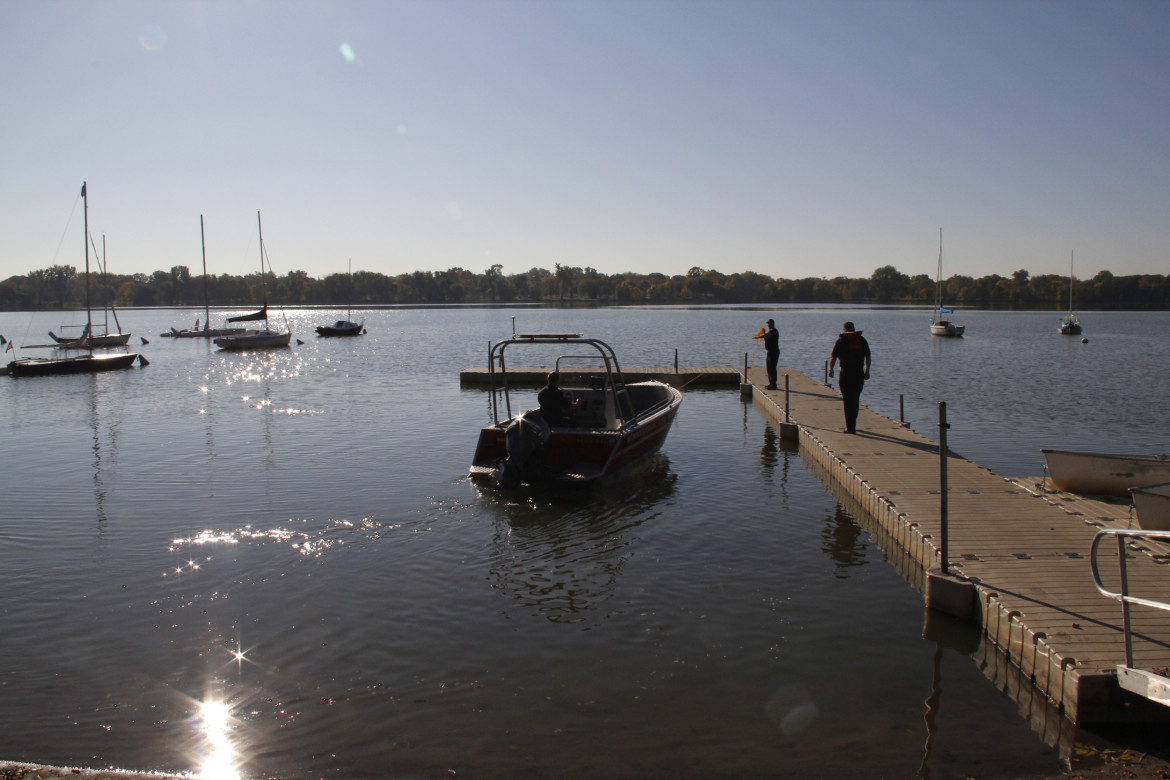 Lake Nokomis in Minneapolis, shown here in October 2012, is popular with swimmers, fishermen and boaters, but it — like most Minnesota lakes — contains a cocktail of troubling chemicals at trace amounts. Kate Golden/Wisconsin Center for Investigative Journalism

Read more stories in the Center’s investigation of endocrine disruptors in the environment.

On a midsummer morning last year at popular Lake Nokomis in Minneapolis, Mark Ferrey dipped a brown glass bottle into the water. His hands were gloved, he had drunk no caffeine, he wore no insect repellent. The slightest contamination would ruin the sample.

Below the sparkling surface swam muskies and walleye. Triathletes would be swimming there the next day. But Ferrey, a Minnesota Pollution Control Agency researcher, knew his sample would most likely turn up a cocktail of chemicals at trace levels.

According to results released last week, the Nokomis water was contaminated that day with a component of plastic, ibuprofen, a disinfectant used in hand soap, an antibiotic used on swine, a breakdown product of cocaine, an antidepressant, a fungicide and a drug used to treat Parkinson’s disease.

Some of the Nokomis cocktail’s most worrisome ingredients, the plastic component bisphenol A (BPA) and the disinfectant triclosan, are likely endocrine disruptors, chemicals that can interfere with the body’s hormone system.

Potent at extremely low concentrations, they can cause male fish to develop female characteristics. Because the endocrine system regulates a wide variety of the body’s functions, scientists have pegged them as possible causes for a host of health problems in wildlife and people.

When Ferrey started looking for endocrine disruptors in a dozen Minnesota lakes in 2007, he found them in every one — even the remote ones that were supposed to be pristine reference lakes.

That meant they “may not be as pristine as we were thinking,” Ferrey said.

In that first study, Ferrey’s collaborators lowered cages of male lab minnows into the lakes. After three weeks, most of them became feminized.

They produced an egg yolk protein that normally only females make. Some of them grew egg cells in their testes, or made fewer sperm. It was not just the lab fish — the resident sunfish, perch, minnows and shiners showed the effects of exposure to something like the hormone estrogen, too.

Ferrey, working with the U.S. Geological Survey and university scientists, sampled streams and rivers and found estrogenic chemicals downstream of wastewater treatment plants — and upstream, too.

In summer 2012, his agency sampled 50 more lakes, including Nokomis, with U.S. Environmental Protection Agency funding. A colleague is testing groundwater.

Nokomis was hardly unique. Ferrey found some chemicals in all but three lakes, and found 38 of the 125 largely unregulated chemicals he looked for. In a separate study of streams and rivers, Ferrey found 18 personal care products or pharmaceuticals.

Susan Sylvester, head of the Wisconsin Department of Natural Resources’ surface water bureau, told the Wisconsin Center for Investigative Journalism she was “impressed” by what the Minnesota researchers were able to show — but didn’t have the money for such monitoring.

“I think that we could probably assume that if we looked for these chemicals, we would find similar kinds of products as well,” Sylvester said. 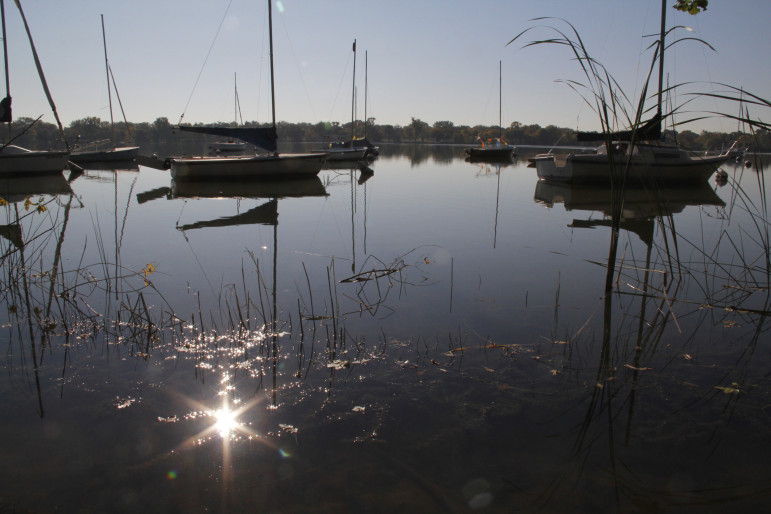 Water samples from the popular Lake Nokomis in Minneapolis, shown here in October 2012, contained a component of plastic, an antibacterial soap ingredient, an antibiotic used on swine, a breakdown product of cocaine, an antidepressant, a fungicide and a drug used to treat Parkinson’s disease, according to one of two Minnesota Pollution Control Agency reports released Monday. Wisconsin’s lakes have not undergone similar scrutiny. Kate Golden/Wisconsin Center for Investigative Journalism

By 2011, Ferrey’s team had reported finding ethinylestradiol, a synthetic contraceptive hormone commonly taken by women, in the water downstream of Minnesota wastewater treatment plants about 40 percent of the time.

Wastes from these plants are full of these chemicals. Treatment systems were not designed to remove endocrine disruptors and other pollutants, like pharmaceuticals and personal care products, that are often referred to in the scientific literature as “contaminants of emerging concern.”

The Minnesota researchers also found chemicals upstream, which means treatment plants were not the only source.

Ferrey’s latest study is unusual because he selected the 50 lakes randomly, instead of choosing those most susceptible to contamination. Many had no direct influence from wastewater treatment plants, or even public access.

Other possible sources are agriculture, industry, urban stormwater runoff and near-shore development. Even airborne particulate matter is suspect; Ferrey believes that may be why trace amounts of cocaine contaminated a third of the lakes he examined.

But for many of the chemicals, the sources were unclear. Minnesota has plenty of pigs — but how carbadox, an antibiotic approved only for use on swine, got into 28 percent of the lakes was ultimately “perplexing,” Ferrey wrote. Many were nowhere near livestock facilities.

Hormones and other chemicals

The researchers found other hormones, too — progesterone, testosterone, and others. Most are produced naturally, by wildlife and people. One lake contained the synthetic hormone mestranol.

Common chemicals included nonylphenol, a breakdown product from detergents, agricultural and indoor pesticides, and cosmetics in 10 percent of the lakes. It acts like estrogen on lab animals, is “extremely toxic to aquatic organisms,” and has been found everywhere from groundwater to breast milk, according to the EPA. 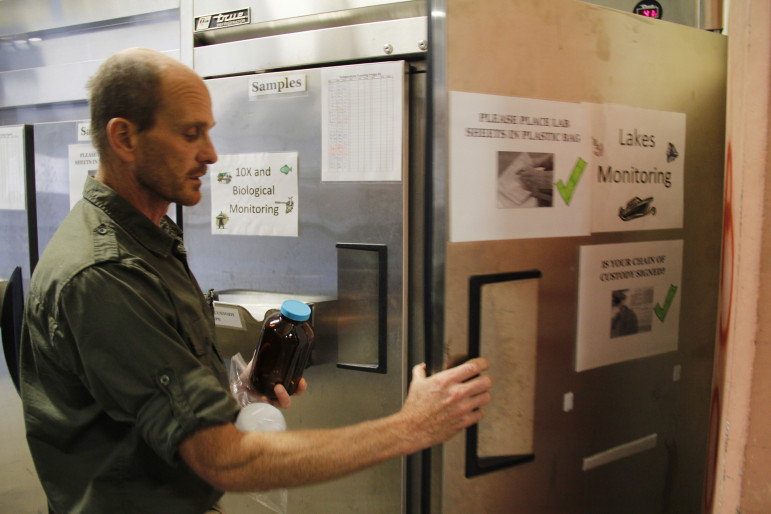 Researcher Mark Ferrey, at a Minnesota Pollution Control Agency warehouse in St. Paul, with a brown glass bottle used for lake samples. Ferrey has found a variety of chemicals in nearly all the lakes he has tested. Kate Golden/Wisconsin Center for Investigative Journalism

They found triclosan, an antibacterial chemical found in hand soaps, toothpastes and toys, in 14 percent of the lakes. It has disrupted estrogen metabolism and thyroid function in rats, can break down into dioxins in surface water, is in three-quarters of U.S. urine samples, and was deemed toxic to the environment by Canada last year.

BPA, found in 43 percent of the lakes, is “a reproductive, developmental and systemic toxicant in animal studies,” according to the EPA. It is being studied as a possible cause of early puberty in children.

BPA, hormones and nonylphenol were found “at concentrations that have been shown to impair endocrine function in fish and wildlife,” the researchers wrote.

Just because there are chemicals in the water does not mean they are hurting people or wildlife, including fish populations.

“It’s one thing to say it has an effect on an organism, quite another to say it’s having an effect on the entire ecosystem,” Ferrey said.

Yet signs are emerging that populations may be affected: Schoenfuss found that minnows exposed to chemicals were slower to swim away from predators.

Scientists often cite a landmark seven-year study conducted by Canadian researcher Karen Kidd, in which she intentionally tainted a research lake in Ontario with the synthetic hormone used in birth-control pills.

Among the resident fathead minnows, the males were feminized. The females kept producing  egg-yolk proteins beyond their breeding season.

The minnow population collapsed to near extinction.

Then some of the bigger fish, like lake trout, began to die off.

The fish rebounded only when Kidd stopped dosing the lake.

Kidd gave the lake estrogen in “environmentally relevant” concentrations, the same low levels that have been found in lakes and streams. 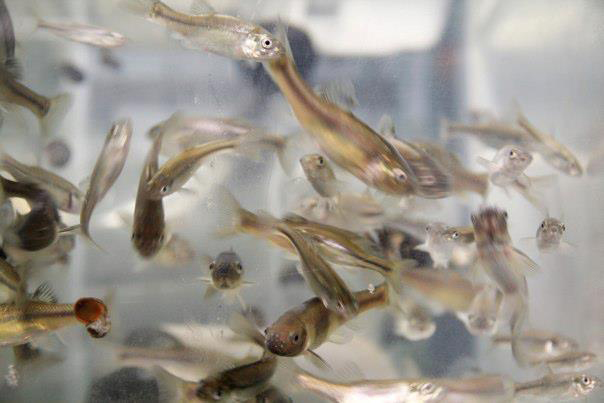 Only recently have scientists been able to detect these chemicals at such tiny concentrations.

The chemistry is so exacting that Ferrey had to pack his lake samples in ice and FedEx them to a specialized laboratory in Vancouver, Canada — at a few thousand dollars per sample — to find out what was in them.

Warren Porter, a professor of zoology at the University of Wisconsin-Madison, said the data raised serious issues.

Many of the chemicals are soluble in fat and not easily broken down, which could allow them to accumulate in the food chain, as DDT and PCBs do.

Their presence in surface water suggests that they may also reach the groundwater, an environment where they are less likely to degrade, Porter said.

The presence of chemicals that act like hormones or suppress the immune system, Porter said, could affect “normal neurological function, immune function, hormonal function and developmental processes which are sensitive to chemicals in the parts per trillion — which is what is being detected here.”

Some prominent experts have criticized the slew of science that is being done on these chemicals in such small concentrations.

Drinking water managers caution that merely detecting chemicals in water does not mean they are harming anyone. Health effects research has not kept pace with improvements in detection technology, noted the American Water Works Association in 2008 comments to the U.S. Environmental Protection Agency.

“National drinking water regulations should not be driven by the ‘contaminant du jour,’” wrote the nonprofit organization, which represents 4,700 utilities nationwide.

The chemical industry’s American Chemistry Council has funded research saying the case for widespread low-dose effects has been exaggerated and contrary evidence has been ignored.

Ferrey and other experts said parts per trillion is a relevant concentration in both fish and people, as the Canadian study showed. Ferrey uses the example of botulism toxins, which can kill people at even lower concentrations.

“It puts it in some perspective,” Ferrey said, “that we’re not talking crazy talk. We’re talking about concentrations that can be very powerful.”

Many scientists say that while trace amounts of a single chemical may not harm people or wildlife, most people are constantly exposed to a wide variety of chemicals whose cumulative impacts are not fully known but may pose risks.

A woman’s lifetime exposure to estrogens, for example, has been shown to increase her risk of breast cancer, said Angela Bauer, a professor of human biology at the University of Wisconsin-Green Bay.

Bauer and her collaborators found estrogenic chemicals in private well samples from northeastern Wisconsin in 2009.

The effective amounts were lower than those causing endocrine disruption in wildlife. But they were high enough to be worrisome, Bauer said, because they are likely not the only source of endocrine disruptors to which residents are being exposed over time.

“I think about this almost every day,” Bauer said.

3 thoughts on “The hunt for endocrine disruptors”