The Center was honored with two gold awards, four silver and two bronze in the club’s Awards for Excellence in Wisconsin Journalism, the state’s premiere all-media journalism competition. 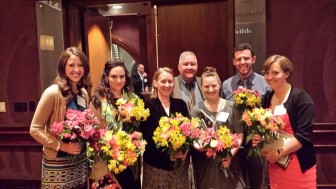 Wisconsin Center for Investigative Journalism staff and guests gather at the Milwaukee Press Club’s annual awards banquet on May 17, 2013.

Since 2010, the Center has received 17 awards in the contest.

“These awards demonstrate that our hard-working staff and interns, in collaboration with UW-Madison journalism classes and professional news organizations, are providing an important service to the people of Wisconsin,” said Andy Hall, the Center’s founder and executive director.

Hall noted that the award-winning work cast a light on key issues facing the state, such as rural population loss, the historic recall election survived by Gov. Scott Walker, veterans’ difficulties in finding jobs, slow cleanup of tainted industrial sites, opposition to a United Nation resolution that’s viewed as a threat to freedom, and gaps in campus mental health services.

One of the awards, a silver for best investigative story or series, was for Bennet Goldstein’s story on veterans’ employment difficulties. Goldstein reported the story for a class taught by journalism professor Deborah Blum, in collaboration with the Center. The Capital Times assisted in the editing, published the report and shared in the award for the story.

A team of journalism students led by former Center intern Amy Karon won a silver award for best multi-story coverage of a single feature topic or event — an investigation of gaps in mental health services at University of Wisconsin campuses.

The students won in professional, not student, contest categories.

“Students,” Hall said, “are producing some of the best investigative journalism in Wisconsin.”