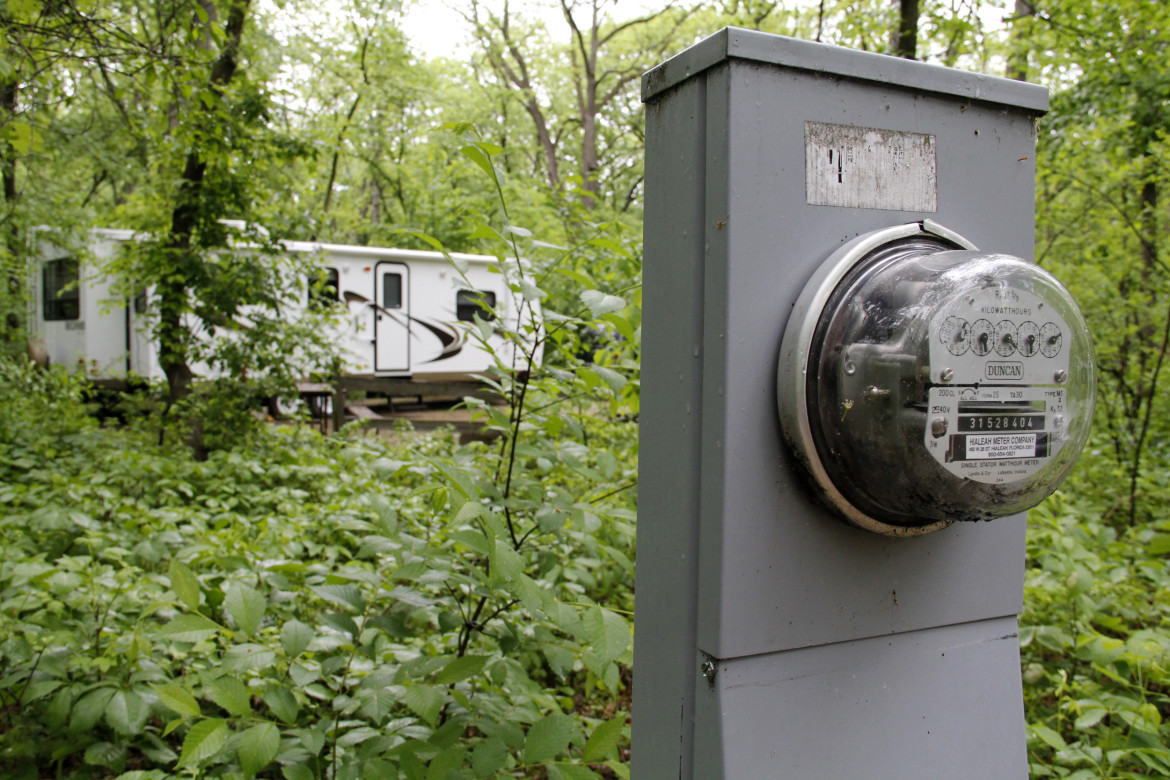 TODAY: This summer, Wisconsin’s state park campgrounds will complete the largest expansion of electric sites in decades — a response to growing demands from campers and to economic pressures.

JUNE 9: With budgets tight, Wisconsin state parks are increasingly relying on donated time and money from volunteer groups known as Friends of the Wisconsin State Parks. And a small number of popular parks are subsidizing dozens of money-losing properties.

“Our electric sites are always the first to go,” Hudson said. Though demand for rustic sites remains, “they’re not nearly as popular as the electric sites.”

Campers are demanding more technological comforts and increased electrical support. That is altering the nature of Wisconsin campgrounds, and changing how park leaders see their mission.

For power-loving campers, the arrival of this year’s Memorial Day weekend, and the unofficial start of the summer camping season, carries an extra spark of excitement: The largest electrification project for the park system in decades will be completed in early July.

In all, 18 state parks and forests will have added electrical sites or upgraded existing ones.

Work at some parks, including Roche-A-Cri in Adams County, Big Foot Beach in Lake Geneva and Kohler-Andrae near Sheboygan, is already complete. Work at Devil’s Lake near Baraboo and Peninsula in Door County is still in progress. 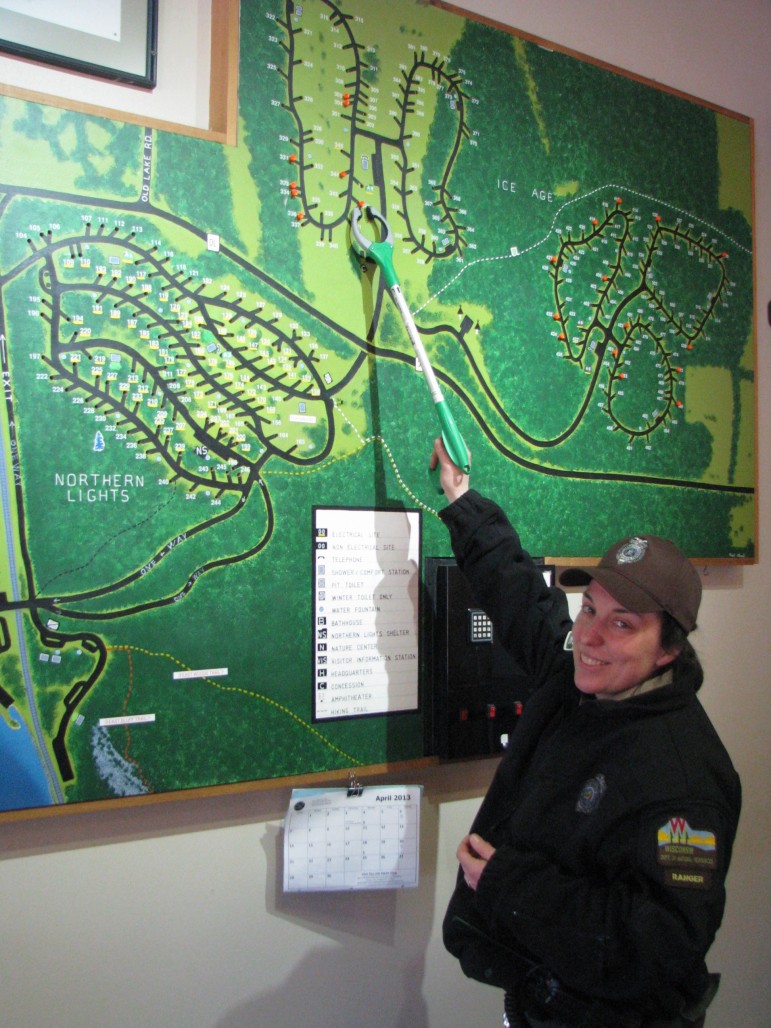 Dan Schuller, state park director for the Wisconsin Department of Natural Resources (DNR), said Wisconsin may be the only state in the country with statutory limits on how many state park campsites can have electrical access.

Wisconsin’s state parks have one of the lowest rates of improved campsites in the country, according to a 2012 report by the National Association of State Park Directors. In most states, more than 60 percent of campsites have access to electricity and plumbing in restroom facilities.

The current cap was set in 2009 after former state Rep. Mark Gottlieb, R-Port Washington, pushed for several years to raise the previous limit of 25 percent of sites having electricity.

Lori Severson, executive director of WACO, declined to be interviewed for this report. But association member Eric Anderson, owner of Sky High Camping Resort in Portage, said the state’s expansion of electrical represents a looming threat.

“I believe that any time (state parks) are adding more amenities to more of their campsites, it is detrimental to my business and private parks,” said Anderson, who testified against the first version of Gottlieb’s bill in 2005. Sky High Camping is located less than 20 miles from Devil’s Lake, the nearest state park.

Language raising the overall cap on electric sites finally made it into the 2009-11 state budget, after a compromise was reached to prohibit any park from having more than half of its sites be electric. 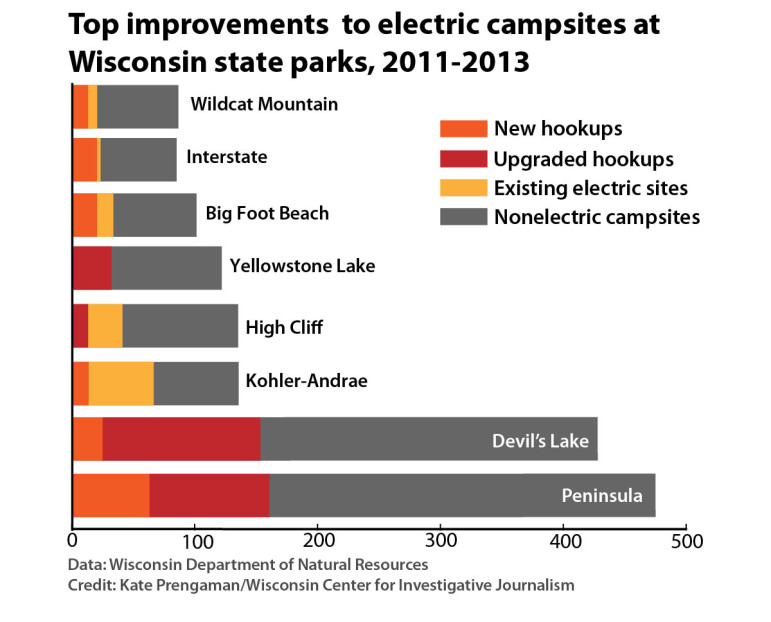 “The nature of camping, even at the state parks, has changed a little bit over the years,” said Gottlieb, now secretary of the state Department of Transportation. “Electricity at the campsite has become sort of an amenity that people expected.”

Parks amp it up

At Devil’s Lake, the project will add 24 new electric sites and upgrade electrical hookups at 129 more. The park has a total of 424 sites and is the state’s most-visited park drawing more than two million visitors annually.

“People are excited,” Hudson said, noting that the park has had problems meeting electrical demand on hot days, when campers in RVs cranked their air conditioners. “We were actually blowing circuit breakers.”

The upgrades will hike the capacity of the park’s electric campsites from 15 or 20 amps to as high as 50 amps.

Schuller, citing both anecdotes and hard data, said improved electrical access is “our No. 1 camper request. There’s no question about it.”

An electric hookup at Lake Kegonsa State Park, southeast of Madison, provides campers with 50 amp service. Statewide, many 15 amp hookups have been upgraded to 30 or 50 amp service. Kate Golden/Wisconsin Center for Investigative Journalism

The DNR factored in occupancy rates, demand, popularity, as well as age of existing facilities in deciding which parks to upgrade. Renovations were authorized for Peninsula, Devil’s Lake, High Cliff, Yellowstone Lake near Blanchardville, Wildcat Mountain in Vernon County and six other parks.

Not all campers like sharing parks with heavy users of electricity.

“I would prefer not to be (next to an RV),” said Indiana resident Nikola Karanovic, while peeling potatoes for dinner with friends around the campfire at Devil’s Lake. Karanovic wouldn’t like to be next to a satellite dish — such as those on some RVs — while he’s building a fire.

But Donna West, an avid camper from Green Bay who frequents Peninsula, supports the project.

“I feel for my parents who are older and have an RV, and it was really hard to get an electric site,” West said. “For people who want electric (sites), they’re rare.”

Last year, many Wisconsin state parks recorded occupancy rates above 60 percent from May to September. Throughout the state, electric campsites were consistently more heavily used than non-electric sites. Besides satisfying customer demand, electric campsites cost an additional $5 per site per night, generating additional revenue. Landon Williams, the comprehensive systems manager for the parks program, estimated the new and upgraded electrical sites will pay for themselves within two and a half years.

“We are about 75 percent supported by revenues from park users,” Schuller said. “And that has helped us buffer the ups and downs of economic times.”

During the recession, the DNR saw an increase in revenue from state parks, as campers looked for inexpensive vacations closer to home. “It’s a cheap weekend,” said Hudson, who has seen increased traffic at Devil’s Lake in the past few years.

Private campground owner Anderson said his business was hurt by the economic downturn. He argued that state parks, which already have some of the state’s best land and receive state subsidies, are eroding one of the private campgrounds’ remaining advantages — being able to offer the amenities people have at home.

“If they get in the mindset that they need to make more money, run it more business-like to try and become more self-sufficient, that kind of thinking is obvious competition,” Anderson said.

Schuller said state parks do not provide sewage or water hookups (though many offer a dump station for waste disposal from spring through fall), which minimizes competition with the private industry.

And when amenities are added, “We try to do that sensitively, so that we’re not directly competing with private industry.”

2 thoughts on “Campgrounds getting more electric”