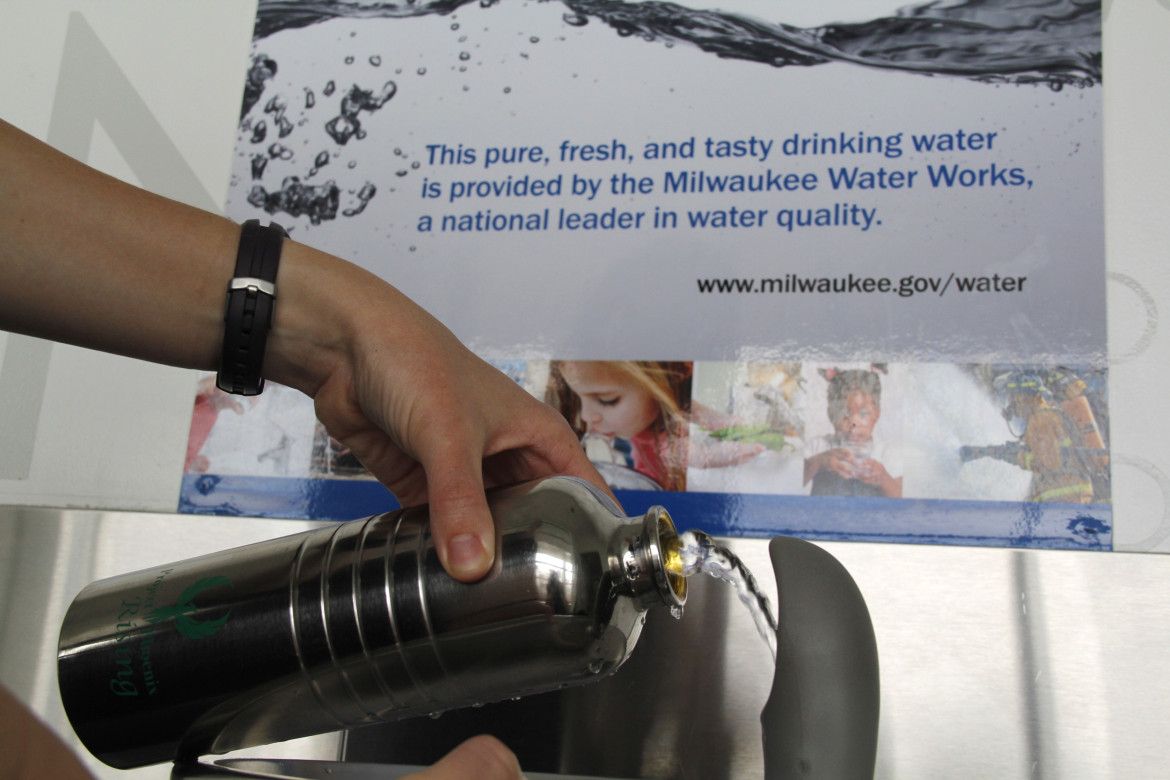 Two decades since a parasite in Milwaukee drinking water killed 69 people and sickened 400,000, the city has become a national leader in testing for unregulated contaminants. Kate Golden/Wisconsin Center for Investigative Journalism

Read more stories in the Center’s investigation of endocrine disruptors in the environment.

For the public officials who safeguard Milwaukee’s water, Cryptosporidium changed everything.

Two decades ago, the parasite passed through the city’s Howard Avenue water treatment plant and reached city taps. The outbreak resulted in an estimated 400,000 cases of gastrointestinal illness and at least 69 deaths.

It was the largest waterborne outbreak recorded in U.S. history.

Since the outbreak, the city’s water utility, which draws its supply from Lake Michigan, has invested $417 million in improvements to infrastructure, monitoring and treatment.

Some of these chemicals are endocrine disruptors, which can interfere with hormones and derail human and animal growth and development, even at extremely low doses.

“Our testing is a legacy from Cryptosporidium,” said Carrie Lewis, Milwaukee Water Works superintendent. The outbreak “made us realize that we were in the public health protection business.”

Contaminants get into water through storm runoff, industrial and agricultural discharges and sewage from homes, including medications that are flushed down the toilet or carried along in human waste.

In 2012, none of these chemicals was detected. Both years, chloroform and other regulated byproducts of the water disinfection process were found well below allowable concentrations.

“I don’t think there’s any documented public health significance or importance that has been tied to the detection of these compounds,” said Lon Couillard, Milwaukee Water Works’ water quality manager, of the unregulated chemicals.

The utility’s website echoes that view: “Science has not demonstrated any impact on human health at the trace levels these contaminants are being discovered.”

Couillard said year-to-year shifts in emerging contaminant levels are not likely to be significant, given the potential for errors while testing at the very low concentrations their laboratories must use.

Establishing a baseline and monitoring the data over many years is important to understanding which contaminants might be considered a risk, Couillard said.

Lee Boushon, chief of the Wisconsin Department of Natural Resources’ public water supply section, said the vast majority of water systems focus only on a standard list of 91 contaminants regulated by the U.S. Environmental Protection Agency.

“It’s certainly forward-looking for Milwaukee to monitor for additional contaminants beyond that list,” Boushon said. 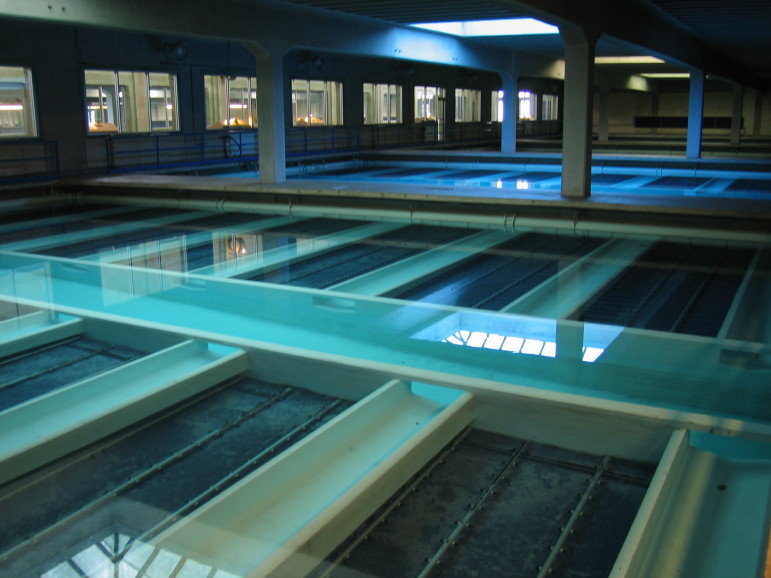 Since the Cryptosporidium outbreak of 1993, Milwaukee has made numerous improvements to its drinking water treatment. An $11 million project extended the Howard Avenue water intake 4,200 feet to a distance of two miles off Lake Michigan’s shoreline, beyond the path of contamination from the city’s industrial harbor.

As the lake water rushes into the plant, it enters a nine-step treatment process that includes disinfection with bubbling ozone gas, sedimentation and filtration. It is then deemed “pure, safe and delicious” by Water Works.

At the other end of the city’s water system, the Milwaukee Metropolitan Sewerage District tested a state-of-the-art sewage filtration system. The goal was to catch emerging contaminants resistant to removal by conventional wastewater treatment along with phosphorus, a nutrient that contributes to algae blooms and fish kills.

A science in its infancy

But while technology has evolved to detect emerging contaminants in water at increasingly tiny concentrations, water managers across the nation still do not have good answers for the public on how much risk they pose to human health or the environment.

Most of the 80,000 chemicals in commercial use have not been tested for safety, according to the Pew Charitable Trusts.

“There is mounting concern across the U.S. about the impact of trace organics, such as hormones and pharmaceuticals, in our water systems and the potential threats they pose to human health, wildlife and the environment,” said Rebecca Klaper, associate professor at the University of Wisconsin-Milwaukee’s School of Freshwater Sciences, in a press release on the sewerage district’s filtration study.

Exposure to these chemicals has been associated with changes in sexual behavior, population declines, early or late puberty and malformed reproductive organs in animals.

But the explosive growth in production of endocrine disruptors, their almost universal presence in air, water and soil, and the variety and complexity of potential impacts, make studying health effects in humans an overwhelming challenge.

“If you listed every chemical that binds to hormone receptors and can cause an effect, there would be hundreds of them,” said Jocelyn Hemming, an environmental toxicologist with the Wisconsin State Lab of Hygiene. “It’s unbelievable how many compounds act that way.”

Tim Bate, the sewerage district’s director of sustainability and planning, said most wastewater treatment plants are not equipped to handle endocrine disruptors, pharmaceuticals and other chemicals of emerging concern.

They generally pass “right through into the aquatic environment, and it affects aquatic organisms,” Bate said.  “I think that’s going to be bigger and bigger going forward.”

The sewerage district’s pilot study found that the new filtration system could remove an average of 75 percent of the 10 emerging contaminants examined, while also reducing concentrations of phosphorus.

The study was released last fall by the Milwaukee Metropolitan Sewerage District and Veolia, the French company that operates and maintains Milwaukee’s sewage treatment facilities.

Using its activated charcoal filtration system, known as Actiflo Carb, the company tested for the removal of chemicals including mood stabilizing drugs, disinfectants, antibiotics and blood pressure medications. They were chosen based on previous research showing they were difficult to remove with conventional sewage treatment.

Among those chemicals was triclosan, a germ-killing compound used in hand soaps, toothpastes, and detergents. The chemical, currently under review by the U.S. Food and Drug Administration, is known to disrupt hormones in fish, frogs and rats and potentially create widespread resistance to antibiotics. And when combined with chlorinated water and sunlight, triclosan may break down into dioxins, which can be highly toxic.

The new filtration process was able to remove around 90 percent of triclosan from wastewater.

Sewerage district officials said that while the pilot system is promising, they are not ready to invest in scaling it up, especially for the removal of unregulated contaminants.

“We need to be careful that we check out all the emerging technologies,” said Bill Graffin, public information officer for the Milwaukee sewerage district.  “Sure we got great results, but what if something better comes out tomorrow?” 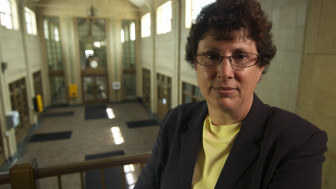 At Milwaukee’s Water Works,  Lewis worries about how to communicate with the public about emerging contaminants, given the uncertain science regarding the trace levels being detected.

“It’s hard for people to understand when we have to say the science isn’t there to tell us what this means,” she said. “The hope is that the data we’ve collected will help in figuring this out.”

Some argue the science is already pointing toward real risk.

Linda Birnbaum, director of the National Institute of Environmental Health Sciences, testified before a 2010 congressional committee that scientists are observing a growing list of endocrine-sensitive health outcomes. Increases in breast and prostate cancer, ectopic pregnancy, undescended testicles and early puberty are all reasons to be concerned about exposure to endocrine disruptors, she said.

In her testimony, Birnbaum also cautioned that small disruptions of the endocrine system — which is responsive to subtle changes in hormones — by low-level chemical exposures like those in water, may have negative health effects.

Other experts agreed the chemicals are worrisome, but said drinking water is not likely a big risk.

“From the data that I am aware of, I have seen no evidence of risk from the concentrations of pharmaceuticals occurring in drinking water,” Shane Snyder, professor of chemical and environmental engineering at the University of Arizona, said in an interview.

Snyder, like Klaper, said people probably get more exposure to these chemicals from common household products like perfumes, shampoos and flame retardants.

“Consider that the highest concentration of any pharmaceutical we detected in U.S. drinking waters is approximately 5 million times lower than the therapeutic dose,” Snyder told a Senate committee in 2008, representing the American Water Works Association, a professional organization that includes water treatment plant managers.

In the interview, Snyder noted that current scientific evidence is limited in part because studies don’t assess the mixtures of chemicals that occur in water.

“The vast majority of our regulations are based upon assessment of one chemical in isolation,” Snyder said. “We need a better way to look at water from a mixture perspective.” 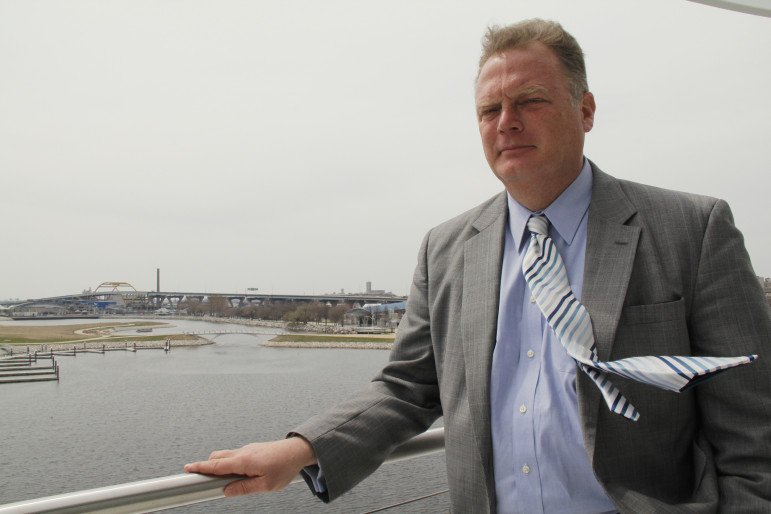 Kevin Shafer, executive director of the Milwaukee Metropolitan Sewerage District, said that changing, growing pharmaceutical use will force his industry to adapt. “We’re going to have to do that eventually, so we might as well get started now,” he says. Kate Golden/Wisconsin Center for Investigative Journalism

Prevention is better than cure

Kevin Shafer, executive director of Milwaukee’s sewerage district, agreed that filtering out bad stuff from the water supply is important. But even better, he said, is to keep it out of the water system in the first place.

He noted the city’s success at creating a prescription medication disposal program to avoid water contamination. “We’ve collected tons and tons of medicines and gotten them out of the environment,” Shafer said.

Klaper said she is encouraged by the trend toward green chemistry, in which potential health or environmental consequences are accounted for during chemical design.

Twenty years ago, state and federal regulations in place at the time were not sufficient to stop the Cryptosporidium outbreak in Milwaukee. Now, scientific organizations and advocacy groups are calling for taking a more precautionary approach to contaminants like endocrine disruptors.

Organizations such as the Endocrine Society have called for more research, and stronger regulation to reduce exposures to endocrine disruptors.

Some are pushing to update and strengthen chemical legislation.

In the meantime, Lewis, the Milwaukee Water Works superintendent, said the city will continue its aggressive monitoring of unregulated contaminants.

“We think it’s our public health responsibility to know what’s in the water,” she said.