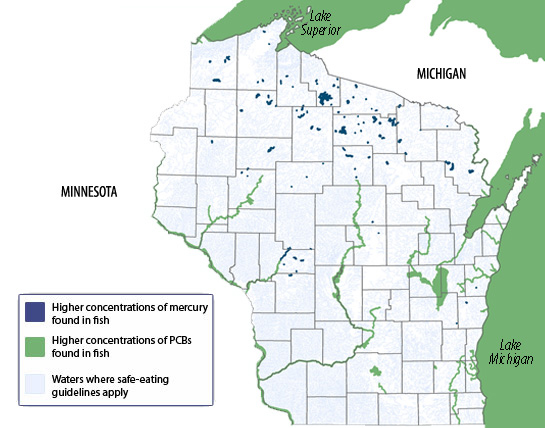 Concerns grow about hormone-disrupting chemicals in Wisconsin waters The state lags behind Minnesota in testing its lakes and rivers.

Wisconsin’s Department of Natural Resources and Department of Health Services warn residents to limit their consumption of wild fish to prevent possible health problems from chemical contamination, as do many other states.

Those problems include a range of health effects, but the four groups of chemicals that trigger consumption advisories — PCBs, mercury, dioxins and PFOS (perfluorooctane sulfate) — have been associated with endocrine disruption, DNR toxicologist Candy Schrank confirmed.

Most fish contain at least low levels of mercury, while the other three chemicals are of most concern at specific locations.

Mercury: A natural element that is mobilized and emitted into the air via combustion and other activities. Mercury has been shown to affect the cognitive thinking, memory, attention, language, fine motor skills and visual spatial skills of children exposed in the womb. It can reduce fertility in people and have other reproductive effects, and is associated with nervous system effects in adults. Most people have blood mercury levels below that which is associated with possible health effects.

PCBs: A group of very persistent chlorinated chemicals that build up in the body over years. Researchers saw developmental disorders and cognitive deficits in the children of Michigan mothers who ate moderate to high amounts of fish before and during pregnancy. By 11, these children were three times more likely to have low verbal IQ scores, twice as likely to lag behind at least two years in reading comprehension, and had more difficulty paying attention. Hormones may be the mechanism for these effects, even though they are not usually thought of as endocrine-related. PCB health effects of concern to adults include diabetes and thyroid disorders, both of which are endocrine-related.

EPA: Most people have dioxin levels that are “uncomfortably close to levels that can cause subtle adverse non-cancer effects.”

Dioxins: A family of toxic chemicals that are byproducts from combustion and industrial chemical processes. The state advises not to eat fish when samples exceed 10 parts per trillion; this means no carp or big catfish from the Wisconsin River. Most people have detectable levels of dioxins at levels that are “likely to result in an increased risk of cancer and is uncomfortably close to levels that can cause subtle adverse non-cancer effects,” the U.S. Environmental Protection Agency says. Non-cancer effects include changes in hormone systems, altered fetal development, reduced fertility, and less resistance to disease. Triclosan, a common hand soap ingredient, has been found to break down into dioxins.

PFOS: One of several perfluorinated chemicals made for firefighting foams, paper, pesticides, cleaning products, textiles and other industrial uses. PFOS has been shown to affect the neuroendocrine system and lead to tumors in rats’ livers; rodent studies have also raised concerns about developmental and reproductive effects. Human studies have been limited, however.

DNR can test fish for chemicals it suspects are present and will build up in fish. The agency works with Department of Health Services toxicologists to evaluate whether the chemicals appear to pose a risk to people or wildlife. The agency is also working with EPA’s Great Lakes Fish Monitoring and Surveillance Program to screen fish for chemicals of emerging concern, such as the flame retardants known as PBDEs that may be endocrine disruptors.