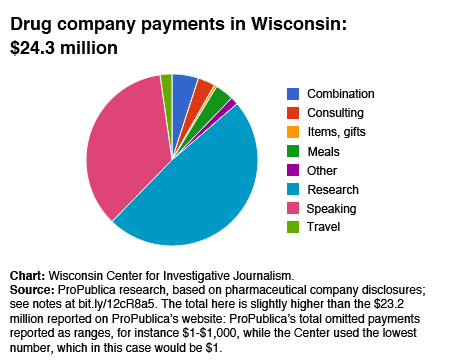 Static version of the interactive chart for the April 2, 2013, column.

Chart: Wisconsin Center for Investigative Journalism. Source: ProPublica research, based on pharmaceutical company disclosures; see data notes at Dollars for Docs. The total here is slightly higher than the $23.2 million reported on ProPublica’s website: ProPublica’s total omitted payments reported as ranges, for instance $1 – $1,000, while the Center used the lowest number, which in this case would be $1.

Journalist Steven Brill, in his recent 24,000-word Time magazine article on how the U.S. medical establishment is fleecing consumers, touted a database run by ProPublica, the Pulitzer Prize-winning nonprofit newsroom.

This database, Dollars for Docs, logs payments from pharmaceutical companies to health professionals. Critics say this encourages recipients to use and recommend the products of these companies, with health insurers and consumers picking up the tab.

Updated in March, the database now itemizes $2 billion in payments from 2009 through 2012.

The actual total is much higher. The database only includes payments from the 15 drug companies — about half the U.S. market in sales — that disclose this information. And some have not reported all four years. (New rules will require industry-wide disclosure by September 2014.)

While the site lets anyone do simple searches, a subset of state data provided to the Wisconsin Center for Investigative Journalism allowed for more detailed analysis.

In all, more than $24 million has gone to Wisconsin health professionals since 2009. Eli Lilly and Pfizer each spent about $6 million, followed by Merck and AstraZeneca at about $3 million.

Three-quarters of the nearly 21,000 individual outlays were for meals. The largest expense category, at about $12 million, was for research.

Rick Abrams, CEO of the Wisconsin Medical Society, calls drug-company spending on research “really important” to the cause of medicine, especially now that federal spending is being pinched.

But Wisconsin providers also received about $9 million for speaking fees, and about $1 million in meals and gifts. The Medical Society advises: “Physicians shall accept no gifts from any provider of products that they prescribe to their patients.” Its non-binding rules also direct physicians to not speak on behalf of health product companies.

Abrams says physicians who accept gifts or speaking fees appear to be violating this rule, but cautions that “the specifics” of each case should be taken into account.

Finding recipients willing to discuss specifics is not easy.

A half-dozen Wisconsin practitioners listed in the database passed up opportunities to comment. These include Todd Mahr, a pediatric allergist and immunologist in La Crosse (roughly $370,000 since 2009), lipidologist Tara Dall of Delafield ($260,000) and family practitioner Daniel Duffy of Cedarburg ($250,000). Most of these payments were for speaking and educational forums.

Mutsumi Ishii, a Sun Prairie psychiatrist who’s received more than $350,000 from nine different drug companies, also did not respond. But a spokeswoman for Dean Clinic, where Ishii works, said clear rules prohibit the acceptance of anything “in exchange for prescribing drugs or other products” or that could be seen as interfering with patient care.

Bhupendra Khatri, a Milwaukee neurologist who specializes in multiple sclerosis, defends the $240,000 he’s gotten from drug companies since 2009, mostly for speaking.

“We work for it,” Khatri says. “We take time off from our clinic and time off from our family” to travel to speak. He says the large number of new MS drugs make this education needed, and insists there’s no favoritism toward certain companies: “We prescribe everything that’s available.”

Khatri and Barry Gidal, a professor at the University of Wisconsin-Madison School of Pharmacy, stress that drug talks are highly regulated by the U.S. Food and Drug Administration.

“You can’t just go out and say whatever you want,” says Gidal, who has been paid $110,000 since 2009 by two drug companies for speaking and consulting. Gidal, not a prescribing physician, says he is performing a useful educational role in sharing his expertise on the “extremely complicated” drugs used to treat epilepsy.

And while Gidal supports full disclosure of these payments, he says it’s unfair to conclude that a practitioner who accepts them is doing something wrong.

“The pharmaceutical companies,” he argues, “do play a valuable role in our health care system.”