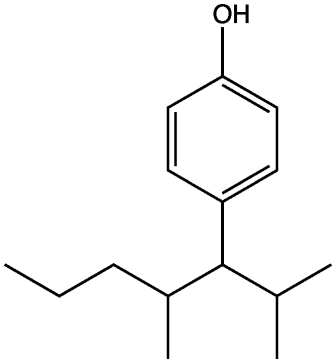 The chemical structure for nonylphenol.

Read more from the Center’s investigation on endocrine disruptors in the environment.

Concerns grow about hormone-disrupting chemicals in Wisconsin waters The state lags behind Minnesota in testing its waters.

Nonylphenol is a breakdown product of a chemical family used in industrial laundry detergents, in crop spraying, as a stabilizer in plastic food packaging, in cosmetics and many other products. It is “highly toxic” to fish and aquatic organisms. It has been found “in human breast milk, blood and urine and is associated with reproductive and developmental effects in rodents,” according to the EPA, which has concerns about risks to people, especially children, and plans to phase it out. It is toxic to aquatic organisms at milligrams per liter; the U.S. demand was estimated at 380 million pounds in 2010. Nonylphenol was found in most of the wastewater treatment plant effluent Minnesota tested, about half of the downstream samples and a third of the upstream samples. More troubling, it often appeared at a higher concentration in sediments than water, whether upstream or down — suggesting that it may accumulate rather than breaking down.

Bisphenol A (BPA), invented as an estrogen replacement but used in plastics and epoxy resins, with a U.S. volume of 2.4 billion pounds in 2007, was commonly found. Brown trout given very low doses had delayed ovulation and lower-quality sperm. It has been associated with intersex fish. One major concern is that a brief low-dose exposure at certain sensitive developmental stages may cause effects much later in an animal’s life cycle. Another is that exposed organisms’ offspring may be affected. It may affect organisms at parts per trillion, and last year releases exceeded 1 million pounds. Most people appear to get their biggest BPA exposures through food packaging, EPA says. In 2000, the U.S. Geological Survey sampled untreated groundwater used as drinking water, focusing on areas susceptible to contamination, and found BPA one fifth of the time. The National Institute of Environmental Health Sciences is studying potential human health effects including “behavior, obesity, diabetes, reproductive disorders, development of prostate, breast and uterine cancer, asthma, cardiovascular diseases and transgenerational or epigenetic effects.”

One thought on “Profiles: Chemicals in the water”