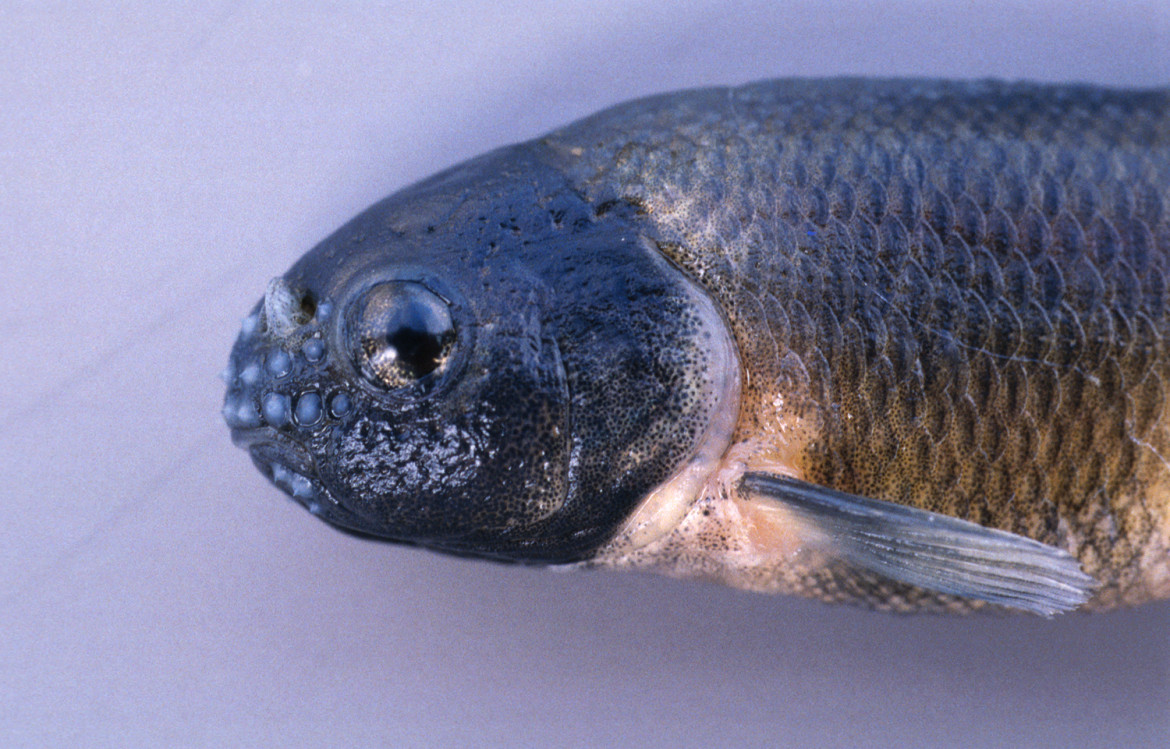 The male fathead minnow's fat pad and pimple-like bumps, called tubercules, will shrink if he is exposed to estrogen. Fathead minnows, sold in Wisconsin bait shops and swimming in its waters, are a key species for research on endocrine disruption.

Read more from the Center’s investigation on endocrine disruptors in the environment.

Concerns grow about hormone-disrupting chemicals in Wisconsin waters The state lags behind Minnesota in testing its lakes and rivers.

The fathead minnow is a common, dull gray baitfish, but it has acquired an outsize importance for researchers studying endocrine disruption. This little fish is to aquatic toxicology what mice and rats are to drug trials.

Minnesota researchers used it recently to explore the effects of exposure to the effluent streams from wastewater treatment plants.

Extrapolating is not ideal. Fish get a lot more exposure to polluted water than people. They live in the water, while we just drink or swim in it.

And these experiments cannot be done on people.

Luckily, the endocrine systems of fish and people are fundamentally similar, said Dalma Martinovic-Weigelt, a researcher at the University of St. Thomas, in St. Paul, who coauthored the study.

“If a chemical can affect hormones in fish, usually that chemical will also affect those same systems in humans,” Martinovic said.

Normally the female fathead minnow sticks a few hundred eggs to the underside of a ledge, then considers the job done. The male does all the work of guarding the eggs. He rubs the eggs against the fat pad and pimple-like bumps on his head, maybe to keep them clean. The bumps are secondary sex characteristics, like hairy armpits on humans.

But fathead minnows are vulnerable to chemicals. Expose a female to testosterone and she’ll start developing a fat pad. Add estrogenic chemicals to the male’s water, and his bumps shrink.

Other changes are less obvious. He may not take such good care of his nest. He is not as competitive or aggressive toward other males. His testes will not develop, and he will produce less sperm.

Or he may be slower to swim away from predators.

Martinovic and her collaborators found that male minnows exposed to wastewater treatment plant effluent acted like they’d been exposed to estrogens.

The males managed to mate if other males were not around. But if they had to compete with the control males, however, they “suffered nearly total reproductive failure”: They had no game. Probably, the researchers hypothesized, due to their behavioral changes.

In another study, Martinovic and colleagues ground up exposed minnows’ livers and purified the genetic material in them to measure how exposure might have affected the activation of thousands of genes.

They found that changes in gene expression followed the chemical composition of the effluents. The more stuff in the water, the more genes were affected. And the affected genes were those involved in reproduction and immune systems.

At some sites, Martinovic said, she saw a big difference between upstream and downstream effects.

In others, especially those already polluted upstream, she saw less of a difference.

To Martinovic, that meant the effluent was not the only source of chemicals. In other words, she said, “we have a problem to begin with — and we’re just adding to that problem.”