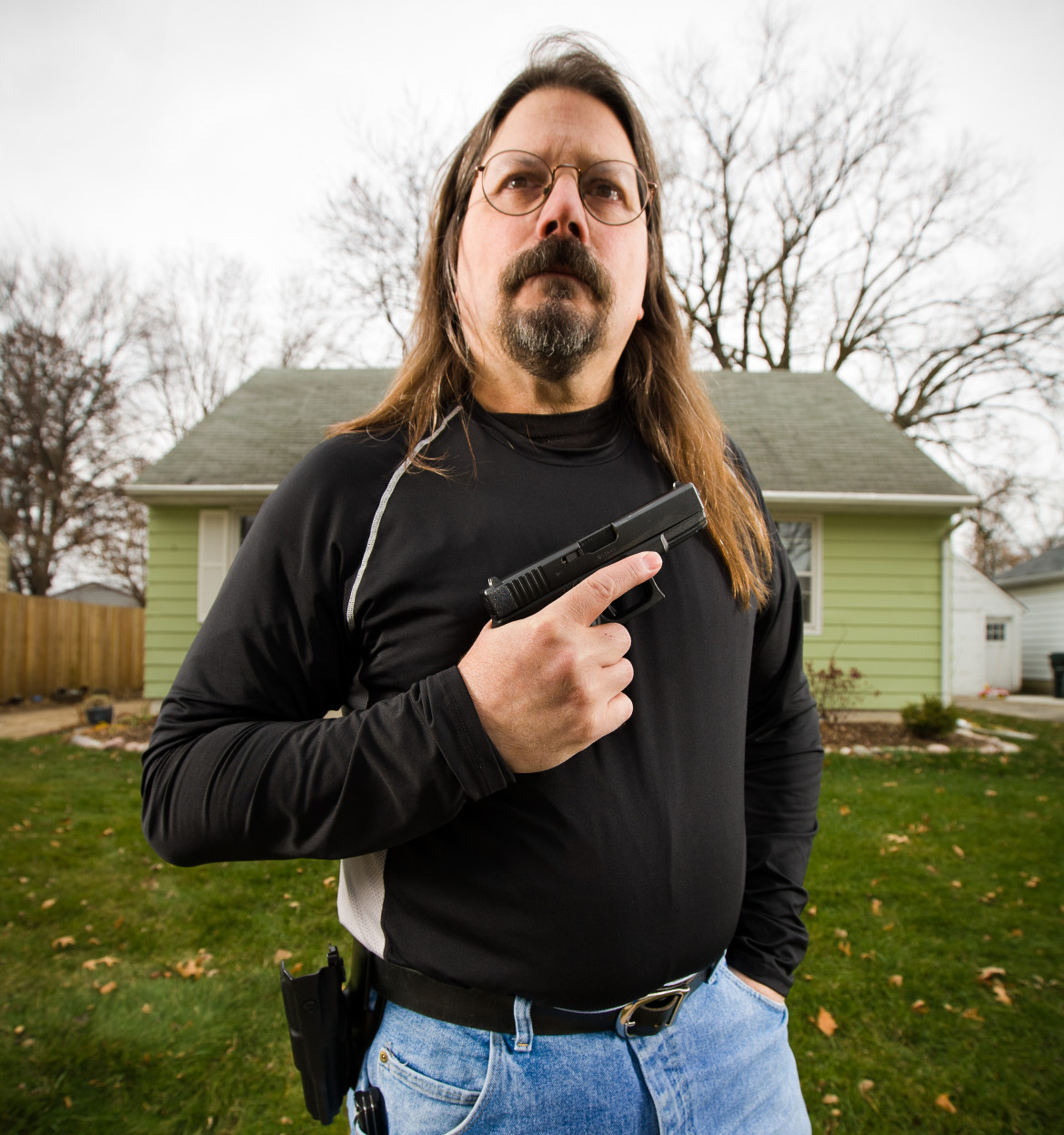 More than 4,000 applicants were denied a Wisconsin concealed carry license and more than 400 had their licenses revoked or suspended in the program’s first 14 months, records show. These included dozens of felons, domestic abusers, illegal drug users and “fugitives from justice.”

This story is a part of our Sunshine Week coverage.Sunshine Week, March 10-16, 2013, is a national initiative to promote a dialogue about the importance of open government and freedom of information.TODAY: State weapons law conceals informationDay 2: State agency lags on records compliance

Click the chart below to track concealed carry license denials in the past year. 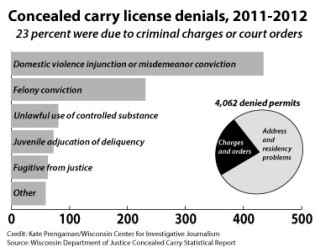 Who were these lawbreakers?

The state’s lips are sealed.

“The Department of Justice is not able to provide the records that you have requested because they are not accessible under law,” wrote Assistant Attorney General Kevin Potter, in response to a request for the applications from felons, fugitives and others who were denied licenses.

The DOJ does produce annual reports listing the number of applications, denials and other information. The reports from the last two months of 2011 and all of calendar year 2012 show that of the 167,000 applications received, 4,062 were denied.

Most of these denials were for non-criminal reasons, such as the applicant’s address not matching other state records. But the denied applicants included 232 convicted felons, 435 people with a domestic abuse conviction or injunction, 81 illegal drug users and 64 fugitives.

DOJ spokeswoman Dana Brueck said fugitives from justice who apply for concealed carry licenses are “referred to law enforcement.” The agency does not have the authority to track why an applicant is deemed a fugitive or the outcome of these referrals.

Wisconsin’s concealed carry law shields the release of most data regarding license applicants and holders. The only exceptions are the DOJ’s bare-bones annual report and the prosecution of an offense “in which the person’s status as a licensee … is relevant.”

Potter said this might include the prosecution of a person caught carrying without a license. The DOJ, he added, “would not be authorized” to track instances where this has occurred.

The department maintains a database of concealed carry license holders but access to it is strictly limited. Even law enforcement officers could not routinely check, say, whether a person they are stopping in connection with a violent crime has a license to carry. 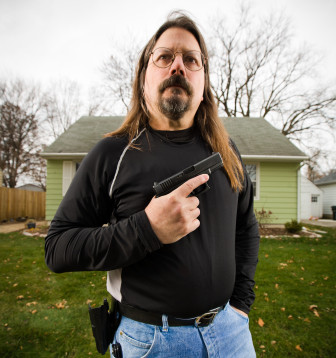 Auric Gold, secretary of Wisconsin Carry Inc., a nonprofit group that advocates for gun-owners rights, is not troubled by the lack of information about licensee holders and applicants.

He noted that the Texas Department of Public Safety found that, in 2011, only 120 of that state’s 524,000 concealed carry licensees in the state were convicted of any crime that year, and cited articles indicating similar low levels of misbehavior by license holders in other states.

“People who have concealed carry licenses are far less likely to commit crimes than the general population,” Gold said. “I’m not aware of any study that has contradicted this conclusion.”

Jeri Bonavia, executive director of Wisconsin Anti-Violence Effort, a statewide advocacy group that focuses on gun-violence prevention, said the confidential rules are designed to keep such assertions from being truth-tested against the state’s experience.

“There’s no way of knowing whether what proponents of the law are saying is true or not,” Bonavia said. “I think this was intentional.”

With the passage of its law in June 2011, Wisconsin became the 49th state to let citizens possess concealed weapons. (The remaining holdout is Illinois, where a concealed carry bill is pending.)

The National Rifle Association has hailed Wisconsin’s law as “one of the nation’s strongest.”

Bonavia said its restrictions on information reflect that: “The pro-gun lobby has made sure that the more recent bills have had a secrecy provision.”

According to the Law Center to Prevent Gun Violence, a San Francisco nonprofit group, almost all concealed-carry states now have confidentiality provisions in place. New York joined this club in January, after a newspaper there published the names of licensees. The same thing happened in Florida in 2005 and Virginia in 2007 after news media in those states published databases of concealed carry licensees.

Bonavia stressed that her group does not want individual names to be made public. It just wants to enable law enforcement or researchers to “do an analysis that lets us know whether or not this has been a good public policy.”

Kristen Rand, legislative director of the Violence Policy Center, a nonprofit advocacy group based in Washington, D.C., agrees research can be done using data that is “totally aggregated, with no personal information.”

For instance, the state of Michigan protects the confidentiality of individual license holders but produces annual reports tracking criminal charges against them. The latest report, for the year ending June 30, 2011, tallied more than 2,700 total charges, including 328 for “brandishing or use of pistol.”

Rand credited the gun lobby for the fact that most states, Wisconsin included, prevent any such analysis. “Information is their enemy,” she charged. “They do everything possible to foreclose access to information.”

The NRA, which helped write and worked to pass Wisconsin’s concealed carry law, did not respond to a detailed request for comment.

Between 1998 and 2002, Rand’s group used data then available in Texas to produce a series of reports titled “License to Kill,” detailing arrests of license holders there. The last report listed more than 5,000 arrests going back to 1996, including 41 for murder or attempted murder, 79 for rape or sexual assault, and 833 for assault.

The Texas State Rifle Association objected, saying this represented a “minute percentage” of concealed carry holders. In 2007, the state shut off public access to this information.

So absolute that DOJ officials are forbidden to reveal whether Wade Michael Page, who last August murdered six people at a Sikh temple in Oak Creek before taking his own life, was licensed to carry. Page’s prior convictions for impaired driving and criminal mischief, both misdemeanors, would not have disqualified him.

Even a criminal conviction for carrying a concealed weapon without a license, a misdemeanor, would not necessarily bar a person from obtaining one legally or force revocation of an existing license. To have this consequence, it must be a felony conviction or a misdemeanor conviction for domestic violence, among a few other disqualifiers.

“Theoretically, a person could have a lot of misdemeanors but not be disqualified,” Gold said.

Of the 167,000 applications (including some resubmitted after being returned), the state granted 149,000 licenses through the end of last year. Of these, 432 were subsequently revoked or suspended, according to the annual reports. The most common reason for revocation was “no longer a Wisconsin resident.”

There were also 36 revocations for unlawful use of a controlled substance, 29 for felony convictions, 50 for misdemeanor convictions or injunctions related to domestic violence, and nine for involuntary commitment to a mental institution.

All 102 suspensions that occurred in 2011 and 2012 were imposed as a temporary bond condition.

But the Justice Department is not allowed to release identifying information on these offenders. In most cases, the only way state residents would learn of misbehavior by individually identified concealed carry licensees is if this comes out anecdotally. This has happened on several occasions.

Jeffrey Albrecht, the village president of Silver Lake, in Kenosha County, was arrested following an incident on March 30, 2012, in which he got into a spat with another man at a restaurant. He was carrying a gun and produced a concealed carry license; police determined that he was intoxicated.

Albrecht pleaded no contest to non-criminal disorderly conduct and was fined $515. The state’s concealed carry law prohibits licensees from carrying a gun while drinking in an establishment that serves alcohol. But Albrecht’s transgression, even if it had resulted in a misdemeanor conviction, would not have triggered revocation of his concealed carry license.

On Jan. 4 of this year, Michael Bukosky of Oconomowoc was arrested in Waukesha after he allegedly pointed a gun at another driver who had cut him off, saying “That’s right — don’t (expletive) around in a concealed carry state.”

Bukosky was charged with pointing a firearm at another person, a misdemeanor. His case is pending.

If Bukosky has a concealed carry license, which cannot be disclosed, being convicted of this crime will not result in revocation, unless a ban on firearm possession is imposed as a condition of bail or probation. Bukosky was released on a $750 signature bond with no such condition, court records show.

Another case in point

On Nov. 22, 2011, police were called to a home in the village of Caledonia, in Racine County, where a dispute erupted between two brothers over a package of cigarettes. It led to a standoff in which one brother was armed with a five-foot sword, the other a .40 caliber pistol.

The pistol bearer, Michael Yocco, told police he had a concealed carry license, according to a news account. Yocco, now 29, was charged with felony burglary in 2001 but avoided a conviction due to a deferred prosecution agreement, so he was legally able to obtain a license.

Caledonia police were quoted as saying that Yocco could lose his license as a result of this incident, because it involved domestic violence. But that didn’t happen, because only his brother Christopher was charged, with misdemeanor disorderly conduct.

“The Racine County District Attorney decided not to file charges against Michael Yocco in this case,” said Caledonia Police Sgt. Brian Wall. “As a result, there was no revocation or suspension” of his concealed carry license.

Six months later, in May 2012, Yocco was arrested in Chicago while protesting a NATO Summit there. Police said he and another man were wearing militia outfits and flying anarchist flags from Yocco’s car, which was found to contain “several spring-loaded knives, a gas mask and a bag containing a large amount of ammunition,” according to a report in the Chicago Sun-Times.

Yocco was charged with carrying a dangerous weapon, unlawful use of a weapon and possession of ammunition without a Firearm Owner’s Identification card. In December he was found not guilty on all counts, a Cook County court official said.

But even if Yocco had been convicted, it would not have resulted in the loss of his Wisconsin concealed carry license, as the charges were all misdemeanors.