What did Mike Huebsch, secretary of the state Department of Administration, know about the circumstances under which a key DOA official abruptly resigned?

That’s what Milwaukee Journal Sentinel reporter Jason Stein was wondering when he put in a request, under the state’s open records law, for emails and text messages sent or received by Huebsch regarding deputy secretary Cindy Archer, around the time of her departure.

This story is a part of our Sunshine Week coverage.Sunshine Week, March 10-16, 2013, is a national initiative to promote a dialogue about the importance of open government and freedom of information.

Click the chart below to view an analysis of open records requests received by the DOA. 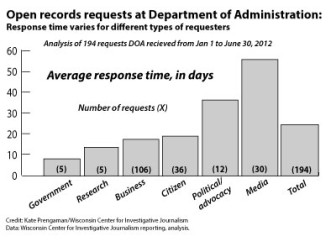 Archer quit her job in August 2011. A month later, the FBI raided her Madison home, amid a secret John Doe probe into alleged illegal activity during Gov. Scott Walker’s stint as Milwaukee County executive, when Archer was his top aide.

Stein largely forgot about the request until the DOA came to him late last year, asking if he still wanted the records, after so much time. He did. When he saw how few records were produced, the veteran Capitol reporter was “perplexed” by the long delay, but not completely surprised.

“It has been my impression that, under different administrations, DOA has seemed to take longer to fill requests than other agencies,” Stein said.

Other reporters agree that DOA tends to lag in its handling of records requests.

“We’ve had a lot of delays,” said Kirsten Adshead, a journalist with the Wisconsin Reporter, a nonprofit news outlet affiliated with the conservative Franklin Center for Government and Public Integrity. “If we put in a request to DOA, we know it’s going to take longer to get that information.”

Adshead said these delays are especially frustrating, since DOA performs such critical functions.

“It’s really the governor’s right-hand agency,” she said. “If you want information on state contracts, or Capitol police, or about how tax dollars are spent, you have to go to DOA.”

To assess the DOA’s performance, the Wisconsin Center for Investigative Journalism analyzed the nearly 200 records requests the agency received in the first six months of 2012. The analysis found the DOA took an average of 24 days to provide records or denials.

Another finding: The DOA took considerably longer to process requests from media and politically affiliated groups than those from businesses, government officials or ordinary citizens.

The office of DOA legal counsel Elisabeth Winterhack, who handles most of the agency’s records requests, referred requests for comment to DOA spokeswoman Stephanie Marquis.

“Our agency receives hundreds of requests each year,” Marquis wrote in an email. “We process multiple requests simultaneously, in the order they are received, but some are far-reaching and take much more time to compile.“

And Marquis, noting that the DOA made space available for the Center’s review, faulted its analysis, saying that “to cherry-pick instances from those (records requests) is disingenuous and does not tell an accurate story about the diligent work by the agency to fill all requests in a timely fashion and accommodate our requestors as much as possible.”

Law’s dictate is “without delay”

The state Department of Administration is an expansive agency with more than a dozen divisions, nearly 1,000 employees, and a $1 billion annual budget. It deals with everything from energy to gaming to state facilities.

In all of 2012, the DOA received about 400 open records requests. These ranged from reporters asking about the use of state planes, to a former state employee seeking records that contain his name, to a resident wanting the “contingency plan the DOA has in place when/if Gov. Walker is arrested.” (The DOA said no such plan existed.)

The state Department of Justice, which has statutory authority to interpret and enforce the state’s open records law, said it handled 294 requests last year but did not know its average response time. The agency has long advised that simple requests should be handled within 10 working days.

The Department of Natural Resources, according to spokesman Bill Cosh, responded to the 337 requests it received last year in an average of 12.4 days, roughly half that of DOA.

Wisconsin’s open records law directs custodians to fulfill or deny requests “as soon as practicable and without delay.”

Other states set more precise time limits. In Illinois, government agencies must “either comply with or deny a request for public records within five business days,” unless a request qualifies for an extension for some specific reason, like the need to retrieve records from remote locations.

Marquis said that DOA officials “acknowledge all requests within 10 days.” The agency’s internal records policy does not mention time limits, but stresses that every request be forwarded to legal staff in the secretary’s office.

“An employee other than a records custodian should never make a determination” as to whether or not to release a record, the DOA’s policy states.

Of the 194 records requests received by DOA in the first half of 2012, about half drew a final response within 14 days, roughly congruent with the 10 working days standard. Another 43 requests took over a month, including 17 requests that took more than two months. The longest was Stein’s request for Huebsch’s communications regarding Archer.

But the 12 requests categorized as political or advocacy, including those from the liberal group One Wisconsin Now, the Center for Media and Democracy, and the state Democratic and Republican parties, took an average of 36 days.

The 30 requests from news media had the longest average response time, at 56 days.

Even some simple media requests involved long waits. It took the agency 56 days to tell Stein that it did not have some records he sought on law enforcement overtime costs. And when the Daily Reporter of Milwaukee sought details about a minority business program, the DOA responded 72 days later — with an email identifying some web links.

Of the 43 requests that took the DOA more than a month to process, 17 are from media.

The most prolific media requester was the Journal Sentinel, with seven requests during the period under review. The average response time was 106 days, even including a request from reporter Patrick Marley that was fulfilled the same day.

“It can be frustrating,” Marley said. “It takes longer to receive records from DOA than I would sometimes expect.” But, he added, DOA officials “may feel those of us in the media expect them to drop everything and produce records.”

Last November, the John Doe probe revealed that a Walker campaign staffer urged that Milwaukee County staff “drag out” an open records request from the Democratic Party of Wisconsin. One Wisconsin Now has suggested this is part of an ongoing pattern.

“I think it’s endemic of the Walker administration that openness is not a priority,” said Mike Browne of One Wisconsin Now. “It seems like there’s a general policy to charge as much as possible and take as much time as possible.”

In fact, the DOA routinely waives its usual 25-cents-per-page fee when the volume of records is small. During the period under review, this happened for two of the three requests from One Wisconsin Now.

The records law allows custodians to charge for “the actual, necessary and direct cost” of making copies, and in some cases for the time spent locating records.

Roughly two-thirds of the requests to DOA yielded records, the Center’s analysis found. Sometimes requesters got everything they sought; other times, some records were withheld or redacted.

About two dozen requests were denied, usually because they sought contracts that had not yet been finalized. In another three dozen cases, requesters were told there were no records responsive to their requests or did not follow through when asked to pay a fee to obtain access.

That’s what happened in more than half the 26 cases in which the DOA sought fees for processing requests. Only about a dozen requesters did pay, and the total collected was less than $2,000.

The DOA charged the Center $162 for six hours of staff time to locate records requests from 2012. It took the agency 20 days to respond with a request for payment, which was promptly provided, and a little more than two months to produce the records. It waived the fee for the small number of copies provided.

Marquis, in her email, said the DOA spent an additional five hours redacting information from the records provided to the Center. Under current state law, records custodians may not charge for this task, but the Legislature is now considering a bill that would allow this.