This article has been corrected. It contained several errors in the “Caps on damages” section. It also incorrectly said Act 2 eliminated two-for-one fines; that passed as a separate bill in 2011. 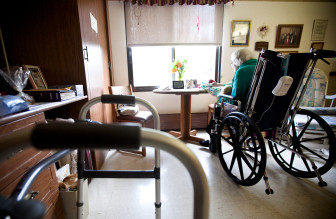 Families’ abilities to hold potentially negligent nursing facilities accountable have been diminished by a recent change in state law that bars records of abuse and neglect from use in the courts, the Wisconsin Center for Investigative Journalism has found. The Center’s investigation also shows that some long-term care facilities are failing to report deaths and injuries, as required by law.

This project, A Frail System, explores those issues and offers families help in identifying which of the state’s nursing homes have been sued or cited for major problems.

State records of abuse, neglect in nursing homes barred from use in courts by Wisconsin’s new tort reform law

Wisconsin Act 2 of 2011 changed state law regarding long-term health care providers in a number of ways. Here are some of them:

Certain records are inadmissible: State investigation records of nursing homes, and incident reports that facilities submit after a resident’s injury or death, are barred from being used in civil and criminal cases. These records are still available to the public. (See sidebar: How to find nursing home inspection reports.)

Caps on damages: In medical malpractice lawsuits against long-term care providers, plaintiffs seeking non-economic damages, for such causes as pain and suffering, are limited to $750,000, the same limit already in place for cases against other health care providers. And punitive damages may not exceed $200,000 or double any compensatory damages recovered by the plaintiff, whichever is greater.

Two-for-one fines: If the state and federal government fine a nursing home for the same violation, the state fine is eliminated, according to a separate 2011 bill.

One thought on “How tort reform bill changed state law”