The Madison Police Department’s internal investigation has exonerated an officer who shot and killed an unarmed man who mistakenly entered a neighbor’s house while intoxicated. But for some, it has left lingering questions about the adequacy of the department’s review. 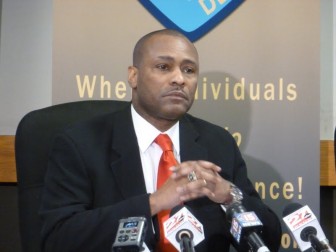 At a news conference Wednesday to announce the results of the department’s probe, Police Chief Noble Wray called officer Stephen Heimsness’ decision to use deadly force “objectively reasonable,” consistent with his training and police standards.

Heimsness, who has been on paid administrative leave since the Nov. 9 shooting, will now return to active duty.

The department also released a brief review of the incident by the state Department of Justice. The review found that Heimsness’ use of deadly force was justified, as did an earlier investigation by Dane County District Attorney Ismael Ozanne.

But Jeff Scott Olson, an attorney who represents the family of the slain man, Paul Heenan, said “an investigation by the department that employed the officer in question lacks the appearance of neutrality and impartiality. I believe my client would like an outside investigation.”

Olson said a probe could be conducted by another police department or by a private police expert. WKOW-TV in Madison reported that Heenan’s friends and family are using a Facebook page to call for a fresh investigation into Heenan’s death.

John Heenan, Paul’s father, told the Wisconsin Center for Investigative Journalism “we’re not at all surprised at the outcome of the investigation.” He said he doesn’t understand why the review of the case was conducted by the officer’s own department.

Wray addressed this issue at the news conference, saying he believed his department “can perform a fair and impartial” review in cases where officers use deadly force, as it has done in the past.

Heenan, 30, was shot three times by Heimsness after police were called to the east side Madison home of Kevin and Megan O’Malley in the early morning hours of Nov. 9.

Heimsness arrived on the scene to see Heenan and Kevin O’Malley engaged in a physical altercation. Heenan purportedly ignored commands to “get down” and physically engaged with Heimsness.

According to a statement issued Wednesday by Wray, “It was officer Heimsness’ perception that Mr. Heenan also attempted to grab his handgun,” which the officer had drawn.

O’Malley, in a Center article published Sunday, said Heenan was drunkenly “flailing and swatting at the officer,” but that he never saw him try to grab Heimsness’ gun.

Olivas, who conducted the internal probe, confirmed at the news conference that Heimsness never identified himself as a police officer. But police said this was not a violation of policy. They noted that Heimsness was in full uniform and was shouting commands at Heenan, which he did not heed.

Police played a portion of a video taken on Nov. 16 in which O’Malley, playing the part of Heenan, reenacted the physical contact that occurred, both between himself and Heenan and Heimsness and Heenan.

In the video, O’Malley tells police, “I was yelling, ‘He’s my neighbor, he’s my neighbor,’ multiple times.” A summary of the internal investigation refers to O’Malley “stating or yelling something regarding Heenan being a neighbor.”

At the news conference, Wray called O’Malley a “credible witness” but maintained that neither Heimsness nor another officer arriving on the scene heard this being said. Police have also said knowing that Heenan was a neighbor would not have changed the circumstances that led to Heimsness employing deadly force.

O’Malley, in the video, also states that just before the shooting “Paul stepped back” from his entanglement with Heimsness. He earlier told the Center that he did not see Heimsness push Heenan away, which is what police said happened, but acknowledged that this may have happened.

Attorney Olson said that, insofar as there are discrepancies between what O’Malley related and what police say happened, “I’m inclined to argue that O’Malley’s version is more credible.” He said O’Malley was a “disinterested observer who has no reason to misrepresent what he saw.”

O’Malley, who watched Wednesday’s news conference online, said it was good that more information had been released and will continue to be released, which will “enable the public to understand this more fully.”