Scott Walker isn’t anybody’s idea of a champion of campaign finance reform. He was elected governor in 2010 after outspending the competition in what was then the costliest statewide race in Wisconsin history, at $37.4 million. That record was shattered in this year’s recall election, when an estimated $81 million was spent, including $36 million by Walker’s own campaign.

In between, Walker and his fellow Republicans in the Legislature killed the state’s already weak system of public financing, touted as the best way to constrain spending and preserve competitive elections.

But Walker, in a recent interview with the Wisconsin Center for Investigative Journalism, did not dispute that most people believe money plays too great a role in politics. He even offered suggestions for reducing its influence.

“One of the biggest things is transparency,” Walker said. “The more transparency involved, the more people could hold folks accountable, for whether it’s $5 or $500, or whatever the amount may be.”

Walker also would end the ability of individual donors to give unlimited sums to recall election targets — so long as recalls were restricted to situations involving “misconduct in office or some other ethical issue.” Now the only prerequisite is gathering enough signatures.

As the governor put it, “I think most people, having gone through the recalls, no matter where they stood on the vote, would prefer that recalls weren’t as frequent, that they were limited to certain specific purposes, and in doing so that there were limits on fundraising.” 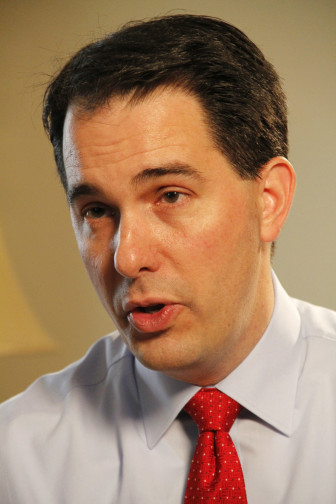 Gov. Scott Walker : “The more transparency involved, the more people could hold folks accountable, for whether it’s $5 or $500, or whatever the amount may be.” Kate Golden/Wisconsin Center for Investigative Journalism

Increasing transparency and ending the ability of recall targets to accept unlimited sums — Walker, in the recall, snared more than $7 million from donors who exceeded the usual $10,000 limit — are among the reforms backed by a coalition led by the nonpartisan Wisconsin Public Interest Research Group, or WISPIRG.

In the fact, the coalition’s top goal is enacting new laws to ensure “that the public can see where every single penny spent on state elections comes from.” Currently, reflects WISPIRG director Bruce Speight, “A lot of money coming into elections is secret.”

“We have a huge ‘dark money’ problem,” McCabe says, using a term coined in the post-Citizens United era. “If a group wants to spend unlimited amounts of money and keep its donors secret, there are easy ways to do that.”

Citizens United allowed corporations to pour cash into political campaigns, even to urge the election or defeat of individual candidates, so long as act independently of the candidates’ campaigns. This has unleashed super spending by super PACs, which under federal law are required to reveal their donors, and by nonprofit groups, which are not.

Citizens United affirmed that government can impose disclaimer and disclosure requirements. The majority opinion by Justice Anthony Kennedy even encouraged this, saying disclosure “enables the electorate to make informed decisions and give proper weight to different speakers and messages.”

It almost sounds like Kennedy and Walker are on the same page. But neither the governor nor
GOP legislators have rushed to embrace new disclosure rules in Wisconsin, part of a package of reforms that McCabe’s group has had drafted into potential legislation.

As for revisiting recalls, McCabe notes that ending unlimited donations could be done with a simple bill while changing when recalls can occur requires a state constitutional amendment, a multi-year process. But he allows that there is plenty of time.

“It’s going to be a generation or more,” he predicts, before Wisconsin sees another recall.