• Wisconsin’s county-run jails are overloaded with people with mental illness — but services are largely inadequate.
• The state Department of Corrections is charged with oversight but does not evaluate the quality of jails’ mental health care.
• For nearly a quarter-century, the Legislature has required the DOC to collect and summarize annual reports on jails’ mental health care, but most jails have not provided the information, and the DOC acknowledges it has not been asking for them.
• One-third of Wisconsin’s jails have been cited for inadequate suicide prevention efforts.

There have been 52 suicides in Wisconsin county jails from 2003 to 2012. Explore the Center’s map. 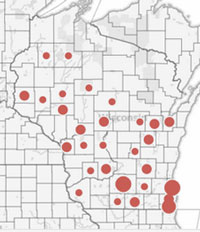 Brenda Mombourquette tried three times to kill herself while in jail custody. She was not on suicide watch at the Monroe County Jail, despite a doctor’s recommendation. Her final attempt, in November 2002, left her with serious brain damage.

Her sister sued the jail on Mombourquette’s behalf, accusing the jailers and nurses of deliberate indifference to protecting Mombourquette. Her lawyer claimed the Cashton woman had reported a night shift supervisor’s sexual assault of another inmate with mental illness, before that supervisor failed to follow the doctor’s orders to put Mombourquette on suicide watch. The jail, which had been repeatedly criticized in state inspection reports for its lack of suicide prevention efforts, agreed to pay a maximum of $13 million.

Since 2003, 52 Wisconsin county jail inmates have taken their own lives. Department of Corrections jail inspector Nancy Thelen said that generally, Wisconsin’s 72 county-run jails are doing “a very good job with their suicide watches.”

But a Wisconsin Center for Investigative Journalism review of the counties’ most recent jail inspection records found that at least one-third of them had, like Monroe County, been cited for problems with their suicide prevention efforts.

Even the La Crosse County Jail, which an inspector described as “a leader and model for other jails throughout the state and nation,” was not properly documenting actions relating to potentially suicidal inmates, the report found.

In a 2009 DOC survey of jails about their mental health services, less than half of the 47 respondents said inmates were routinely screened by a registered nurse or mental health professional.

“He exhibited no suicidal behavior,” Matz said. “That was one that nobody saw coming, including his parents. I don’t know what it was, other than fate.”

Roy Sindelar of Weyauwega was alive when officers found him, but their efforts to resuscitate him failed. Citing a demand for mental health services, Matz said he is requesting an increase in counseling services from 30 to 40 hours a week. 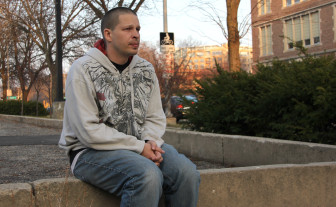 Eric Tomlinson of Madison, in and out of jail, said he struggled with suicidal thoughts but never saw a counselor in jail. Rory Linnane/Wisconsin Center for Investigative Journalism

In a Feb. 15 inspection of the Winnebago County Jail, Thelen had recommended that the jail examine its mental-health services to ensure they were adequate.

What the Monroe County Jail did in response to Mombourquette’s suicide attempt 10 years ago is unclear.

Mombourquette’s case was one of three successful lawsuits that alleged mistreatment of inmates with mental illness at the Sparta jail. Another inmate killed himself in 2008, according to the DOC. And a June inspection found “minor” problems with officers failing to check on potentially suicidal inmates at proper intervals.

The Monroe County Jail administrator did not respond to multiple messages over two weeks seeking comment.

In at least three county jails — Adams, Crawford and Green — inspectors noted lack of suicide prevention measures for the sixth year in a row. Thelen said inspectors work with deficient jails to improve their procedures.

But placing inmates on suicide watch is far from ideal, because it may exacerbate their mental-health problems. Suicidal inmates may been isolated. And most suicides are hangings, so jail officials must remove anything that could be made into a noose, leading to sparse accommodations.

Sam Kalinoski of Madison said he was isolated on suicide watch for three days in the Dane County Jail while incarcerated four years ago for violating terms of his probation. Kalinoski said he had only a blue vest to sleep in and none of his medications for bipolar disorder. He called the experience “disturbing,” with “crazy people around me, making noise in nearby rooms.”

“You watch the person 24 hours — but you’re also subjecting the person to great distress in doing so,” said Ron Honberg, policy and legal director for the nonprofit National Alliance on Mental Illness. “The ultimate solution is to significantly decrease the number of people with mental illness incarcerated.”

Yet suicide watch is an essential prevention tool for jailers.

Said Mombourquette’s attorney, Michael Devanie: “Suicide watches are extremely effective — if they do them.”