A side-by-side comparison of scoreboard screens from the two bidders, YESCO and Daktronics, was staged Sept. 18, 2012. YESCO posted this video on YouTube.

Searchable contract documents obtained via public records requests to UW Athletics and the Department of Administration.

Update, Dec. 18: In response to this story, a key legislator is asking state and UW-Madison officials to review the scoreboard contractor selection process to see if the jobs should be rebid. Read the story here.

A contractor hired by the state to manage a $76.8 million renovation of Camp Randall Stadium agreed to accept a higher bid for a new scoreboard over a competing offer that an outside consultant advised was of better quality.

The contractor, J.P. Cullen & Sons of Janesville, is a listed subcontractor on this bid, for which it stands to receive more than a half-million dollars.

The new state-of-the-art scoreboard, slated to be built in 2013 (the old one was recently removed), is part of the renovation that J.P.Cullen is under contract with the state Department of Administration to oversee. The contract calls for J.P. Cullen to be paid up to $61.4 million for its role, including the hiring of outside contractors.

UW System spokesman David Giroux said the project will be funded entirely by the University of Wisconsin-Madison Athletics Department, from donations and sports-related revenue, such as ticket sales. Most of the money was borrowed using state bonding authority.

J.P. Cullen received two bids in response to its July request for proposals for the scoreboard’s video component. A Utah-based company called YESCO (for Young Electric Sign Company) offered to do the job for $2.7 million. Daktronics, of South Dakota, submitted a $3.4 million bid.

At the direction of the Athletics Department, Anthony James Partners, a Virginia-based company specializing in audio-visual consulting, was hired by J.P. Cullen to provide advice and technical assistance. After reviewing the two proposals, AJP, in an Aug. 17 report, strongly recommended the YESCO bid, saying it delivered more pixels and had a more efficient design, at a significantly lower cost.

“The $700,000 price differential is just too great to not recommend YESCO,” AJP wrote. The consultant acknowledged that the UW and Daktronics “have a long history together” — the company was previously hired for scoreboard upgrades at Camp Randall and the Kohl Center — but felt the YESCO bid was superior.

“We simply believe that YESCO has won this bid,” AJP wrote in its report to J.P. Cullen.

Instead, the job went to Daktronics, whose bid listed J.P. Cullen as the scoreboard installer. Then J.P. Cullen took steps to freeze AJP out of the process and terminate its $137,000 contract.

“I do this for a living. I’ve won and lost many jobs,” said Chris Olinger, a Wisconsin-based YESCO sales representative who worked on the rejected bid. “This was the most unethical bid I’ve ever seen.” 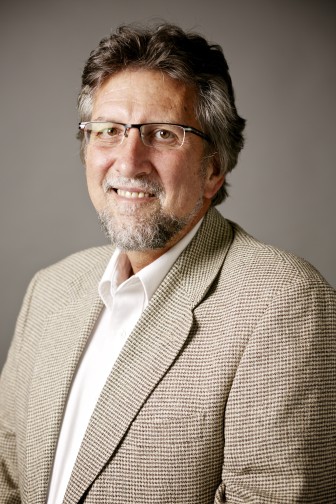 Denis Collins, an Edgewood College professor who specializes in business ethics, said J.P. Cullen’s role in picking a bid on which it is a subcontractor may constitute “a major conflict of interest.” Courtesy of Denis Collins

Denis Collins, a business professor at Edgewood College in Madison who specializes in business ethics, said J.P. Cullen’s role in selecting a bid it stands to gain from “raises a lot of red flags” and may constitute “a major conflict of interest.” He called the process “highly questionable.”

UW and state officials declined to respond directly to ethics questions. In response to a request for comment on J.P. Cullen’s role in picking a bid from which it will benefit, Justin Doherty, the UW’s associate athletic director for external relations, said in an email: “The UW Athletics Department has been working with the Wisconsin Department of Administration (DOA) to work within the state of Wisconsin guidelines.”

Tim Luttrell, the DOA’s point person on the project, declined comment and hung up on a reporter. Olinger said he twice left messages for Luttrell “asking how J.P. Cullen could run a state bid and bid against us.” He said Luttrell did not respond.

Olinger contacted the Wisconsin Center for Investigative Journalism in early October and was interviewed several times, sent several emails, and provided documentation. But later, after the Center began making inquiries of the UW and state, Olinger stopped responding to emails and calls, without explanation.

The DOA and Athletics Department both provided records in response to open records requests. They show that the scoreboard bid consisted of two components: the video portion and a new sound system. Daktronics, which bills itself as “the leading designer and manufacturer of electronic scoreboards,” bid on both parts.

Daktronics’ bid for the video component itemizes the cost of installation, for which J.P. Cullen is the listed subcontractor, at nearly $1.3 million. But DOA spokeswoman Stephanie Marquis said the various installation-related jobs will “be performed by several subcontractors, not just J.P. Cullen. At most, J.P. Cullen’s portion of the installation is approximately $585,000.”

YESCO’s bid called for using a different Wisconsin installer, at an itemized cost of just under $1.1 million.

Daktronics also submitted a sound system bid of $1 million, slightly less than two competing bids. AJP analyzed the two lowest bids but did not make a firm recommendation, saying there were “two good options to choose from.”

Marquis said that, in the end, Daktronics agreed to build both the video scoreboard and sound system for $3.85 million. That represents an apparent savings of about $500,000 from Daktronics’ original bids, but is still slightly higher than the bids from YESCO and the competing sound system provider.

“The selection of Daktronics occurred because the project team determined that Daktronics had a superior quality product for the intended use at a price within budget,” Marquis wrote in an email, noting the state’s contract with J.P. Cullen did not require it to pick the lowest bidder.

Olinger told the Center that YESCO was not provided with AJP’s report recommending that his company be picked. But the released emails show that UW Athletics Department officials sent a copy of the report to Daktronics. Daktronics then produced a detailed rebuttal that accused AJR of being biased in YESCO’s favor. YESCO is not among the listed recipients of this rebuttal.

After AJP filed its report, J.P. Cullen project head Shecterle asked the two bidders to stage a side-by-side viewing of their screens on campus. AJP was not invited to this demonstration. When AJP principal Frank Moraski sent an email inquiring about this, Shecterle replied, “We do not need anything from you right now.”

Moraski and Tony Mulder, Daktronics representative on the project, did not respond to requests for comment.

The demo, known as  “shootout,” was held on campus on Sept. 18. Early that morning, Shecterle emailed Athletics Department officials and others complaining that YESCO brought a bigger screen than its rival (“I told them I was not happy about this”) and advising: “Currently Daktronics display does not look as bright as YESCO’s. This can be adjusted.”

Olinger said the difference was dramatic and that “Everybody who walked by said our screen looked better.” A video of this demo taken by YESCO is posted on YouTube, and can be accessed at tinyurl.com/bwnyj8v.

Chuck Dyer, a UW-Madison computer science professor who has studied video image quality, reviewed the YouTube video at the Center’s request. Without knowing the presenters, he said the screen from YESCO appeared sharper and had a broader range of colors, as evidenced by smoother gradients. But he felt this screen’s larger size “could have introduced some bias.”

Consultant gets the ax

The released emails show that J.P. Cullen’s Shecterle began taking steps to fire AJP and hire another consultant. On Sept. 26, the same day that he notified YESCO that Daktronics won the bid, he emailed UW officials asking for examples of where AJP “failed to perform or meet a commitment.”

On Oct. 1, J.P. Cullen sent a letter to AJP terminating its contract, listing three pages of “ongoing performance problems,” most alleging that AJP failed to make requested adjustments to the project design and bid proposal. AJP’s report recommending YESCO was not mentioned.

Doherty said the issue of how much AJP will be paid for its services remains unresolved.

Shecterle, in his email declining comment, suggested that all’s well that ends well: “By the start of the next football season, the University of Wisconsin and the people of the state of Wisconsin will have a superb, new state-of-the-art scoreboard and sound system that will enhance the game day experience inside Camp Randall Stadium.”

Oct. 7, 2011: The UW Board of Regents approves a $76.8 million renovation of Camp Randall stadium, using $49.2 million in borrowing supported by Athletics Department revenue and $27.6 million in gift funds.

Oct. 28, 2011: The state Department of Administration contracts with J.P. Cullen & Sons in the amount of $61.4 million for work on the project, from which it must pay contractors.

Nov. 11, 2011: J.P. Cullen enters an agreement with Anthony James Partners (AJP) to serve as a consultant to the project’s scoreboard component, for an agreed-on sum of $137,000.

Aug. 17, 2012: After evaluating the video scoreboard bids and taking part in interviews with the bidders, AJP strongly favors picking the bid from YESCO. On this same day, J.P. Cullen gives notice that it wants to stage a side-by-side demonstration of the two screens.

Aug. 21, 2012: Daktronics, having been sent the AJP report by UW Athletics Department officials, provides a detailed rebuttal. The report and rebuttal were apparently not shared with YESCO.

Sept. 18, 2012: The side-by-side demo takes place on the UW-Madison campus, Shecterle sends an email to interested parties stating his unhappiness that YESCO brought a bigger screen and indicating that adjustments could make Daktronics’ screen look brighter.

Sept. 26, 2012: Shecterle informs YESCO that Daktronics is the winning bidder. On the same day, he asks UW officials if they had examples of “where AJP failed to perform or failed to meet a commitment.” Some are provided. By this time, Shecterle has already agreed to hire a new consultant.

Documents were obtained via open records request from UW Athletics and the state Department of Administration.