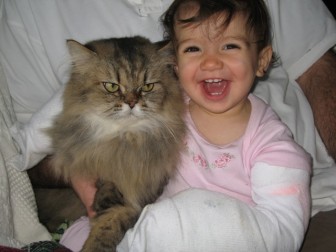 Lila Stephens wears full casts on both arms in October 2010, three weeks after she touched the glass in front of a gas fireplace at a Wisconsin Dells resort and suffered third-degree burns. She was 11 months old at the time. Courtesy of Fred Stephens.

To stave off regulation and lawsuits over severe burns to toddlers, manufacturers will provide protective screens as standard equipment with new gas fireplaces.

The industry has revised its voluntary guidelines to call for the addition of mesh screens to be permanently attached to new fireplaces to prevent contact with the scorching glass fronts, which get hot enough to melt skin.

Fireplace makers will have a long lead time–until Jan. 1, 2015–to provide screens with new units, though companies are already retooling to do it sooner, said Tom Stroud, a senior manager with the Hearth, Patio and Barbecue Assn., an industry group.

As reported by FairWarning, more than 2,000 children ages five and under were injured by contact with the unprotected glass in a recent 10-year period, according to a federal database, with many suffering 2nd and 3rd degree burns. That has triggered at least a dozen lawsuits and scrutiny by the Consumer Product Safety Commission, which in June, 2011, sought public comments on the need for federal standards.

Specifications for the screens are included in revisions to the guidelines that will be published in the next few weeks by the American National Standards Institute, which certifies voluntary standards for industry groups. An industry technical committee that previously had rejected the need for a physical barrier developed the new guidelines.

Separately, the hearth and patio association has launched an information campaign to alert current owners of an estimated 11 million gas fireplaces that the glass can get dangerously hot, and that they should buy a screen from a fireplace store if there are children in the home. Many users of gas fireplaces weren’t the original purchasers and never saw any warning statements.

The Consumer Product Safety Commission is holding off on regulations in response to the industry moves. Spokesman Scott Wolfson said the agency will use social media to draw attention to the industry’s safety tips. ‘’We share a common goal to prevent young children from suffering terrible burn injuries from touching scorching hot fireplace glass,’’ he said.

However, the industry actions are drawing mixed reviews. Jerome Tapley, a Birmingham, Ala., attorney involved in lawsuits against several fireplace makers, said it was “very troubling’’ that the companies will have more than two years to begin providing the screens, and that there are no plans to offer retrofits to current owners.

Dan Dillard, executive director of the non-profit Burn Prevention Network and chairman of the prevention committee of the American Burn Association, said the safety commission should adopt mandatory standards, rather than rely on voluntary steps by the industry.

And Dillard, who said he believes the federal estimate of about 200 child burn cases per year is unrealistically low, noted that members of the prevention committee plan to prepare a white paper with injury data from leading pediatric burn centers. The aim, he said, will be to “bring a spotlight focus to the severity of this.”

While saying 2015 seems like a long lead time, Wolfson questioned whether the deadline could be speeded up by a time-consuming federal rulemaking. Moreover, he noted, the commission is precluded by law from regulating when a voluntary standards groups is taking actions similar to those the agency would take.

Two top fireplace makers already provide safety screens with each new gas fireplace. Hearth & Home Technologies of Lakeville, Minn., for several years has included screens with its glass-enclosed fireplaces. And in 2011, Lennox Hearth Products of Nashville, Tenn., began offering a free attachable screen with each fireplace as part of the settlement of a class action lawsuit.

Under the voluntary standard, the glass is allowed to reach temperatures as high as 500 degrees or 1,328 degrees Fahrenheit, depending on the type of glass used. The limits are meant to keep the glass from failing, not people from getting burned. Up to now, most manufacturers have not provided screens or prominent safety warnings out of fear of marring the aesthetic appeal of fireplaces or scaring off
customers.

When an official of Miles Industries, a Canadian fireplace maker, was asked in an April deposition why the company had not warned that touching the glass could result in 3rd degree burns, the official said that would be “fear-mongering.‘’ Another Miles executive testified that, with that warning, “As a parent, I don’t know if you’d buy such a fireplace.”

Some have argued that the risks of a fireplace are so obvious that keeping kids safe is simply a matter of good parenting and common sense. However, while everyone understands the risk of an open flame, many fail to recognize the hazard of the unprotected glass, which can remain dangerously hot for at least a half-hour after being turned off.

Some child burn victims were hotel guests whose parents had no experience with gas fireplaces. One such parent was Fred Stephens, whose 11-month old daughter Lila had to have skin grafted from her abdomen to both palms after suffering 3rd degree burns from fireplace glass at a resort in the Wisconsin Dells in 2010.

Stephens, a probation officer who lives in a suburb of St. Paul, Minn., said he was “just devastated” and felt “horribly guilty’’ that he failed, out of ignorance, to protect his child.

Lila, who recently turned three, has some visible scarring but full use of her hands, Stephens said. The family recently settled a lawsuit stemming from the incident.

Stephens said including fixed screens will be a positive step, adding that it’s “very frustrating’’ that it took legal pressure to achieve this. But, Stephens said, “that seems to be the way things work out with any industry in order to force some meaningful change.”