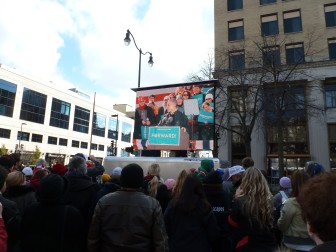 A projection screen carries Obama’s image to the edges of the gathering. Bill Lueders/Wisconsin Center for Investigative Journalism

There have been times during the past two years when it felt as though Wisconsin was at the center of the political universe. Today was one of those times.

President Barack Obama returned to Madison — his third visit to Wisconsin in five days — to rally his supporters to cast their votes tomorrow to help “finish what we started” with his election four years ago.

“Turn out for me,” he urged the crowd, estimated at about 20,000 people, in downtown Madison. “We’ll win Wisconsin and we’ll win this election.”

Obama followed rocker Bruce Springsteen on stage, calling him “an American treasure” and noting his own good fortune at being able to hang with the Boss during a momentous personal occasion.

“I get to fly around with him (Springsteen) on the last day that I will ever campaign,” Obama said. “That’s a good way to end things.”

Obama delivered a mostly positive message, highlighting some of the successes of the past four years, from the rescue of the automobile industry to the killing of Osama bin Laden.

But the President sought to draw a sharp distinction between his agenda, which he pegged as progressive and forward-looking, and that of his opponent, Mitt Romney, whom he accused of wanting to take the country backwards.

Tomorrow’s election, Obama said, “is not just a choice between two parties and two candidates (but) between two different visions of America.”

Obama noted that former Bill Clinton did what Obama himself hopes to do and hiked taxes on the wealthy, which Romney at the time opposed, saying it would crash the economy.

“Does this sound familiar?” Obama asked. “Turns out his math back then was just as bad as it is now.”

Obama drove home his point: “This shouldn’t be that complicated. We tried our ideas. They work … We tried their ideas. They don’t work.”

Now Romney, Obama said, “is trying to convince you that these bad, old ideas are change.”

At one point, Obama made joking reference to the ability of upper-income earners, like himself and his campaign partner, to bear a higher tax burden: “I haven’t talked to Bruce but I know he can afford it.”

In recent days, Romney has been suggesting in campaign appearances that Obama lacks the ability to break the impasse in Congress over issues like spending and the national debt. Obama, in his Madison address, accused Republicans of having pursued “a policy of gridlock” for the express purpose of reclaiming power.

Obama said the GOP was counting on voters to be discouraged and walk away, leaving them in control, “pulling the strings, pulling the levers.”

“Their bet is on cynicism,” Obama said. “But, Wisconsin, my bet is on you.”

Springsteen, wearing a vest and loose tie with his sleeves literally rolled up in the brisk November air, performed several songs, including one written for the occasion, with lines like “I came to Wisconsin looking for a date. We kissed and I said, ‘It’s a hell of a state.’ ”

But Springsteen also turned serious and listed reasons for his support of the President, including the healthcare bill, Wall Street reform, and “women’s rights and health issues.” 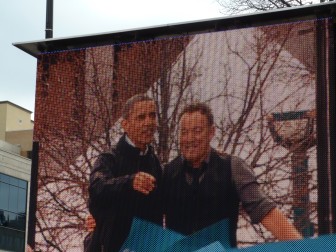 Obama and the Boss share a moment on stage. Bill Lueders/Wisconsin Center for Investigative Journalism

“It’s going to be great to feel the power of your voices and your votes tomorrow,” Springsteen said.

Kohl got off some the rally’s strangest lines, like his extemporaneous praise of Obama, whom he’s known as both a fellow senator and as president. “He is as great as you can possibly imagine.” He also said of Baldwin: “Tell me, have I picked a good person to succeed me?”

But Kohl also sized up the political significance of the occasion, and the state’s pivotal role: “Wisconsin is going to be a very close election. It will be decided not by millions of votes but by a very few votes.”

5 thoughts on “Obama preaches to choir in Madison”