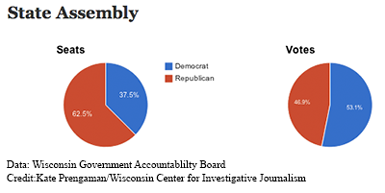 According to state Sen. Tim Cullen, D-Janesville, U.S. House members Baldwin and Ryan in 2001 agreed to redraw their respective districts for each other’s political benefit. He called the deal one of the “classic nationwide examples of gerrymandering.” (Baldwin and Ryan’s offices were contacted for comment Friday afternoon.) This excerpt is courtesy of wiseye.org; the full video of his Nov. 13 remarks is here.

In the aftermath of the Nov. 6 elections, words like “fickle” and “schizophrenic” are being bandied about to describe the Wisconsin electorate.

How else can anyone explain a group of voters who simultaneously picked Democrats Barack Obama for president and Tammy Baldwin for U.S. Senate while preserving a 5-3 Republican edge in its congressional delegation and giving the GOP a commanding majority in both houses of the state Legislature?

But the vote tallies in Wisconsin’s congressional and state legislative races were not nearly as lopsided as the parties’ resulting share of seats, according to a Wisconsin Center for Investigative Journalism analysis. The breakdown between Republican and Democratic votes was close even in the races for Congress and state Legislature, where the GOP scored substantial wins.

Some election observers say these results, which ensure that Republican Gov. Scott Walker will have strong GOP majorities heading into the next legislative session, owe largely to redistricting — the redrawing of voting district boundaries based on the U.S. Census.

“The outcome of this year’s U.S. House as well as state Senate and state Assembly elections testify to the power of redistricting,” said Mike McCabe, executive director of the Wisconsin Democracy Campaign, a nonpartisan clean-government advocacy group.

For instance, Republicans received 49 percent of the 2.9 million votes cast in Wisconsin’s congressional races, but won five out of eight, or 62.5 percent, of the seats, according to the Center’s analysis. The Center analyzed unofficial 2012 results reported by the Milwaukee Journal Sentinel and official 2010 results from the state Government Accountability Board.

The vote breakdown in the state’s congressional races was comparable to that for president and U.S. Senate, where the Democratic standard-bearers won 53 percent and 51 percent, respectively.

Wisconsin’s experience is not unique.

Geoffrey Stone, a law professor at the University of Chicago, recently wrote in a Huffington Post blog that Republicans won 55 percent of all House seats nationally while capturing less than half of the total vote. Stone said the GOP “won control of a substantial majority of state governments” in 2010, then “used that power to redraw congressional district lines in such a way as to maximize the Republican outcome in the 2012 House election.”

In Wisconsin, redistricting based on the 2010 Census was done largely in secret by the Republicans who controlled the state Legislature. Democrats accused the GOP of using this opportunity to cement its electoral advantage, which in itself is not illegal.

In March, a panel of three federal judges upheld most of the state’s redistricting process, including the congressional component. The panel did strike down the redrawing of two Assembly districts, saying it diluted the power of Hispanic voters.

“There is no question — none — that the recent redistricting effort distorted the vote,” said Ken Mayer, a professor of political science at the University of Wisconsin-Madison. “Nobody takes seriously the notion that the legislative plan for congressional districts wasn’t politically motivated.”

McCabe said the lines were “drawn in a way that squeezes most Democratic voters into a few districts and widely disperses their voting power across the rest of the districts.” That left GOP candidates “with a pronounced electoral advantage in congressional and legislative races.” 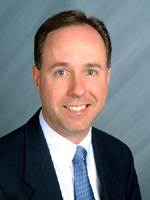 But Rep. Robin Vos, R-Rochester, the Assembly speaker-elect, didn’t agree that redistricting played a significant role in his party’s fortunes. He said there have always been districts that due to high turnout and other factors lean to one side and that the GOP simply did a better job of getting out the vote.

“Every district is on its own,” Vos said. “There are competitive seats in every part of the state. And I think that at the end of the day, voters made a choice to pick the best individual candidate.”

In the 2010 contested Assembly races, the GOP got a slightly larger proportion of seats than votes. In 2012, that pattern was even more pronounced.

This year, Republicans won 56 of the 76 contested Assembly seats in the Nov. 6 election. That’s 74 percent of the seats — which they won with just 52 percent of the 2.2 million votes.

The GOP’s new 60-39 majority in the Assembly is nearly the same as it was heading into the election: 59-39, with one independent.

But the Democrats actually outpolled the GOP in these contested state Senate elections, winning 50.5 percent of the 941,000 votes cast.

Cal Potter, a former Democratic state lawmaker who now serves on the board of Common Cause in Wisconsin, a nonpartisan watchdog group, noted that the redistricting after the 1990 and 2000 Census was done by the courts, because the Legislature and governor were split and could not agree on a plan. This time around, he said, the GOP ran the show and was able to maximize its electoral advantages.

5 thoughts on “Wisconsin vote split was closer than results”