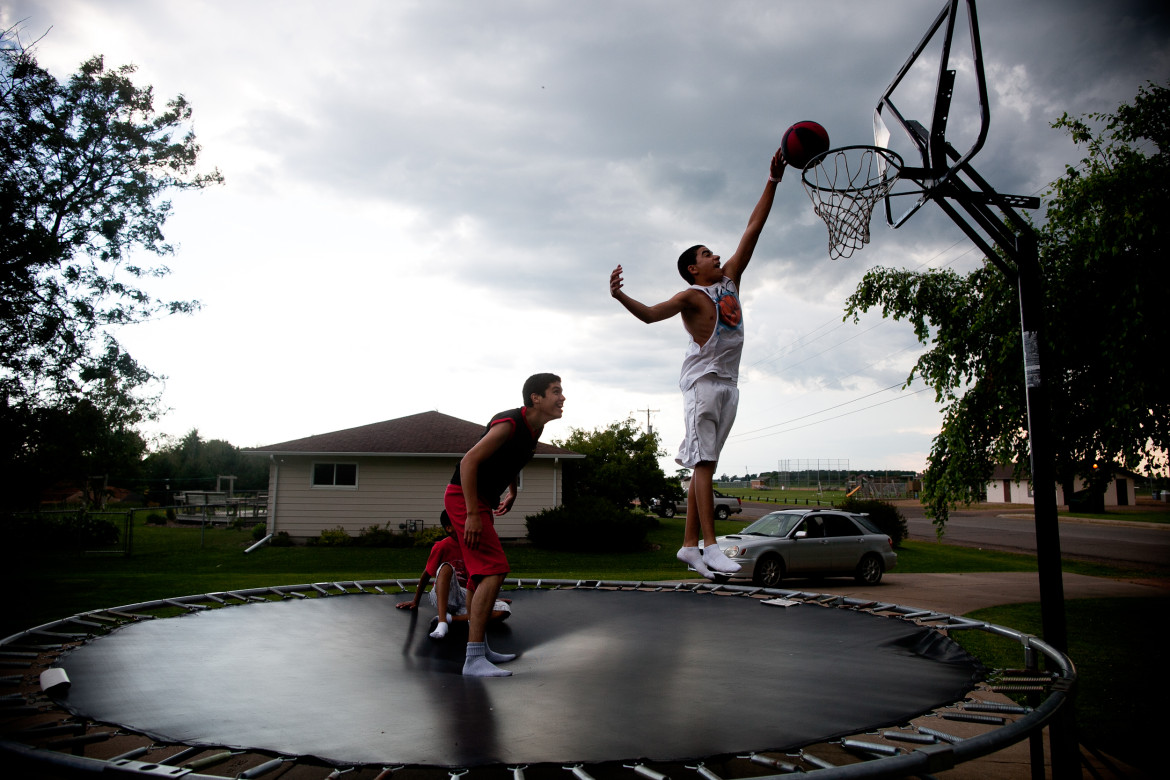 Alex Vasquez, 15, jumps on his trampoline to dunk a basketball during a game against his cousin, Jordi Acosta, 19, in Marshfield, Wis., on July 8, 2012.

RURAL SLIDE: PART THREE OF THREE IN A SERIES 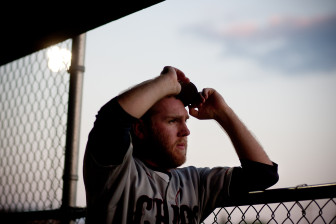 CHILI — Jeremy Meissner, 29, squints in the sunbaked pasture near his 2,200-head Clark County dairy farm. Huron Mireles, 31, a herdsman and one of Meissner’s most dependable employees, joins him in the field as the two discuss the day’s work.

Meissner grew up on this family farm and always knew he would return, to live and to raise his own family.

Unlike many rural Wisconsin counties, Clark County added population from 2000 to 2010, growing by 3.4 percent, to an estimated 34,690. The growth was fueled in part by the Hispanic population, which grew by 219 percent between 2000 and 2010. At the same time, white population grew less than 1 percent.

“Overall, there’s an important effect and important contribution of the Hispanic population,” says Katherine Curtis, assistant professor of community and environmental sociology at the University of Wisconsin-Madison.

“In local communities we often hear about their importance in keeping the dairy industry afloat and rural schools open — in some cases, just keeping rural communities alive.”

In agriculture-based counties such as Clark, Hispanic workers and their young families rejuvenate an aging labor force. Hispanics now make up an estimated 40 percent of all of the state’s dairy workers.

“Around here, you get Hispanic workers, a lot, stopping by, looking for work with experience — which is hard to come by,” Meissner says.

Meissner’s herdsman, Mireles, was born in Zacatecas, Mexico. In 2001, he left four children, a wife and a job at a meatpacking plant in Iowa when he traveled north to find stable work. He’s been at Meissner’s farm ever since. 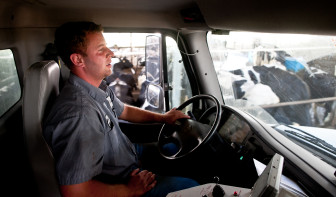 Jeremy Meissner drives a feed truck through his dairy barn at Norm-E-Lanes farms in Chili, Wis., on July 12, 2012.

The arrangement is mutually beneficial. Meissner takes pride in the fact he pays his employees well and he’s often invited to family events such as parties and baptisms. The whole farm, from mechanics to milkers, work together to keep the cows happy, Meissner says.

Even so, hiring Hispanic workers is not something he advertises.

“We usually just talk about it because people are dead set against it,” Meissner says. 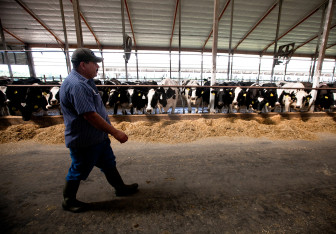 Some local leaders say they are concerned that some of the newest residents may be here illegally. They worry that some immigrants are unable to communicate adequately in English and may be taxing local services.

But Curtis says that’s the same population that should be credited with saving some parts of rural Wisconsin.

“The population would have grown slower and we would be older had it not been for the increase in girth in our Hispanic population,” she says.

Alejandro Vasquez, editor of Noticias, a Spanish-language newspaper in Abbotsford, often serves as an informal advocate for fellow Hispanics.

Vasquez says workers arriving in central Wisconsin are mostly Mexicans who have migrated from other parts of the United States to work in Wisconsin’s dairy industry, where a growing number of large operations, like Meissner’s, provide year-round work.

Clark County ranks first in the state in number of cows and dairy farms. The county’s $1.5 billion agricultural sector generates 63 percent of the business sales and provides 46 percent of its jobs, according to a 2011 UW-Extension report.

But the structure of the industry is changing. In Clark County, for example, some family farms are going away, replaced by a larger, more corporate style of farming. These businesses produce more milk with fewer farms, and they increasingly rely on immigrant labor.

Vasquez says many farm owners are older, and their children don’t want to work on the family farm.

“Who’s going to milk the cows? Who’s going to work the countryside? This is why the Hispanic community has such an important role in the state of Wisconsin. And the government knows it,” Vasquez says in his native Spanish. 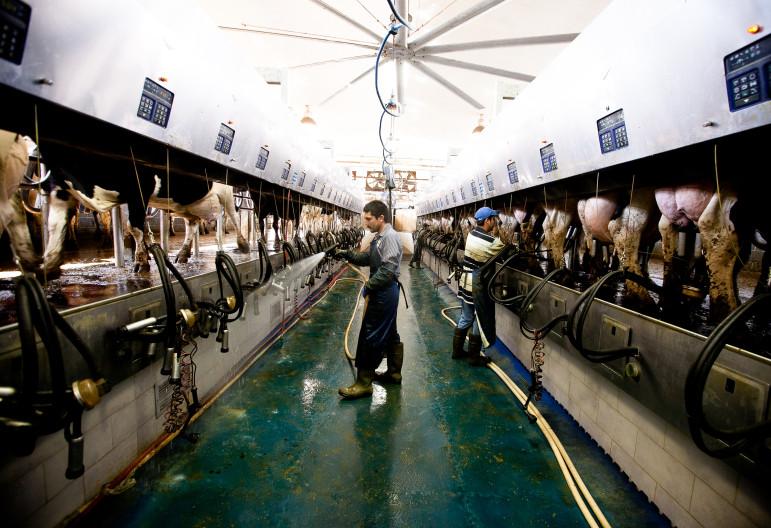 Workers milk cows at Norm-E-Lanes in Chili, Wis. on July 11, 2012. For large dairies like Norm-E-Lanes, Hispanic workers are vital for their daily operations. Lukas Keapproth/Wisconsin Center for Investigative Journalism 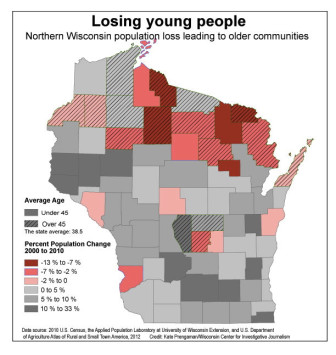 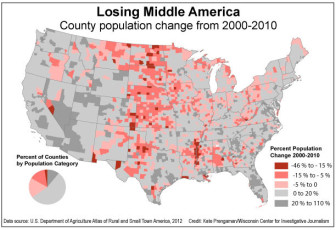 While the median age for white Wisconsinites is 40.9, among Hispanics it is 23.5. The Clark County birth rate is 16.7 per 1,000 residents “incredibly high” compared to the statewide rate of 12.5, according to the Department of Workforce Development’s 2011 profile of Clark County.

“To put it simply, Clark County has a lot of children and a lot of old people, compared to the rest of the state,” the report says.

Reed Welsh, Abbotsford School District administrator, says his district is one of the few in the area that has added students in recent years, thanks to the influx of immigrants. In 2000, just under 7 percent of students were Hispanic; now it’s just over 35 percent. Enrollment has increased from 651 in 2000 to 707 in 2011, an increase of nearly 9 percent.

Vasquez says Latinos not only support the local workforce, but through their spending power — buying gas, vehicles, insurance and groceries — their presence is crucial to the local economy.

Life in Clark County is good, he says. “Here the big fear is of the police.”

Abbotsford Police Chief Ron Gosse acknowledges Hispanic workers are important to the local economy, and he questions whether the area’s farms and meat processing plants could find enough laborers locally without these immigrants.

“Certainly it’s also a challenge,” he adds. “Any time we pull a Spanish-speaker over we have to call in a Spanish interpreter,” which can put a strain on resources.

Experts cite a variety of problems and potential solutions regarding the population losses in Wisconsin’s rural counties. For example:

Problem: Lack of available workers at dairies, a signature Wisconsin industry. Solutions: Hire immigrant workers and reform existing laws. But this leads to tensions over immigration policy and questions over legal status of some workers.

“I know people feel very strongly, in Clark County, on both sides of (immigration reform),” the lawmaker says.

But, he adds, “If there are some people who are not here legally, that’s where the tension comes in. What should be done? That’s not an issue I have jurisdiction over. That becomes a question for the federal government.”

Storm clouds gather over the nearby cornfields, and Vasquez watches his 15-year-old son, Alex, play basketball with a cousin. Alex springs from a trampoline to dunk the ball, rising into the darkening sky.

Vasquez says politicians complain about illegal immigration but have done little to solve it or the shortage of workers for the county’s dominant agricultural sector.

Vasquez says he and his family are legal residents and proud to be Americans.

“This country is No. 1 in the world because of all the races,” he says. “Everyone here knows it — the whites, the blacks and the Hispanics. The only thing we want is to work, in order to live well. That’s all we want. It’s not much.”