For Chris Danou, the temptation is great, too great to resist. “I hate to say, ‘I told you so,’ ” deadpans the Democratic state representative from the village of Trempealeau. “But I told you so.”

Danou, who holds a master’s degree in wildlife biology, tried to rein in what he felt were unwise provisions in Wisconsin’s wolf hunting bill, which sailed through the Legislature early this year. He offered and supported amendments to shorten the season and ban hunting at night or with dogs. His amendments failed, except one requiring carcass registration.

A hunter himself, Danou says he’s not philosophically opposed to a state wolf hunt; he just wanted to avoid the problems he foresaw with giving hunters everything they wanted.

“I remember saying, ‘Be careful what you wish for — you overstep and the courts will step in,’ ” recalls Danou, who ended up voting for the final bill, despite its perceived flaws, along with several other Democrats.

Late last month, in a lawsuit brought by a coalition of Wisconsin humane societies, a Dane County judge issued a temporary injunction against using dogs to hunt their canine ancestors, agreeing that, without better rules, it could lead to devastating confrontations.

The state Department of Natural Resources’ lawyer warned in court that this might mean the agency “will not be able to issue licenses at all.” The agency now plans to proceed with the wolf hunt beginning Oct. 15, but without dogs, which under the law can’t be used until late November anyway. DNR staff will try to craft new rules on dog training and use before then. 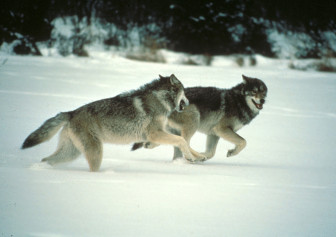 The lawsuit over the use of dogs has thrown a wrench into Wisconsin's wolf hunt, and there may be more legal challenges to come. Credit: Wisconsin Department of Natural Resources

Rep. Fred Clark, D-Sauk City, who sponsored a failed amendment to bar the use of dogs in Wisconsin’s wolf hunt, says it’s just one of a number of “badly written laws that don’t hold up to judicial scrutiny,” like the new voter ID rule. “The final part of how a bill becomes a law is that it ends up in court.”

The litigation did throw a wrench into the process, and more may yet be flung. Robert Habush, an attorney for the plaintiffs, has suggested that further court proceedings would “expose really what happened here,” declining to elaborate. (A Sept. 14 hearing will be held on whether the case should be dismissed.) And Dick Thiel, a retired DNR wolf biologist who gave expert testimony in the dog case, expects other legal challenges to be filed.

Thiel and others suspect the bill was written with substantial input from pro-hunting groups, which invested more than 200 hours lobbying on its behalf, and minimal input from DNR staff and other wildlife professionals.

“They needed to keep science out of it, because there are a lot of flaws in the bill,” asserts Thiel, who is among the 20,000 people who’ve applied for a wolf hunt license. He says the DNR has stacks of reports of wolf attacks on dogs: “It’s just a bloodbath.”

State Rep. Scott Suder, R-Abbotsford, the bill’s lead Assembly sponsor, emphatically denies that hunters called the shots. He says he wrote the bill himself, with input from the DNR, legislative support staff and “all kinds of groups.”

DNR spokesman Bill Cosh says agency staff reviewed and helped tweak the bill, but declines to offer details or say whether it supported the bill’s controversial provisions, like night hunting or dog use: “We do not discuss our confidential conversations with legislators.”

Scott Meyer, a lobbyist for United Sportsmen of Wisconsin, which supported the bill, says hunting groups were consulted during the drafting process but that “hunters don’t write bills.” He acknowledges that other U.S. states with newly minted wolf-hunting bills do not allow dogs, but says they are routinely used for this purpose in Canada. And he argues that the DNR cannot legally enforce a ban on dogs, because the statute allows their use.

Does that mean hunters might disregard rules that would keep dogs out? “I’m not going to speculate,” Meyer says.

3 thoughts on “Did wolf hunt bill go too far?”