Wisconsin leads the country in what could be the worst national outbreak of whooping cough in 50 years. Experts are warning that the current regimen of immunizations may not be enough to protect children from the serious and sometimes fatal disease.

New research confirms the whooping cough vaccine is failing at a higher rate than expected, and scientists are considering adding a seventh dose to the national immunization schedule published by the federal Centers for Disease Control and Prevention. Two recent studies have found the majority of people getting sick are up to date with their immunizations. 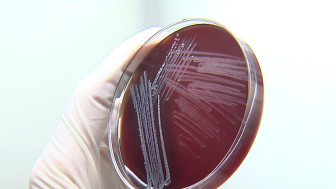 Bordatella pertussis, the bacteria that cause whooping cough, is cultured in a petri dish in a lab at UCLA. Chris Maue/KPBS

Wisconsin has the nation’s highest rate of reported whooping cough cases in 2012. Through July 5, according to the CDC, Wisconsin’s incidence of the disease was 50.7 per 100,000 persons, nearly 10 times the national average. Washington had the second highest rate, with 39.2 cases per 100,000 residents.

Washington has declared an epidemic. Wisconsin has not, but officials insist they are taking appropriate steps, including encouraging vaccinations and booster shots and making sure infants are protected from unvaccinated people.

“We’re calling it a widespread outbreak,” said Beth Kaplan, spokesperson for the state Department of Health Services, adding that using the word “epidemic” does not trigger any specific actions. “Our focus is on awareness and prevention.”

Whooping cough, also known as pertussis, is a cyclical disease that has spiked before. In 2004, Wisconsin reported more than 5,600 cases, according to the state.

Pertussis is a highly contagious respiratory illness that may mimic a cold for the first 10 days. It then can produce a violent and persistent cough with a unique “whooping” sound.

For adults, pertussis may only be a nuisance, like a bad cold. But to infants it can be deadly because they can’t cough up what collects in their lungs, and infections can spread.

The state of Wisconsin reported that one infant with pertussis died in February.

More than 21,000 cases of whooping cough were reported nationwide through Aug. 4, according to the CDC. If that trend continues, 2012 would be the largest outbreak in more than 50 years.

Dr. Patrick Remington, a professor with the University of Wisconsin School of Medicine and Public Health, suggests that whooping cough is on the rise because vaccination rates have declined, in part due to perceived concerns over vaccine safety and potential side effects.

Dr. Patrick Remington called the current whooping cough vaccine “one of the least effective vaccines out there.”

He said the current pertussis vaccine is “one of the least effective vaccines out there,” meaning the percentage of people who should be vaccinated to protect against an outbreak is correspondingly higher.

“You can see outbreaks propagate even with a high level of vaccination,” Remington said.

In 2010, whooping cough cases reached epidemic proportions in California, killing 10 babies and sickening some 9,000 people. An investigation by the nonprofit journalism group Investigative Newsource and public television station KPBS, both of San Diego, raised serious questions about the effectiveness of the vaccine, given that a majority of the people diagnosed with the illness across California had been fully immunized.

Some scientists suggest there is a need for a new vaccine that is more effective and lasts longer.

“I think 2010 was a real eye-opener,” said Dr. James Cherry, a specialist in pediatric infectious diseases at UCLA. “My friends at the department of public health are saying vaccine failures are a much bigger part of this and I agree with them.”

And Dr. Anne Schuchat, the director for the National Center for Immunization and Respiratory Diseases at the CDC, stated during a recent teleconference that while there are large numbers of unvaccinated people in some parts of the country, “we don’t think those exemptors are driving this current wave.”

New studies published in prominent medical journals have called into question the 85 percent efficacy quoted in the vaccine’s package inserts. For example, one study by scientists at Kaiser Permanente found vaccine effectiveness in Marin County, Calif., in 2010 to be between 24 and 79 percent for children ages 2 to 18.

A version of this article published online Wednesday drew a comment from Megan Mielcarek of Green Bay. Earlier that day, Mielcarek was told her 7-year-old daughter may have contracted whooping cough; test results are pending.

“How is this possible?” Mielcarek wrote. “We are very vigilant on keeping up to date with immunizations and she had her last one less than three years ago.”

Time for a new approach?

Public health officials and scientists agree the existing whooping cough vaccines are still the best tool available to prevent and curb outbreaks. They say children who aren’t immunized against the disease are eight times more likely to contract it than fully immunized children.

But some officials, prompted by the numbers of fully immunized people caught up in the outbreaks in California and other states, have begun to question how much protection the vaccines provide, and for how long.

Of particular concern was the number of cases in California occurring in fully vaccinated children 7 through 10 years of age. For cases in which immunization history was known, more than 80 percent of the children in that age group diagnosed with pertussis had been fully vaccinated, according to an analysis of state data.

“We’re seeing waning immunity over time, so it would suggest that we may need more boosters in order to keep elevating the immune system until we come up with a vaccine that has longer protection,” said Dr. Mark Sawyer, a pediatric specialist at Rady Children’s Hospital in San Diego and a member of the committee that advises the CDC on its immunization schedule.

Sawyer said the committee is looking at recommending a seventh dose of vaccine.

Remington said the number of vaccinations is “up to the scientists” but acknowledged there’s room for improvement: “It would be good to have a more effective, safer vaccine for whooping cough.”

2 thoughts on “Whooping cough on rise despite immunizations”