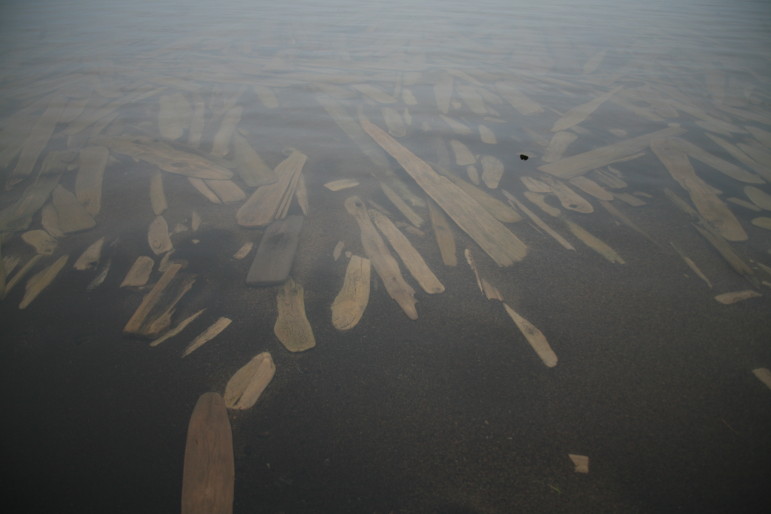 In Ashland, the Superfund site’s 16-acre cove of contaminated sediments is filled with coal tar -- and slabs of wood from the sawmill that operated here in the early 20th century. Picking the antique wood is still a popular activity in the area, though it is not allowed right here. Kate Golden/WCIJ

A century-old tar plume under prime waterfront in Ashland edged closer to resolution this week with a proposed $40 million settlement for part of the cleanup.

The Center covered Ashland’s Superfund site in 2010 — at which point the pollution had already faced 21 years of state and federal scrutiny.

The site is polluted by gooey black coal tar and millions of gallons of contaminated groundwater that the utility Northern States Power-Wisconsin has agreed to clean up, according to the settlement with the U.S. Department of Justice, the U.S. Environmental Protection Agency, and the state Department of Natural Resources, filed in Madison Wednesday.

The public has 30 days to comment on the proposed settlement. The utility has also agreed to turn over hundreds of acres of land to the state DNR and the Bad River Band of Lake Superior Chippewa Indians for natural resources preservation.

This still leaves the tar-polluted sediments in Lake Superior, which will cost even more to clean up. The government hasn’t negotiated that settlement yet, which could add $60 million to the final price tag.

According to officials, most of the tar came from a manufactured gas plant that produced power there between 1885 and 1947. Power plants like these dotted Wisconsin and the nation for 150 years. Many of the plants left behind sites contaminated with a byproduct, coal tar, that is known to cause cancer and doesn’t break down easily.

In Wisconsin, the Ashland site is considered one of the thorniest and most expensive to clean up. Eau Claire-based NSP-Wisconsin, owned by Xcel Energy, acquired the gas plant in 1986.

Read: Toxic legacy: Century-old tar plumes under Lake Superior stir health fears — and a cleanup could be years away
Watch: An audio slideshow of Ashland residents who have lived with the contamination their entire lives
Explore: Old manufactured gas plants in your community on our 2010 interactive map.