This piece is part of The Center for Public Integrity’s Consider the Source project, dedicated to uncovering the interconnections between politics and the unprecedented flows of money in the 2012 elections.

For months, Republican Tommy Thompson, a former four-term Wisconsin governor, was the favorite to become the next U.S. senator from the state, filling the seat occupied by retiring Democrat Herb Kohl, and boosting GOP hopes of gaining control of Congress’ upper chamber.

But thanks to $3.4 million in spending by outside groups and an ongoing ideological divide within the Republican Party, Thompson may not even make it through Tuesday’s primary much less win the general election. 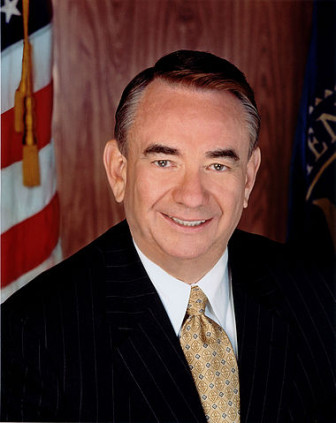 Former Wis. Gov. Tommy Thompson. Polls show him in a dead heat with Eric Hovde for a U.S. Senate seat.

Thompson’s main primary rivals are former Rep. Mark Neumann, the favored candidate of the increasingly influential super PAC Club for Growth Action, and businessman Eric Hovde, who has invested millions of dollars of his own money in his candidacy.

Club for Growth Action has spent $1.7 million on ads, more than any other non-candidate organization, with about $1.2 million going toward criticizing Neumann’s opponents.

As a super PAC, the organization can accept unlimited funds from corporations and individual donors and spend that money on advertising as long as it is not coordinated with candidates’ own campaigns.

“Wisconsin Republicans who support limited government have an easy choice,” Club for Growth President Chris Chocola has said. “Neumann is the only candidate running for Senate in Wisconsin with a proven conservative record.”

Both Thompson, who served as Health and Human Services Secretary under President George W. Bush, and Hovde have solid conservative credentials — but not conservative enough for the anti-tax, small government-touting Club for Growth and its financial backers.

A week ago, Rep. Todd Akin won the GOP Senate primary in Missouri, beating out candidates who suffered from damaging super PAC-funded advertising. While Club for Growth was not active in that election, it has seen its preferred candidates prevail in GOP Senate primaries in Indiana and Texas, where politicians favored by the party establishment beaten handily.

Of the $3.4 million expended by outside groups on ads in Wisconsin advocating the election or defeat of a GOP candidate, three-fourths has been spent on attack ads, according to a Center for Public Integrity analysis of records filed with the Federal Election Commission.

Democrats are cheering the nomination of ultra-conservative candidates by the GOP, betting that voters will prefer a more moderate choice in the Nov. 6 general election.

Including ads targeted at the Democratic candidate, independent groups have spent about $4.5 million in the Wisconsin Senate race. Most of the rest comes from $300,000 in support of Democratic candidate Rep. Tammy Baldwin and about $850,000 spent by the U.S. Chamber of Commerce opposing her candidacy.

Neumann, who served in Congress from 1995 until 1999 and also enjoys the endorsement of South Carolina Republican Sen. Jim DeMint, was once kicked off the House Appropriations Committee for bucking GOP party leaders by not supporting their military spending bill. An evangelical Christian, he once said that if he were God for a day, “homosexuality wouldn’t be permitted.”

Club for Growth’s traditional political action committee has also spent almost $55,000 on pro-Neumann messages, and, according to the Center for Responsive Politics, it has bundled more than $600,000 in contributions for his campaign. The financial assistance has been a tremendous help to Neumann, who has raised about $3.8 million, with more than $1.2 million coming from his personal wealth.

On Thursday, Public Policy Polling showed Hovde at 27 percent, Thompson at 25 percent and Neumann at 24 percent. Republican state Assembly Speaker Jeff Fitzgerald, who is also seeking to become party’s Senate nominee, received 15 percent in the PPP poll. With the poll’s 4 percent margin of error, the race is a tossup.

Hovde is a wealthy hedge fund manager whose father worked in the Reagan administration. He earned the ire of conservative activist Grover Norquist for declining to sign his pledge not to raise taxes, although the candidate says he will lower the tax rates for individuals and corporations if elected.

Hovde has gotten some last-minute help from the conservative nonprofit American Future Fund which spent about $120,000 on a pro-Hovde ad during the final week of the race. The super PAC of the tea party-aligned FreedomWorks also spent a few thousand dollars on expenditures supporting Hovde, including online ads and yard signs.

“Our activists want to send new blood to Washington — not the recycled politicians of a bygone era,” Max Pappas, the vice president of public policy and government affairs at FreedomWorks said in a press release.

For his part, Thompson has gotten support from a pro-business, nonprofit group called Americans for Job Security. In early August, the group launched a $650,000 TV ad buy against Hovde, as the Center for Public Integrity previously noted.

Nonprofit spending groups can pay for the same type of ads that super PACs run, but required to release the names of their donors.

Since leaving the Department of Health and Human Services, Thompson has sat on the boards of more than a dozen companies, mainly in the health care sector. At one of these, Thompson advocated for the use of radio frequency identification chips in humans to electronically store medical records and even pledged to be implanted with one himself (though he never did).

During the primary, Thompson has taken heat for his position on an individual health insurance mandate, a policy that he once supported but now opposes.

Thompson now says he wants to repeal the health care reforms signed into law by President Barack Obama, which include a mandate for individuals to have health insurance and subsidies to help Americans afford private insurance policies.

Reity O’Brien contributed to this report.